That means I want to make it easy to create that content anywhere, and I want it to be frictionless to drop it into the project as needed.

My solution: Markdown files I can load from the bundle using string literals. Look how easy:

Here’s how to do it.

In Swift, you use string literals all the time. Usually to initialize strings.

But Swift includes a protocol called ExpressibleByStringLiteral. Which means if your Swift type adopts it, that type can be initialized with nothing more than a string. While this is immediately convenient, it has real power for assets that need tedious boilerplate. Say, anything that needs to be loaded from a bundle.

Here’s a basic example of a MarkdownFile struct. It knows two things about itself: the name of the file used to initialize it, and any string it was able to load from a file in the bundle with that name.

On init it goes looking for a bundle resource matching the name it was provided through the string literal. If it finds one, and it can load its contents as a string, those contents are stored to rawMarkdown. If not, rawMarkdown returns nil.

This is already pretty convenient. Again, to initialize, all you need is:

But we can take it further.

The MarkdownFile struct can be responsible for converting its contents into a display representation, as well. Let’s add a computed property to parse the Markdown into HTML. I’ll be using Ink for this, but you could use any project—or convert it into something else, like NSAttributedString.

Putting it all together

With our output property all set up, we have a small, convenient API for handling Markdown files in any way we want. Here’s how we use it: 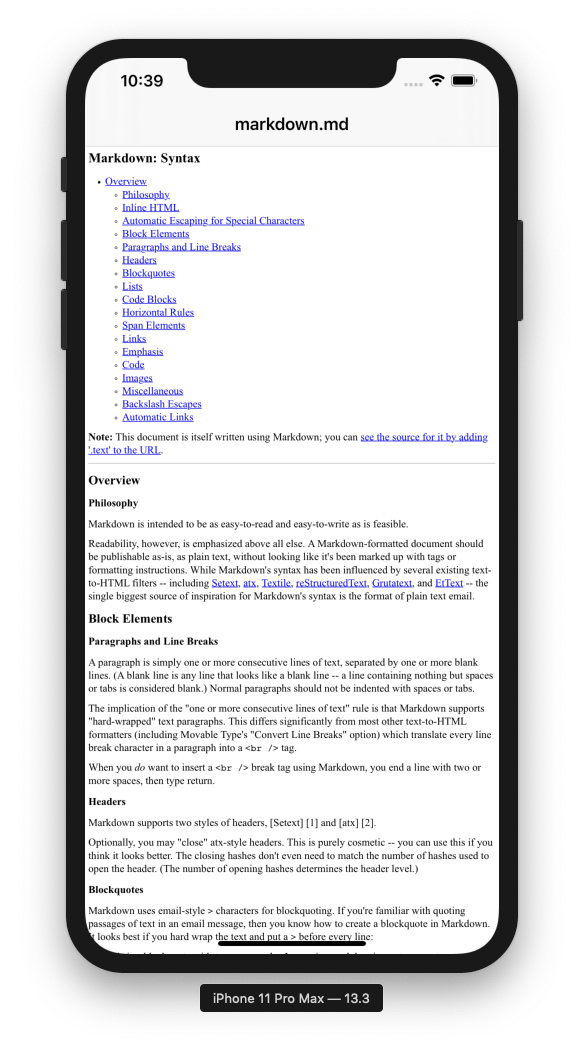 Behind the scenes, lots of stuff is happening to load and parse the file. But when you need Markdown across your project, you need only concern yourself with a filename. If you want to change any part of how this works later on, you have a single struct that’s responsible for all the Markdown behavior in your code.