DFTB+ is a software package for carrying out fast quantum mechanical atomistic calculations based on the Density Functional Tight Binding method. The most recent features are described in the (open access) DFTB+ paper. 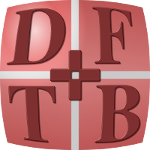 DFTB+ can be either used as a standalone program or integrated into other software packages as a library.

Alternatively, you can also install DFTB+ via the Anaconda package management framework. (This feature is currently experimental.)

Note: This section describes the building with default settings (offering only a subset of all possible features in DFTB+) in a typical Linux environment. For more detailed information on the build customization and the build process, consult the detailed building instructions in INSTALL.rst.

Download the source code from the stable release page.

You need CMake (>= 3.16) to build DFTB+. If your environment offers no CMake or only an older one, you can easily install the latest CMake via Python's pip command:

Start CMake by passing your compilers as environment variables (FC and CC), and the location where the code should be installed and the build directory (_build) and als options:

If the configuration was successful, start the build with:

After successful build, you should test the code. First download the SK-files needed for the test

and then run the tests with

If the tests were successful, install the package with

In order to carry out calculations with DFTB+, you need according parameterisations (a.k.a. Slater-Koster files). You can download them from dftb.org.

The project is hosted on github. Please check CONTRIBUTING.rst and the DFTB+ developers guide for guide lines.

We are looking forward to your pull request!

DFTB+ is released under the GNU Lesser General Public License. See the included LICENSE file for the detailed licensing conditions.