Floxels are cute, but not very smart. They live in a maze, and their hobbies are hanging around in gangs, and converting other Floxels to their colour. 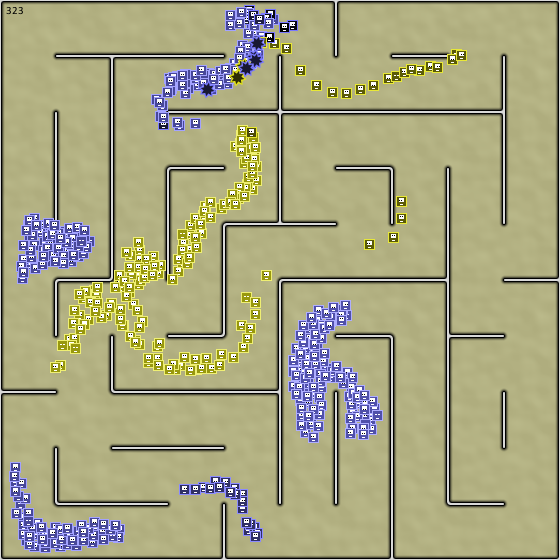 How it works (the science bit)

Floxels behave according to a mash-up of half-remembered bits of physics, hacked together with no aim other than to give a nice-looking effect.

The starting point is to fill the maze with an invisible fluid. The fluid is incompressible, simply amounting to a two-dimensional velocity field subject to a divergence-free constraint (for the most part) and boundary conditions at the maze walls. The boundary conditions might be expected to say that no fluid flows through the walls, but in fact having a bit of an in-flow everywhere keeps the Floxels from hugging the walls. In effect, extra fluid is being continuously pumped into the maze through the walls, which seems unphysical, but doesn't cause any problems mathematically.

The fluid's velocity field is calculated by solving Poisson's equation for the given boundary conditions. The solution of the equation is a potential field, and the gradient of that is the fluid's velocity field. The equation is solved at every time-step of the simulation by the multigrid method (with Gauss-Seidel smoothing). Usually the numerical solver would iterate until the solution converges, but in this case we apply the scientific principle of "it's just a game, no one cares" and save a lot of computational effort by only doing one iteration.

The Floxels themselves are particles that float (advect) in the invisible fluid. They take on the local velocity of the fluid, and go wherever the flow takes them. But the Floxels also influence the behaviour of the fluid in a way that pulls them (or at least the ones with the same colour) together into clumps.

The Floxels are charged particles, although not quite following the traditional 'positive' and 'negative' roles. Each one has an 'attractive' charge that pulls other Floxels (of the same colour) towards it. To avoid all of the Floxels pulling each other together into a single tiny clump, the attractive charge is spread over a small area around each Floxel, with a smaller 'repulsive' charge at the centre. This makes the Floxels huddle together while still respecting each other's personal space. (This balance between attraction and repulsion is similar to how nuclear forces hold protons and neutrons together in the nucleus of an atom.)

The charges from the Floxels create an electric field through the maze. At this point the laws of physics all go a bit wonky. As it happens, electric fields obey Poisson's equation, which is already being used to generate the fluid's velocity field. Not wanting to let a good coincidence go to waste, the Floxels use just one field for both the electrostatics and the fluid flow, despite physics claiming that these are completely different things. Each Floxel adds its attractive and repulsive charges as source terms to Poisson's equation for the fluid's velocity field (breaking the original constraint that the fluid flow should have zero divergence). This seems horribly, horribly wrong, but actually works quite nicely. In effect, an attractive charge causes fluid to be sucked out of the maze, pulling in any nearby Floxels, while a repulsive charge cause fluid to be squirted into the maze, pushing Floxels away.

When Floxels of different colours get close to each other they fight, but there's nothing scientific about that.

Finally, despite the Floxel simulation having originated through such a shameless misuse of scientific concepts, it's interesting to see that more deliberate work on crowd modelling actually uses some similar techniques, in particular constructing potential fields for different populations within a crowd to determine movement direction.