The Dixons seemed to have one thing in common: every couple of generations they got the urge to explore, to move to the frontier and stake their claim on uninhabited land. William Dixon’s parents or grandparents certainly did so, most likely as part of King James’ Plantation of Ireland. William and his sisters took the BIG leap and left for Penn’s Colony in the New World in 1689, even as William of Orange was landing in northeast Ireland with a large force that would eventually push King James’ Jacobite forces almost into the Atlantic! In the mid-1700’s William Dixon’s descendants moved to North Carolina and western Pennsylvania. In the early 1800’s they moved on again to Ohio just a few years after the NorthWest Territories were opened to settlers.

One byproduct of all this moving and exploring was that they were almost always on the outer edges of the normal channels of commerce. Thus, they were farmers. And one thing farmers both produce and consume in large quantites is grain! So it’s no surprise that wherever the Dixons roamed they built and operated mills.

William Dixon lived in the Christiana Hundred section of far northern Delaware. The northern border was Pennsylvania, with Christiana Creek, Brandywine Creek and Red Clay Creek as the other boundaries. His descendants built a mill somewhere south of Centerville, Delaware, on what became known as Dixon’s Run. As of 1888 it was still standing and although a “very aged structure” it was still in use by the Edwin Griffith estate.

William's grandson Simon Dixon bought land in North Carolina (from the ‘Lords Proprietors’) in 1751 He erected Dixon’s Mill on Cane Creek for corn and/or grain grinding. It was burned and rebuilt many times but always used that creek for water power. In 1925 a millstone from his mill was used as a commemorative gravestone as part of a monument erected by the Alamance County Historical Society. In 1953 a fire destroyed the remaining house and mill and it was purchased by a wealthy citizen of Durham who purportedly disassembled it down to the ground in a search for hidden gold.

In my direct line another of William’s grandsons, Joseph Dixon, moved south of the Cane Creek area in 1764, three miles south of present-day Siler City. While most of his siblings moved on to what was then Fayette County in western Pennsylvania, he and many other Dixons (Samuel, Nathan, Caleb, Joshua) bought land up and down Tick Creek/Tick Ridge for several miles. The Napton Monthly Meeting and burial ground was in the ‘middle’ of this property. One of these Dixons (Joseph' son, Jesse Dixon) built a saw and grist mill on eleven acres near the Rocky River (see map above) which operated until 1879, but had fallen into ruin by the time Ben F. Dixon visited in 1934. Nearby, on the same Dixon tract, was an Old Tory Fort dating to the Revolution. As of 1934 it belonged to the estate of John J. Raskob.

NOTE: Jesse Dixon's house has been moved and restored!]

NOTE: Nathan Dixon's spring house has been moved and restored!]

In 1800 the first Dixons moved to the Scioto River Valley of Ohio. Caleb’s three sons Daniel, George and Jonathan moved to Ross County, Liberty Township. Daniel built a mill on the Scioto River and it was still grinding in 1934. Three years later, in 1803 three more Dixons moved to the area – Joseph’s sons Jesse Dixon, Samuel Dixon (my direct ancestor), and Joseph Dixon. Joseph built a saw and grist mill on Salt Creek which feeds the Scioto River. To this day if you look at a map of Londonderry, Ohio in southeast Ross County you will find, just to the east of town, along a portion of the Salt Creek — Dixon Mill Road. And it is on that road that I found the remains of the old mill. Here are some photos I took in 2011. 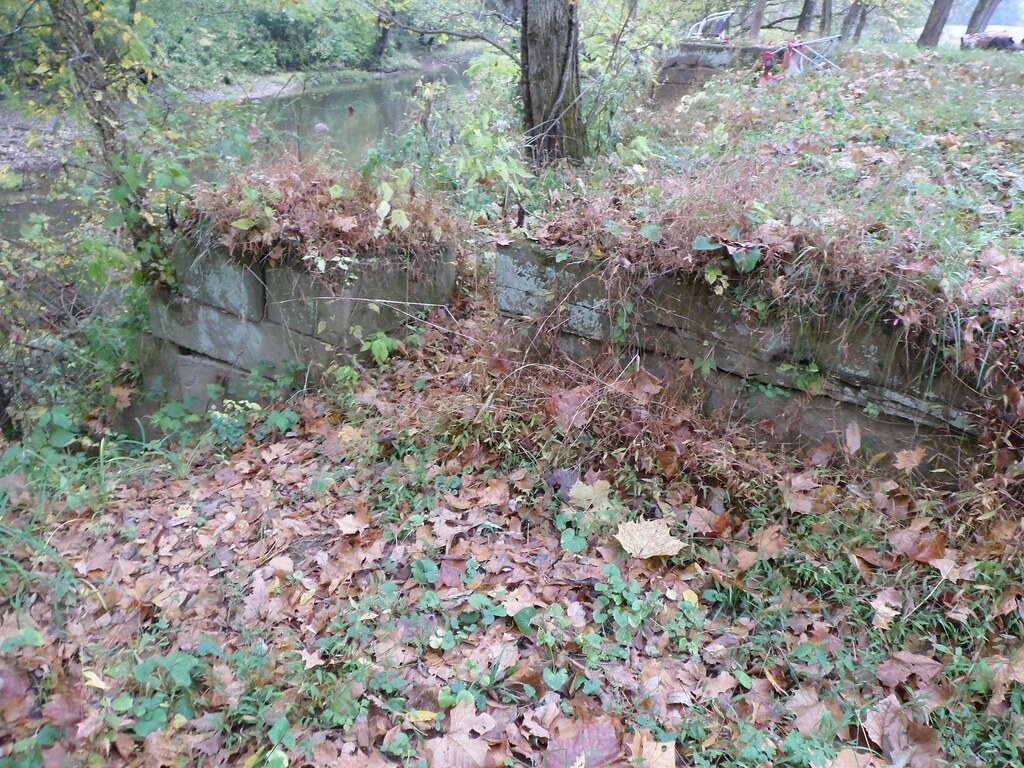