M33 Fio is a general purpose plugin for OctoPrint that extends its capabilities to include many useful feature like the ability to use a Micro 3D printer, modify a model before printing it, host a webcam stream, and much more.

There's installers available for Windows, macOS, and Linux that install OctoPrint, M33 Fio, and device drivers for the Micro 3D printer and Micro 3D compatible heatbed. These installers all add OctoPrint as a startup program and create a shortcut on the desktop that allows accessing OctoPrint's user interface.

If you already have OctoPrint installed, M33 Fio can be installed directly from OctoPrint's builtin plugin manager by searching for it in the plugin repository.

If your interested in translating M33 Fio into a different language, you just need to create a gettext PO file for your target language, translate all the text in that file, and bundle that file into M33 Fio. Creating an up-to-date PO file for a specific language can be done with the following commands. A list of language codes can be found here.

That will generate a PO file at translations/<language code>/LC_MESSAGES/messages.po. Once that PO file is fully translated into your target language it can be compiled and bundled into the plugin by running the following commands.

Stick to the following guidelines when translating text.

The slicer profile editor lets you quickly specify the quality and fill options of a print while still giving you the ability to fine tune every available setting. 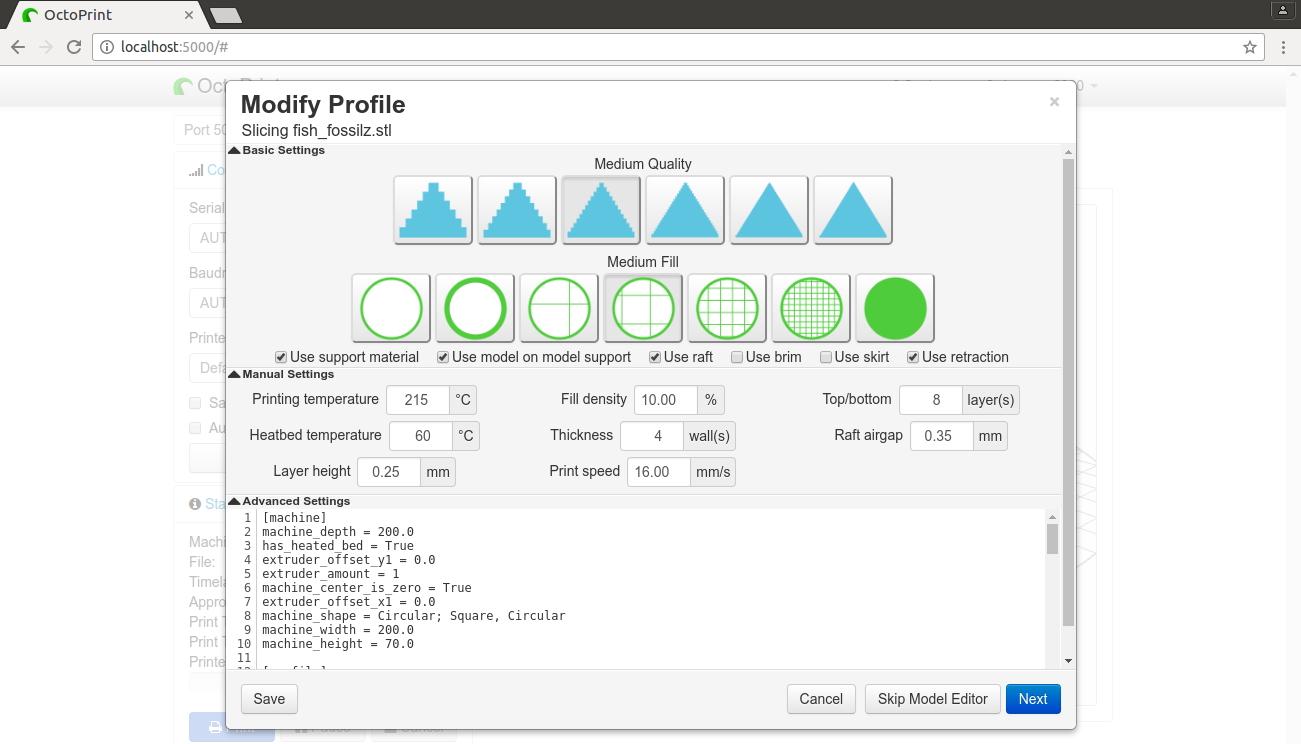 The model editor allows manipulating a model before it's sliced. It can perform all the standard operations like moving, rotating, and scaling. 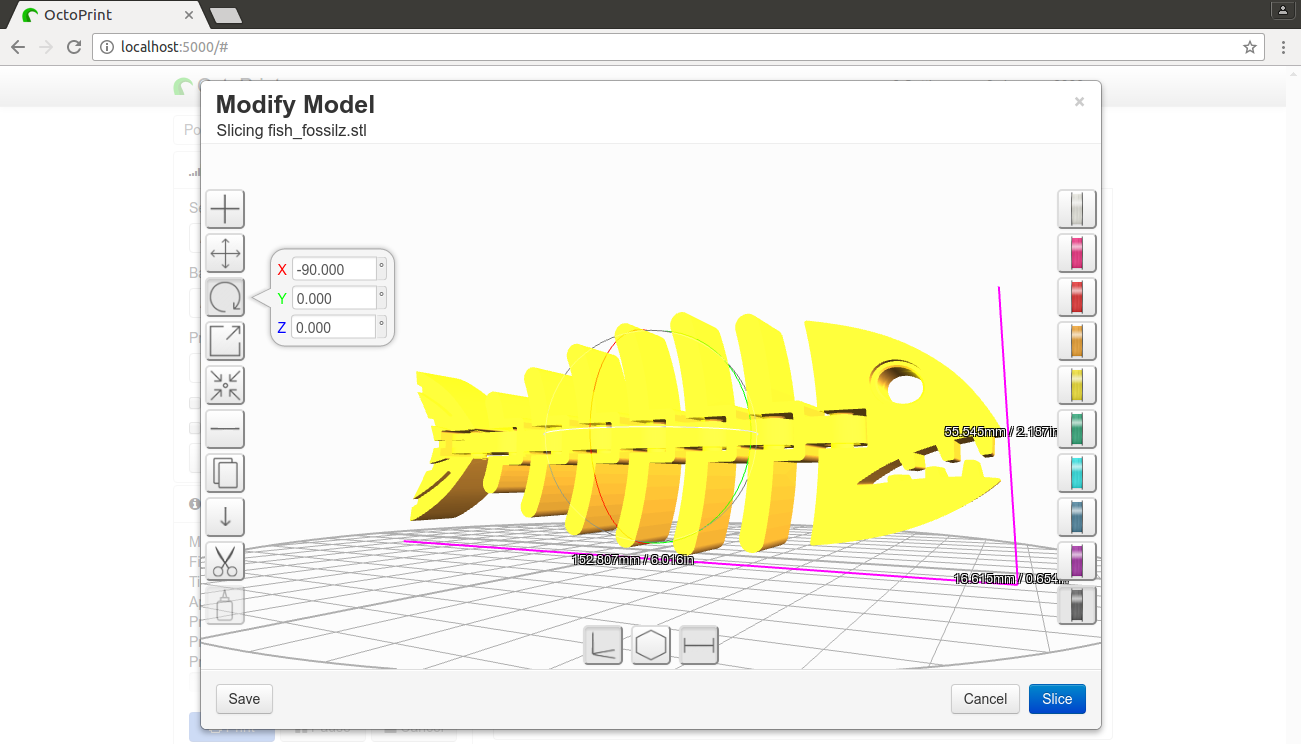 When using a Micro 3D printer, the model editor will change to visualize the printer's dimensions and boundaries. 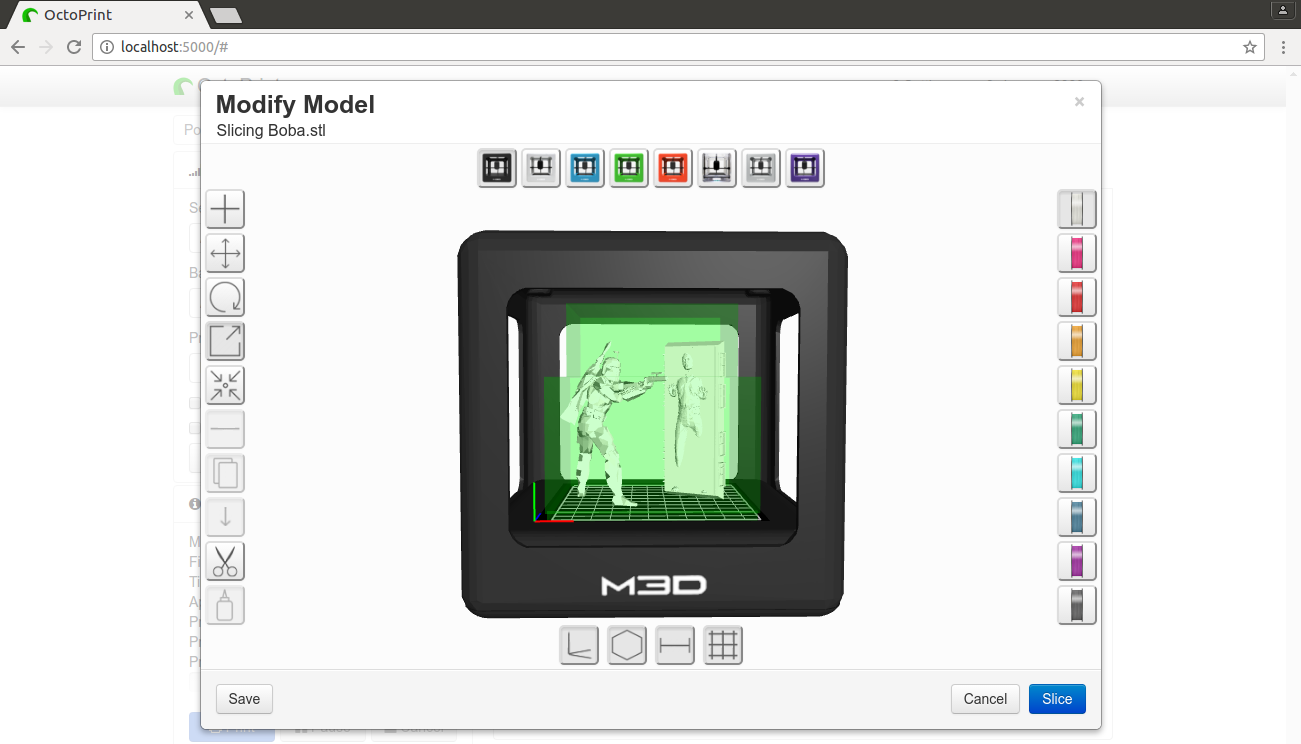 It's easy to print more than one model at a time thanks to the model editor's cloning and importing features. 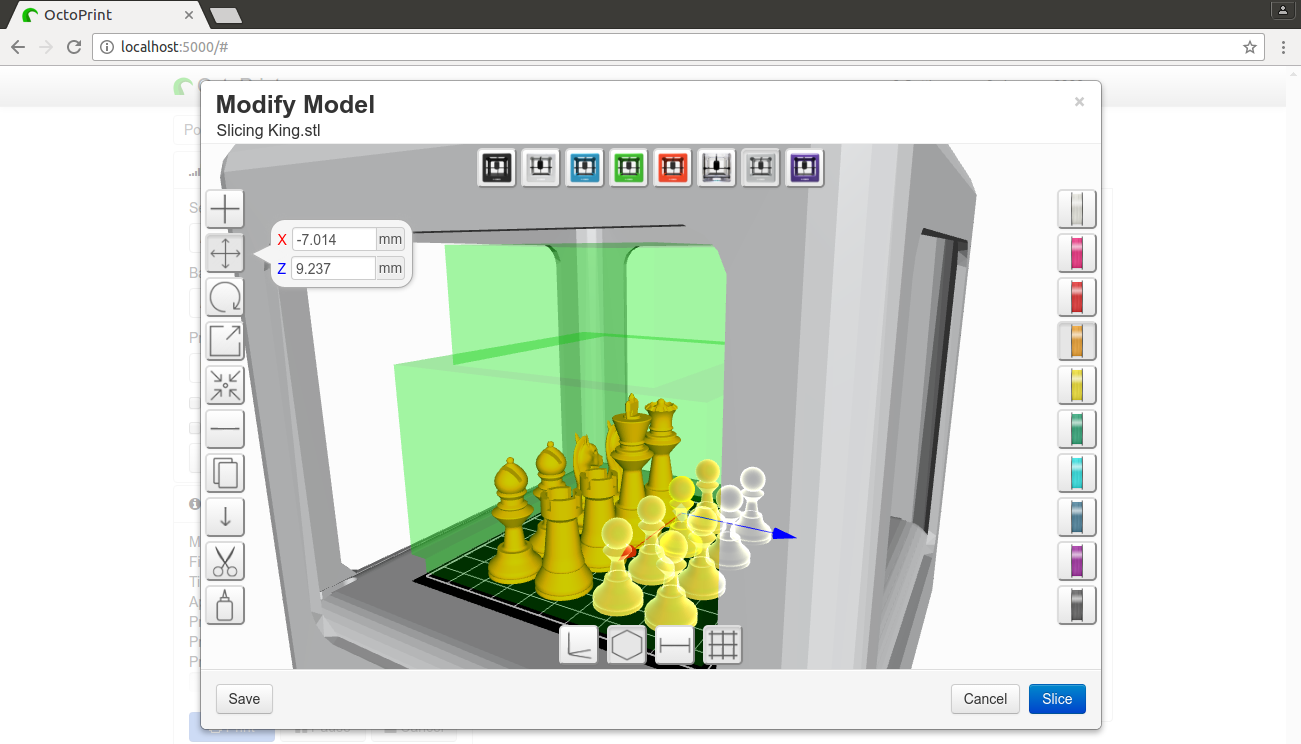 It's even possible to cut and merge models to allow printing files that couldn't normally be printed. 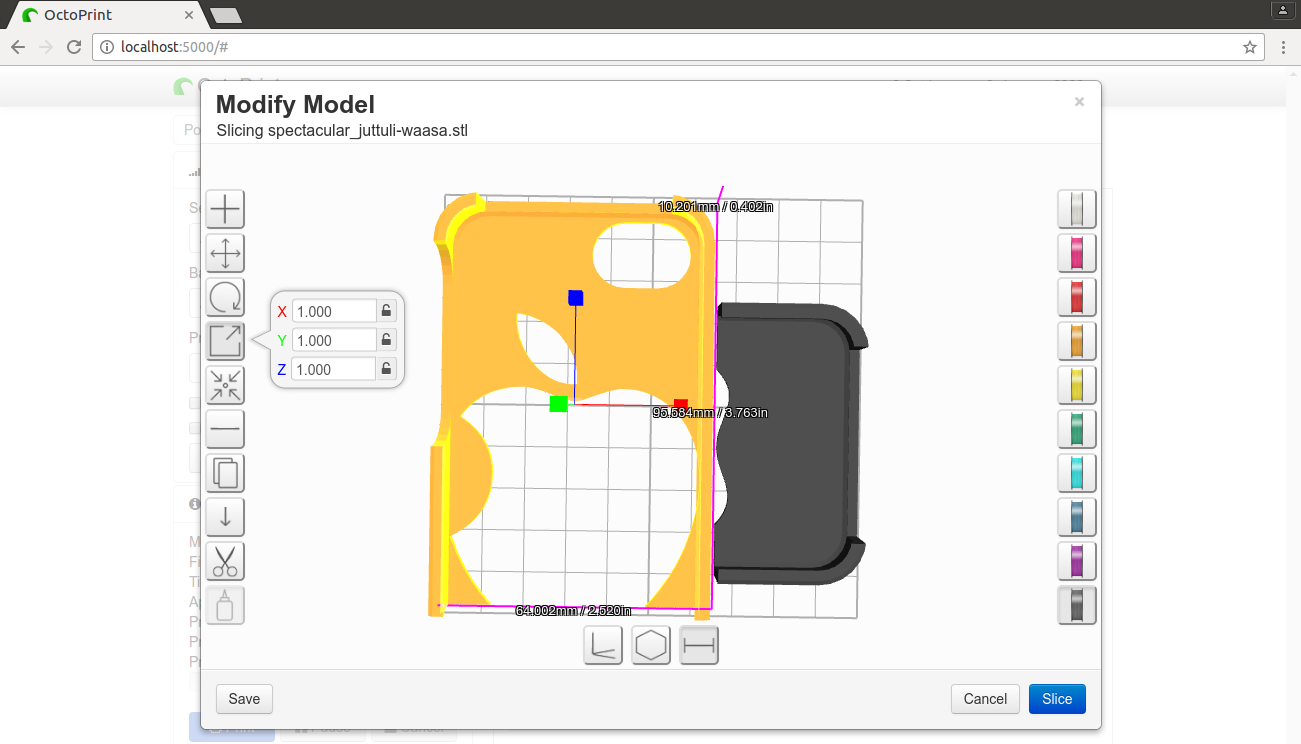 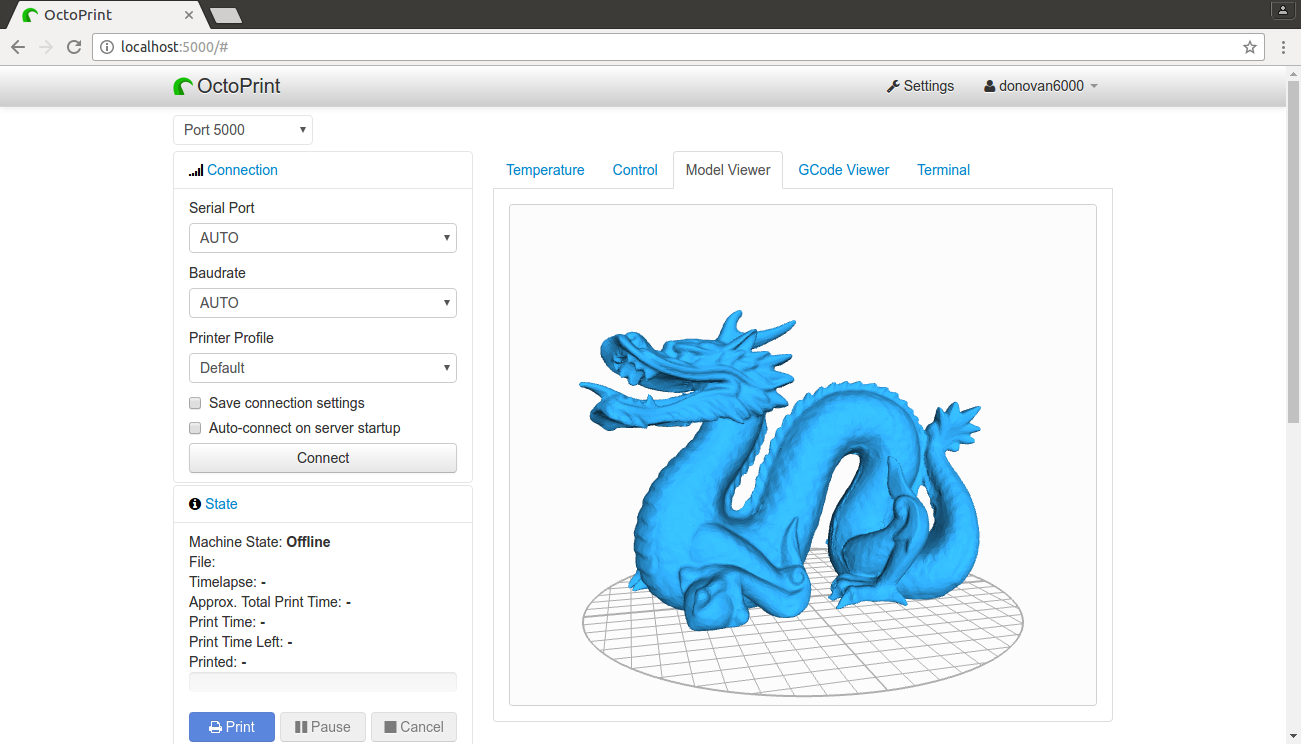 Q. I receive a message similar to, "It's recommended that you disable this server's sleep functionality while printing if it's not already disabled." What does this mean?

A. M33 Fio attempts to prevent the server that it's running on from suspending/sleeping while printing, and that message gets displayed if it is unable to do so. Don't be too alarmed by this message since it doesn't mean that the server will go to sleep. It just means that M33 Fio can't prevent it from going to sleep.

Q. How can I use this plugin with a Micro 3D printer?

A. Disable the Settings > M33 Fio > 'Not using a Micro 3D printer' setting to enable all this plugin's Micro 3D specific functionality.

Q. I can't connect to my Micro 3D printer. I receive an error similar to, "Unexpected error while connecting to serial port: AUTO SerialException: 'could not open port 'COM13': WindowsError(5, 'Access is denied.')'" every time I try to connect."

A. Close M3D's official software if it's open, and make sure no other programs are currently using the printer. If the problem persists, then restart your computer.