I love computer science and new technologies to play with. Besides that I like to keep things simple and pay attention to aspects that really mather. But I also like sharing my world and thoughts with people not involved in computer science. In fact technology is not dehumanizing. It's what makes us human.

Why? Don't you have better things to do?

The whole project was basically a wish I had during some network analysis: I wanted to visualize my results in some fancier way. There were a lot of dependencies between several hosts and I'm not good at reading raw packet data. And since graphs are an excellent data structure to represent (computer) networks I've decided to begin my journey

During some D3 experiments I wanted to capture data from the command line and send it to my D3 application. Of course I could have read the data from some CSV, JSON, whatever file but that wasn't "real-time" enough. So I had a

The data source in that case were some grep lines transformed to JSON data. In fact I was missing the linking part between mentioned components.

D3 stands for Data-Driven Documents. Its basically a JavaScript library aimed to manipulate "documents based on data". A neat side-effect of using JavaScript: You can use a browser to visualize your data. No need for extra GUI, clients whatever. There are douzens of useful examples how to use D3, especially force layouts which are ment to implement graphs.

netgrafio provides more or less tools and libraries to visualize your data regardless of its type. I tried to make the libraries OOP-friendly but as you may know: JS and OOP is really a pain. In fact I had to code a lot of JS (for the first time in my life as a coder:D). Its not perfect and it might be buggy. But it works for me

Make sure you'll have a look at the official documentation available at http://netgrafio.readthedocs.org/. 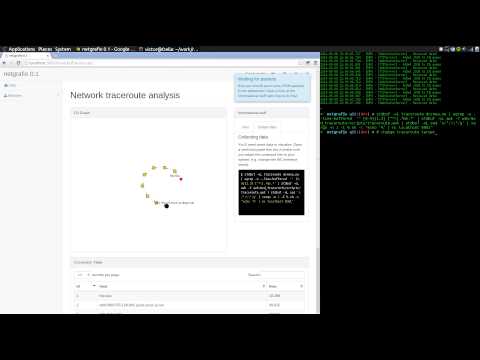 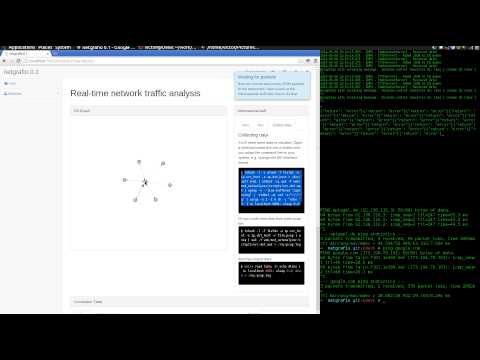 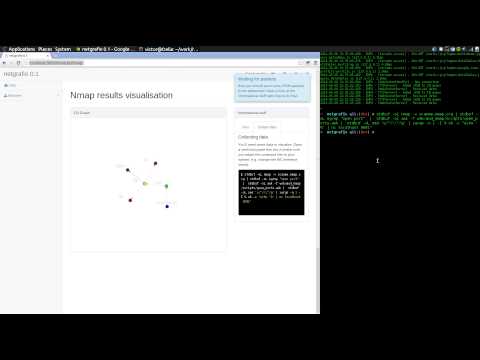 netgrafio listens for some data on a TCP socket and passes it through some WebSocket to all connected web clients. The web clients have some JS code which will receive the incoming data and apply some magic to it.

At the moment only JSON data is supported.

In order to transfer data from one socket to the another a (deadlock free) queue is being used (producer and consumer pattern).

All the relevant steps are shown in this showterm.

In order to run netgrafio several requirements on your system have to be met. Basically you'll need:

Make sure you have installed these packages on your system. Afterwards you can clone this project:

Make sure to activate the virtual environment:

Having set the virtualenv environment let's install some missing packages:

Now you're ready to start netgrafion and have some fun.

These are the basic parameters:

If you start netgrafio without any arguments, then you'll have a

Now open your browser and navigate to http://localhost:5000