This repo contains Docker files for cross-compilation of the Ethereum C++ components.

The C++ cross-build support was developed by Bob Summerwill and Anthony Cros for doublethinkco.

The intention of the project is to bring Ethereum to mobile/wearable Linux platforms for the benefit of the whole Ethereum community, current and future. Given the ubiquitous nature of ARM processors, it was trivial to extend the scope of the project from mobile/wearable to cover a huge range of devices and OSes. There is a large test matrix further down this document showing our understanding of the status on a very broad range of devices.

Here is a photo of our nascent mobile/wearable build and testing farm: 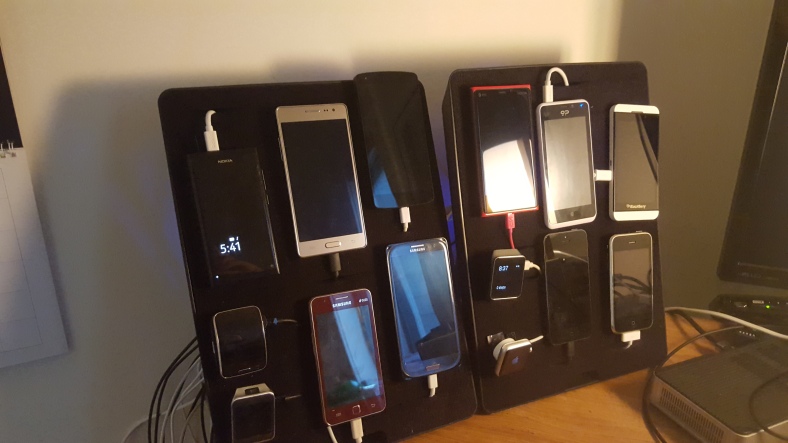 This code is released as open source software under the permissive Apache 2.0 license.

We have written blogs and articles through development which are hosted at doublethink.co. Here are some key articles

NOTE - Here is some information on ARM options in GCC.

Prebuilt releases are hosted on Github and are updated periodically.

If you use these binaries please do let us know how you get on, either via cpp-ethereum on Gitter or by logging an issue in Github. Please give as much detail as you can, including your exact device and operating system version. Thanks!

To cross-build the HEAD of webthree-umbrella from source yourself, follow these instructions.

Clone this repo and use Dockerfile-crosseth to build either 'armel' binaries or 'armhf' binaries:

If the build succeeds then you will end up with an output file in /tmp/crosseth.tgz.

Dockerfile-crosseth makes use of the crosstool-NG toolchain-building scripts to generate a cross-compiler which is then used in the rest of the build process. The cross-compiler was originally built and then used as part of the same Docker flow, but that was slow and unnecessarily, so that step was been split into its own Dockerfile-xcompiler process, which can be run in a similar manner:

If the cross-compiler build succeeds then you will end up with an output file in /tmp/xcompiler.tgz.

The results from two specific runs of this process are stored as releases on Github and are used in the crosseth build process. The "glue" for this process is in cross-build/ethereum/setup.sh:

The bulk of the remaining work is getting specific platforms and devices into a working state. For the ARM devices, that will mainly be a matter of iterating on the ABI settings until we get working binaries. Intel support should not be too hard either - just more cross-compilers.