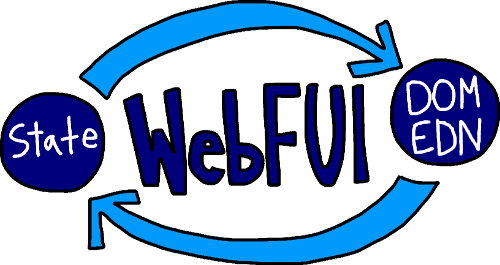 The goal of WebFUI is to let you do client-side Web programming in ClojureScript without having to ever deal with the DOM. Instead, all DOM is generated in realtime from a Clojure atom that contains just "plain old data" (called EDN in Clojure.) This "DOM EDN" is kept synchronized with a state atom that also contains EDN, where all the state for your program is kept.

You, the programmer, is only responsible for providing the functions shown in red in the picture below: 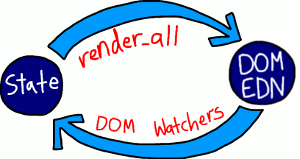 These functions in red can be written 100% in the functional style, which is one of the benefits of WebFUI. Also, having EDN as the arguments/results for all your app functions makes debugging/unit testing extremely easy. Finally, WebFUI code is extremely succinct- This fully-featured calculator app consists of only 92 lines of code, which includes all html generation!

Note: WebFUI is still an alpha project and has limitations. Currently it only supports only Webkit based browsers (Chrome, Safari, including on Android/iOS).

Here is an inverse kinematics demo written 100% in ClojureScript- Browse the source code in the webfui-examples directory. This example is pure HTML5, and using WebFUI means none of the application code directly manipulates the DOM. Click on the figure to drag it around the screen. For further demos, check out this calculator and this example of mouse interaction (drag numbers in the circle on top of each other to see what it does.)

One of the key design choices in WebFUI is that the DOM and the program state are strongly linked via a super simple mechanism: Any change to the state updates all the DOM. Similarly any changes to the DOM (Such as by the user entering text into a form field) updates all the state. This makes your code very simple, but can affect performance of your app.

However, WebFUI mitigates the inefficiency of this two-way synchronization of state and the DOM in various ways. First of all, ClojureScript has highly-efficient persistent data structures that WebFUI can use to minimize these performance penalties. Also, WebFUI performs delta calculations during DOM changes to send as few DOM updates as possible to the web browser. Luckily, all the browser vendors are currently in a javascript performance arms race, making this less of a problem over time.

Because of these optimizations, WebFUI has reasonable performance in most real-world applications (use the examples included with webfui as a guide to judge app responsiveness.) However, on some devices, such as older iPad/iPhones, Javascript is still relatively slow, and you'll notice some delays in a WebFUI-based HTML5 app.

WebFUI is best installed by using leiningen. Include the following in the dependencies of your project.clj:

Your application needs to be a ClojureScript application, and I recommend you use the lein-cljsbuild plugin for leiningen to build it.

In the webfui-examples directory you'll see examples of webfui in action. Just run lein deps;lein cljsbuild once;lein run and fire up your Safari, Chrome, or iOS browser to "localhost:8080".

Here is an entire concrete example program using WebFUI. It displays two edit fields and displays the sum of the numbers entered into those fields as a result (try it here)

How State Changes Make it to the DOM

We initialize a WebFUI app by calling launch-app ❼ and supplying a state atom and the render-all ❶ function. In this example, the state consists only of the values in the edit fields named A and B. As you can see, the render-all function just transforms the state into HTML. (using the same syntax used by hiccup.)

How DOM Changes Make it to the State

This happens by attaching DOM watchers to the DOM. You can see right here ❷ and here ❸ that there is an attribute called watch attached to the generated html (WebFUI html can have special attributes that goes beyond standard html.) This will link the edit controls to a DOM watcher declared here ❺. The DOM watcher is responsible for updating the state to adjust to changes in the DOM: In this case, it means to update the A and B fields in the state (which it does by looking up the ID of the text field which is the same as the key in the state ❻) if the numbers entered in by the user into either text field changes.

Note that the DOM watcher checks whether the fields contain valid integers with this function ❹. Because of the realtime nature of WebFUI you'll see that this automagically prevents a user from entering non-numeric values into the text fields.

These DOM watchers are fundamentally different than javascript "on__" events in that they use a "Show, don't tell" design: You don't get an event object telling you what changed, but instead get a concrete look at the proposed changes to the HTML via new-element❺ (which can be compared to the state to see what was there before) that shows you what changed.

Pinpoint Changes to the State

As we've seen, in WebFUI the DOM is updated in a wholesale fashion from the program state, and the program state is updated wholesale from the DOM, as well. However, usually when we update our program state we want to do it in a pinpoint fashion. Because of this, the state returned from a DOM watcher is actually a delta applied to the program state: If a key is left unmentioned, it is left with its previous value, in a recursive fashion. To understand more about the model used for updating state using diffs, read the section on webfui.state-patch in this document.

WebFUI has a plugin mechanism for adding support for different types of user interaction. Plugins are used to add support for mouse actions, calculating scroll bar positions, and many more plugins are planned for the future.

Read the following document to learn more about the design of WebFUI and the plugin architecture.

To learn how to handle mouse interactions in WebFUI, please check the section on mouse support in this document.

Distributed under the Eclipse Public License 1.0 (http://opensource.org/licenses/eclipse-1.0.php), the same as Clojure.