Dr. Twoot is a significant fork of Peter Krantz's Twoot, a customizable Twitter "web app" that sits on your hard disk instead of in the cloud. The code comprises HTML, CSS, and JavaScript (jQuery) files that are turned into a site-specific browser (SSB) application on the Macintosh through Fluid. The main advantages of using Dr. Twoot over an SSB pointed at twitter.com are:

When Twitter removed Basic Authentication in August of 2010, Dr. Twoot could no longer work as a standalone client. It now requires a running web server on your local machine and a CGI script to make the OAuth requests to Twitter. Here's what you need to do: 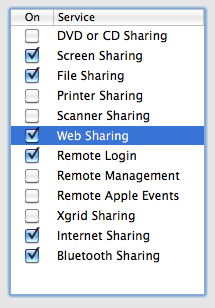 Now you're ready to configure and create the site-specific browser.

You'll need to change Line 7 of the file twoot.js,

so it has your Twitter user id. To get that information for your account, run the config.py script from the command line:

You'll be prompted for your username, and the appropriate Line 7 for your account will be printed out. Copy and paste into twoot.js, replacing the dummy line shown above.

Note: config.py connects to Twitter to get your user ID number, so you'll have to have an Internet connection (and the Twitter site itself will have to be up and running) for the script to work.

After twoot.js has been edited and saved, launch Fluid and point it to the twoot.htm file: file:///path/to/twoot.htm. Give the SSB a name ("Dr. Twoot" is a good choice), tell it to use one of the PNG files as the icon, and let it make the new application. 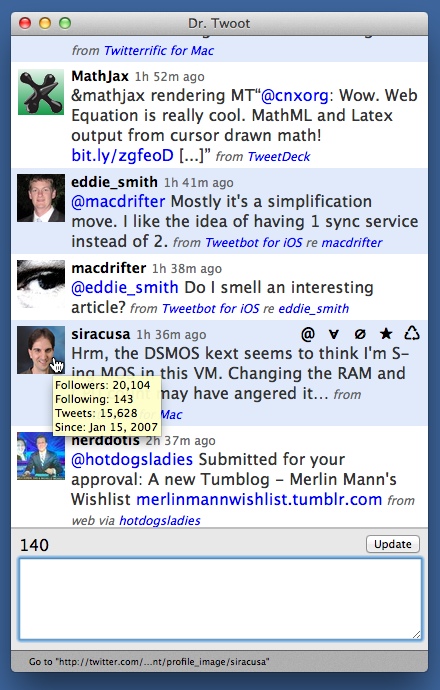 The style can be changed pretty easily by editing the style.css file. Functionality can be added/altered by editing twoot.js. Dr. Twoot, like Twoot before it, makes heavy use of the jQuery library.