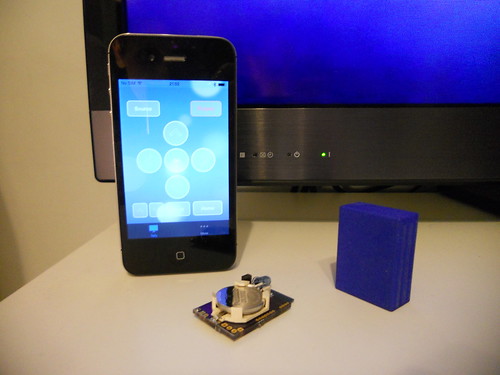 Many home entertainment devices come with some kind of remote control. If we have several of such devices, we would end up with lots of big and sometime ugly remote controls in the end. Maybe it would be nice to control all devices only by smart phone with as a simple application.

The aim of this project is to allow controlling TVs, DVD players, VCRs and similar devices using a smart phone application.

Logitech has Harmony Ultimate hub product that allows controlling various devices using smartphone as universal remote [1]. In this case, the special hub is used that emits infrared commands to devices, and accepts commands from the smart phone. The more different approach is implemented in the RedEye product [2]. The smart phone gets some additional plug that plugs into an audio jack and contains infrared emitter for sending commands from smart phone application.

Initially, each controllable device has its own remote and if we want to control it we have find the correct remote and use it. It gets complicated when there is a need to access several functions form couple devices at once (for example turning all stuff off, in some cases it’s easier to just plug out main power cord). 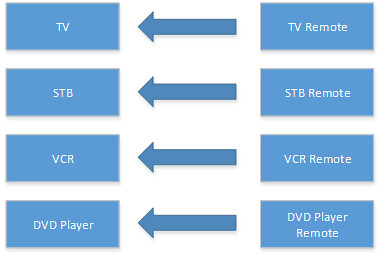 The idea is to replace all remotes with one Bluetooth device (like universal remote), but instead of pressing the device buttons, the special application could be installed on the iPhone, iPad or Android smart phone. Then the application would send commands to the Bluetooth device, and that device would re-transmit commands to TVs, VCRs and other devices.

For this project the Bluetooth device, iOS and Android applications are constructed. For the phone communication with the device the Bluetooth Smart (low energy) protocol is used. The main choice of this type Bluetooth is that its works in the low power mode. The Bluetooth device can work for a long time on a single coin (CR2032) battery. Also iOS application does not need any special certification on the Apple side and hardware does not need any specific (and expensive) Apple authorization chip (thus no need for MFi Program, hardware and licensing).

For building application the Bluetooth low energy profile has to be specified. The Bluetooth device defines one service for controlling remote devices. The service has unique id and consist of 3 attributes:

TV or other equipment accepts commands modulated as the IR signal at some frequency. In order to send commands to a device, it’s needed to know the commands, and also those commands has to be modulated on some signal. Luckily, Texas Instruments provides RemoTI [5] library, which has some handy HAL drivers for modulating and sending commands over various infrared protocols. It contains 3 implementations for different infrared signal modulation types, such as:

For sending a remote command to TVs or other devices only the command code is needed when the RemoTI is used. The command consists of 2 parts: a device type and an actual command. For example sending a command for a Sonny TV, the application has to send a command “1 + 12”. Where 1 is device type (1 specifies that it’s a TV) and 12 is on/off command.

Command codes can be obtained by studying device, its documentation, its remote control type or searching and downloading command codes from the Internet. It’s also possible to build some small device what would capture and output commands from an existing device remote. Here is a simple the Arduino sketch for obtaining commands and corresponding circuit. 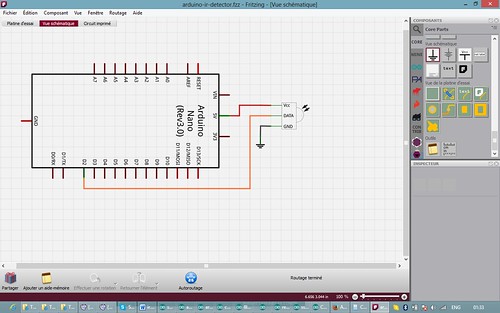 The circuit just contains of an infrared detector (depending on a remote type, the detector of required de-modulation frequency has to be selected. For working with Sony remotes it has to be of 40 kHz, for Nec – 38 kHz , and for Philips – 36 kHz), Arduino and some power source. The circuit is easy to assemble: the first pin goes to a power (+5V), the third pin is connected to the ground and the middle one outputs the signal to the Arduino. Now only the Arduino code is needed to capture the commands and print them. The Arduino code uses IR library. The code is the following (It’s the default IR library sample with additional command code and address extraction, code is available here):

After the desired codes are captured the iOS controlling application can be built that is capable of sending commands to the Bluetooth device.

Hardware prototype Before building actual device, it’s a good idea to build its prototype on the breadboard, in order to check solutions feasibility. Some interesting aspects to check are: what is the transmission rage, where the Bluetooth device could be placed, and what usable distance can be from the device to a TV, what usable distance could be from a smart phone. The solution prototype was built using Arduino and a Bluetooth classic module. The prototype was assembled on a bread-board. The simple Arduino sketch was used for controlling infrared led along with a simple android application. 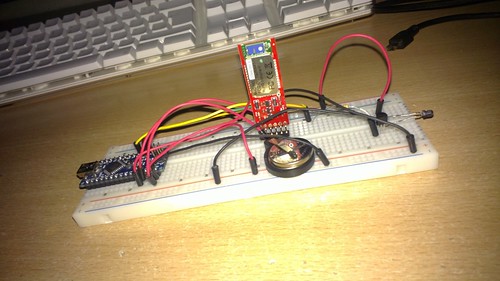 Then the feasibility of implementation was verified using Arduino prototype, the real device and its PCB was designed using Fritzing [8] and manufactured at the OSH Park [9]. 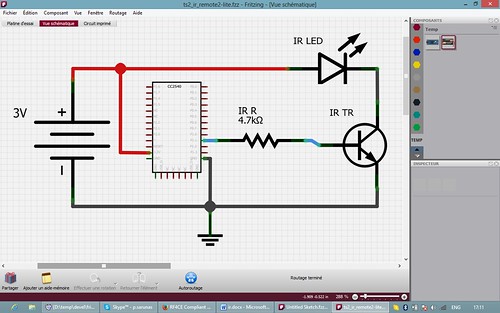 But before manufacturing actual PCB, it’s a good idea to build sample on the breadboard and check if the solution actually works:

The actual module was used, some connections were made on the bread-board, but the actual module was wired directly by thin wires as it had no breadboard friendly connectors.As breadboard prototype was ok, the actual PCB was produced. The frizzing tool was very helpful; its core is build using the MVC design pattern, so modules view has PCB, schematics and breadboard views. Those views allowed checking if prototype matches PCB design, and schematics are correct. 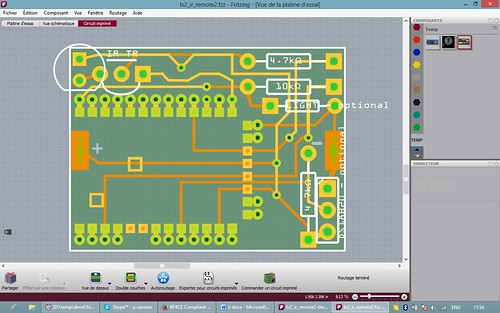 The produced PCB is just of 2x3cm size and it’s only powered by a cell battery. As there were some free space left on the PCB, temperature and light sensors were added. 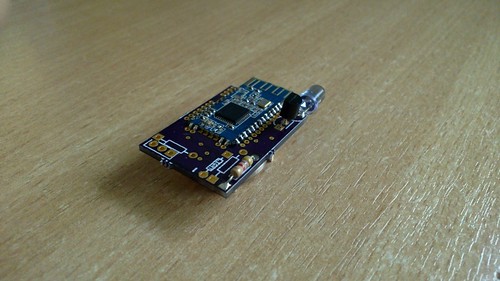 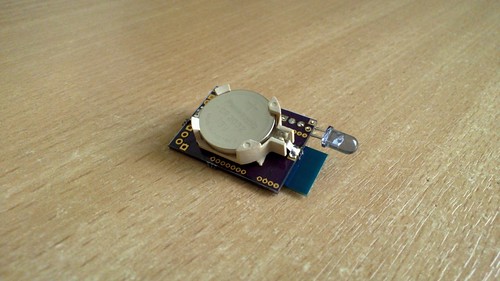 We have persuaded our college at the office to do soldering job, as we have no skills in soldering area at all. And the final assembly looks nice.

The code was developed using IAR tool, the trial version with code size limit is sufficient. The PCB has a row of vias near each Bluetooth module pin. It was decided not to solder programming header, but just to plug jumper wires into corresponding vias and plug them into the programmer. 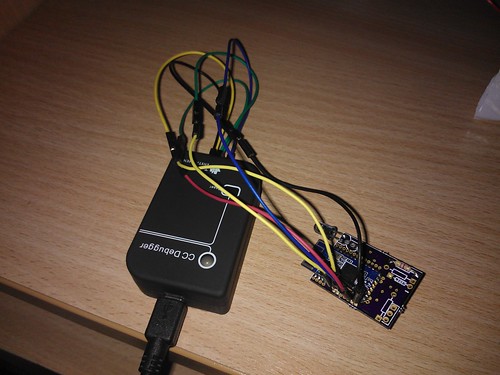 The firmware was developed in the way that after the its initial upload, the new versions could be uploaded over the air using Texas Instruments OAD profile [10]. The firmware is organized into the main application, Bluetooth Smart profile, infrared drivers (copied from RemoTI stack) and module for sending infrared commands. The firmware project source code is available here. 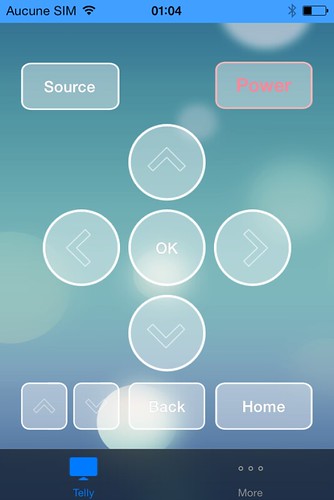 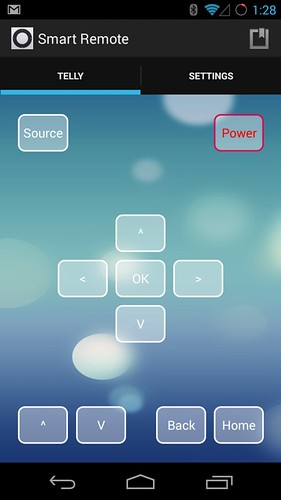 The device can be used without any enclosure. But it could be more appealing to have some enclosure. So for this device the case was designed and 3d printed. The most important part is to leave a hole for the infrared led. TV remotes have some black, semi-transparent plastic in the front side, that allows signal to pass through. For this device the small plastic enclosure was built with the opening in the front for inserting Bluetooth device and leaving an opening for the infrared led. 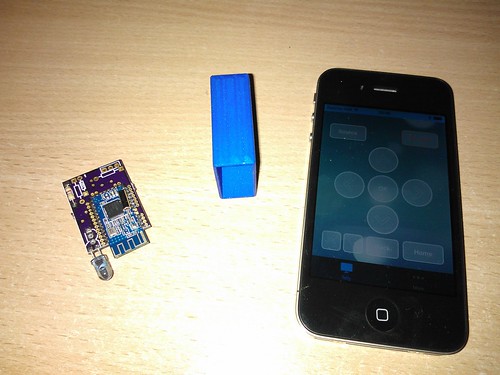 The Case was printed using the Shapeways [11] service. The enclosure design is provided here.

It’s hard to assume that software and hardware just works as expected by looking at its source code. So testing comes to help. We have defined the criteria for solutions suitability for use, and some procedure for evaluation it. The main testing is the integration testing when we test if hardware and software components work together. Here are some of tests:

If those tests are passed, it is possible to assume that the constructed solution works and can be used.