This is an Android app that reimplements some of the behaviors specific to the Samsung Galaxy S4, so that they can be used with alternative ROMs, such as CyanogenMod, where the proprietary Samsung components are not available. At this time, these behaviors are:

This app is a "clean room" implementation. I'm not extracting Samsung's binaries from the stock ROM, or anything like that, just attempting to reimplement the functionality that I like. 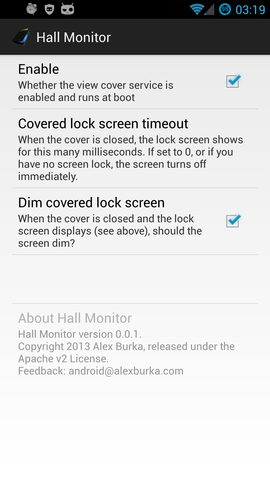 Important: The preponderance of the evidence so far indicates that there should be no problem running this app on any Galaxy S4, and even on the S4 mini/mega. However, I have only personally tested it under the following configuration(s):

Others have tested this under the following configuration(s):

If you test this on something other than the above (including another carrier's S4) and it works, please let me know! You can contact me at android@alexburka.com. If it doesn't work, please file an issue here. But no promises, because I can't really do tech support for devices I don't own.

This should serve as quick guide if you're trying to find your way around my code.

Happy hacking! File an issue or contact me at android@alexburka.com with any questions.