Learn how to use docker.io containers to consistently deploy your apps on any infrastructure.
Find file

Learn how to use docker.io containers to consistently deploy your apps on any infrastructure.

Have you ever struggled to get your developer environment set up as a new user on an existing project? Or have you ever had difficulty reproducing a bug or error that another team member is experiencing? Or that only exists in your production environment but not in your development environment? If you have, then you have encountered some of the difficulties that can arise when code is run in different environments. Docker is the solution to these problems as well as offering a host of other benefits.

Docker containers offer the isolated environment advantages of running a virtual machine, but are more lightweight, portable, scalable and have less overhead/hassle.

A container is a standard unit of software that packages up code and all its dependencies so the application runs quickly and reliably from one computing environment to another.

Once you've installed Docker, opened it and signed in to your account you can now open a command-line terminal, and try out some Docker commands.

You should see something like this in your terminal: 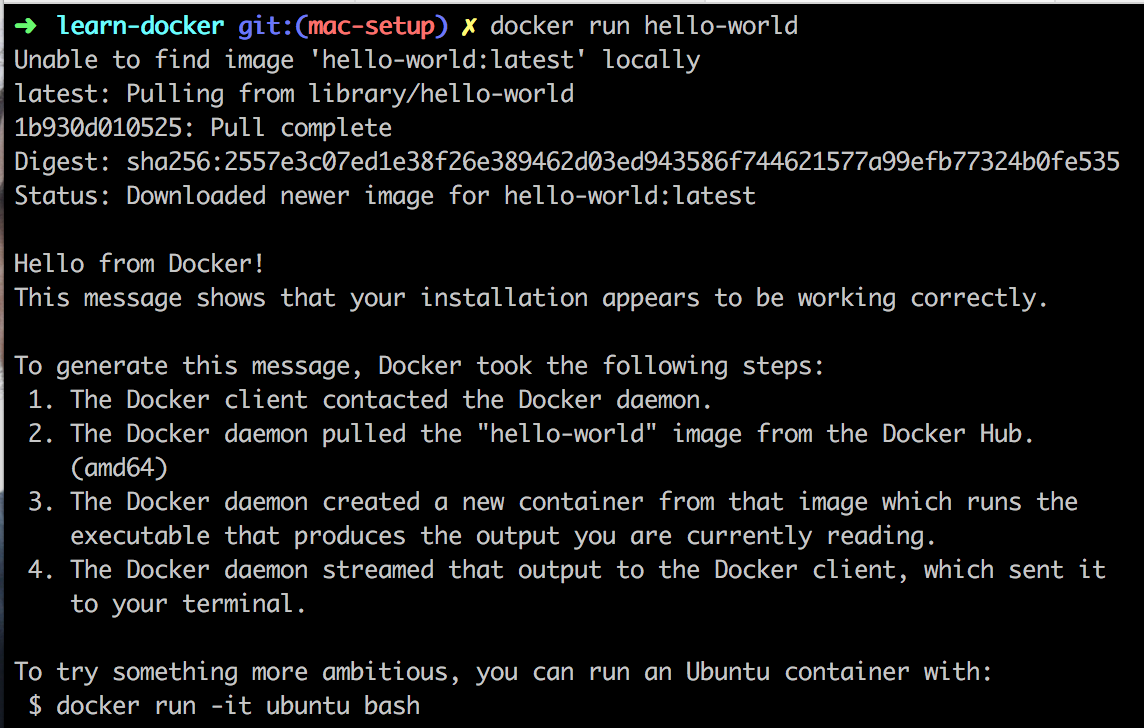 As it suggests, next try to run an ubuntu container (only do this on a fast internet connection as its going to download 65mb ubuntu image)

This will boot the Ubuntu image and log you into the container's bash. You can confirm that you are in a Linux bash by running the following command: cat /etc/os-release

See: https://docs.docker.com/engine/reference/commandline/container_ls/ for ways to make this command more specific.

And for even more detail, run docker info

Run the Dockerfile in this repo

Then run the image as a container:

Exec (for running a command in a running container)

More info on a specific container

To get more detail on a container type: docker inspect {imageid}

The complete output of this command is in: /sample-docker-inspect.txt

Kill a Container by ID

For some reason I'm unable to access the nginx server running inside the docker container ... looked at:

Test that your nginx configuration is valid (doesn't have errors)

You can create or run a Phoenix application by using the following Dockerfile:

This will create a container with Elixir, Node.js, Elm.

You can then use the following docker-compose.yml file to use Postgres with your application:

Make sure to update the database configuration in the Phoenix application to reference the Postgres service name (ie db), for example:

Use docker-compose if you want to run commands, for example to create the database:

This repo has walked through the basic set up of Docker containers. To deal with managing multiple containers there are container management facilities or container orchestration platforms. These facilities are useful for:

Docker offers its own such facility called Docker Swarm. Another popular open source platform is Kubernetes. Kubernetes must be used in conjunction with Docker containers, it is not a complete alternative.

Docker Swarm and Kubernetes both have their pros and cons. Deciding which one to use comes down to what is best for your project. But as a very brief summary, Docker Swarm is considered easier to adopt with better usability than Kubernetes. Whilst slower to initially learn, Kubernetes receives praise for its ability to scale at speed for larger projects and its flexibility.

To find out more see: