An Arduino library that times consecutive button presses to calculate tempo / BPM. Corrects for missed beats and can reset phase with single taps. 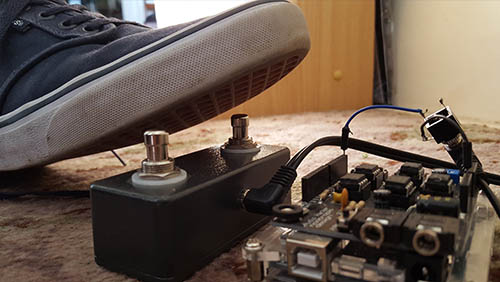 An Arduino library that times consecutive button presses to calculate a tempo. Corrects for missed beats and can reset phase with single taps.

How do you use it? Just tap a button in time with some music. This'll work out the tempo and keep track of it internally. Single taps will reset the phase so the bar begins from the start again. Mutiple taps will average out and give you a more accurate tempo reading. If you miss a tap this will detect it and prevent a tempo change.

In the Arduino IDE, go to Sketch > Include libraries > Manage libraries, and search for ArduinoTapTempo. You can also just use the files directly from the src folder.

Look at the example in the examples folder for an idea on how to use it in your own projects. The source files are also heavily commented, so check those out if you want fine control of the library's behaviour.

Call this each time you read your button state. Accepts a boolean indicating if the tap button is down.

Returns the number of beats per minute.

Returns the length of the beat in milliseconds.

Returns a float from 0.0 to 1.0 indicating the percent through the current beat.

Returns true if a beat has occured since the last update(). Not accurate enough for timing in music but useful for LEDs or other indicators. Note that this may return true in rapid succession while tapping and setting the tempo to a slightly slower rate than the current tempo, as the beat may occur and shortly afterward a new tap triggers a new beat.

Returns the time of the last tap in milliseconds since the program started.

Other methods and settings

ArduinoTapTempo calls groups of taps 'chains', and calculates the tempo by averaging a number of taps in a chain. Chains are active for a short while after each most recent tap, and while they are active they will count new taps as part of the current chain and average the timing of new taps together with previous taps. The chain is reset if a tap occurs once the chain is no longer active, and the tempo calculation will then be based off 2 or more taps in the new chain.

The current chain of taps will finish this many beats after the most recent tap. It accepts an integer greater than 1.

Sets the maximum number of most recent taps that will be averaged out to calculate the tempo. Accepts int from 2 to 20. Increasing this allows the tempo to be more accurate compared to your tapping, but slower to respond to gradual changes in tapping speed. Response to different tapping speeds in new chains is unaffected.

ArduinoTapTempo has skipped tap detection turned on by default. If you miss tapping a beat but tap the next one it'll recognise that a tap was meant to occur and prevent the tempo from dropping abnormally. Skipped taps are detected when a tap duration is close to double the last tap duration.

This sets the lower threshold, how early your next tap can be after a missed tap. It accepts a float from 1.0 to 2.0.

This sets the upper threshold, how late your next tap can be after a missed tap. accepts a float from 2.0 to 4.0.

Sets the maximum beat length permissible. If a tap attempts to set the beat length to anything greater than this value, the new tap will start a new chain and the tempo will remain unchanged.

Sets the minimum beat length permissible. If the average tap length is less than this value, then this value will be used instead.

An Arduino library that times consecutive button presses to calculate tempo / BPM. Corrects for missed beats and can reset phase with single taps.