A 100% Java 2D collision detection and physics engine. Designed to be fast, stable, extensible, and easy to use. dyn4j is free for use in commercial and non-commercial applications.

The project is comprised of the main project and tests managed here and two others:

dyn4j comes with a lot of features and extensibility, but getting started is easy. If you are looking for a quick start, take a look at the following video. 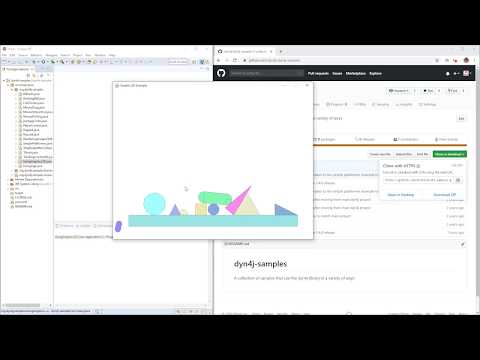 Step 1: Add dyn4j to Your Project

If you are not using Maven you can download the jar from either of the links above.
NOTE: Releases are no longer being created as of 3.4.0.

A body is the primary unit of simulation and completely rigid. A body is comprised of many fixtures or shapes. While the shapes of dyn4j are all convex (and must be), a collection of these shapes can be used to create a body that is not. A body can be initially placed in a scene by translating or rotating it. Once the shape(s) of a body is defined, it must be given a mass by calling a setMass method. The mass type is typically MassType.NORMAL or MassType.INFINITE. When set to NORMAL, the mass will be calculated based on the shapes. An INFINITE mass body might represent a floor, ground, or something unmovable.

A joint is a constraint on the motion of one or more bodies. There are many joint types that serve different purposes. Generally, joints are used to link bodies together in a specified way. Bodies can have multiple joints attached to them making for some interesting combinations.

Unlike this example, a GUI based application you would call the World.update(elapsedTime) method in it's render loop. Either way, each time the world is advanced forward in time (which may or may not occur when using the World.update(elapsedTime) methods) the bodies added to it will be moved based on the world gravity (if any) and will interact with other bodies placed in the world.

From here you should take a look at the dyn4j-samples sub project to get a jump start with a simple Java2D framework. You can also check out the documentation here.