When I set out to create a Pluralsight course about my favorite build tool, Cake, I needed a sample app for my demos. The idea behind the course was to take an existing web app and show you how to use Cake to create a build and deployment pipeline for it from scratch. By the end, you'd have a Cake script that can take the application all the way from source code to software running on a server. That idea eventually turned into Building and Deploying Applications with Cake, which you can read more about here.

Right from the start, I had three requirements for my demo app:

I wanted an app that felt realistic—alas, not the usual ASP.NET MVC sample app—but that was also simple enough not to become a cognitive burden. The last thing you want in a course is having to spend half the time explaining what your demo app does.

I could have gone for one of the classics like the fake CRM or the online pet store, but that would be boring. Remember, I wanted to do something fun and, possibly, useful.

So, I decided to make a URL shortening service: meet Linker.

Linker consists of a RESTful API backed by a relational database and consumed by a web frontend. Here's an overview: 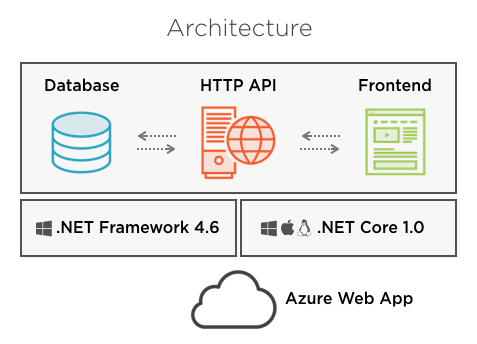 This repository contains the complete source code, with tests and everything. There's also the complete build and deployment script written with Cake.

Cake is cross-platform and so is Linker. Originally, I wrote two versions of it:

You'll find the Windows-only version in the pluralsight-net4.6 branch, while the cross-platform one is in a branch called pluralsight-netcore1.0. These are the exact versions featured in the Pluralsight course and will stay as they are for reference.

As time went on, however, I realized that if Linker was going to stay valuable, it had to be kept up-to-date with the current technology. So, I eventually upgraded the .NET Core version from 1.0 to 2.1 LTS.

.NET Core is clearly the future when it comes to .NET development; it's also cross-platform, leaving little value in maintaining a separate version that only runs on Windows. For these reasons, I decided to make the .NET Core 2.1 version the canonical version by merging it into master. That became the officially maintained version of Linker going forward.

What to Do with It

Although Linker came into existence to serve the needs of my Pluralsight course Building and Deploying Applications with Cake, it has proven to be equally useful for other educational purposes. In fact, I'll go as far as to say that if you ever find yourself in need of a demo app for a course, a talk or a workshop, feel free to use Linker. To put in one sentence:

Linker is a simple and complete ASP.NET Core web application, ready to go.

Of course, if you would like to improve it in any way, pull requests are always welcome.

You can see Linker in action in the following online resources: