R has a number of existing Kalman filter packages which are all very noteworthy in their own right. A comparison was provided by this JSS paper from 2011.

Yet I had a need for something both simple and fast at the C++ level.

The EKF/UKF toolbox for Matlab proved to be a wonderful source of excellent code that was well documented (see [this 130 page pdf manual]http://becs.aalto.fi/en/research/bayes/ekfukf/documentation.pdf()), under a suitable license and covering both simple examples as well as promising extensions.

This example is not described in the pdf manual, but included as demo kf_sine_demo.m within the EKF/UKF sources. A signal is provided via a sine wave plus random noise, and a linear Kalman Filter is used to smooth and filter the series. Our variant demo/kf_sine_demo.R reproduces the demo via the following chart 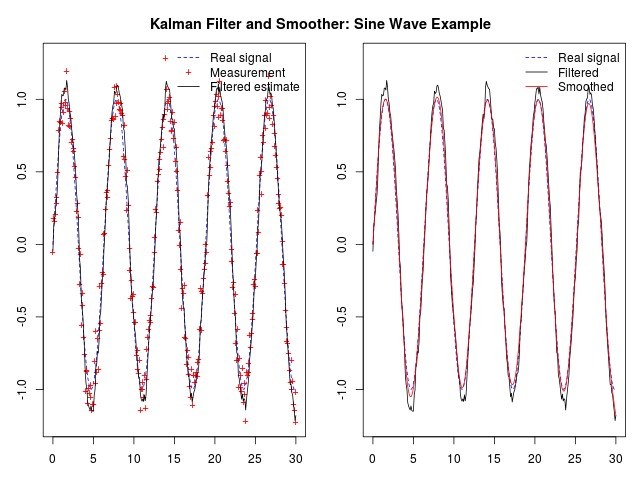 This demo is described in detail in Section 2.2.4 on pages 11 to 15 of the EKF/UKF Documentation; the animation is part of the corresponding Matlab code in kf_cwpa_demo.m. We show the two final charts which provide animations of the smoothing and filtering in our version demo/kf_cwpa_demo.R:

Working, but still far from complete. We currently support two demo scripts based on linear smoothers and filters. Additional functions should get added over time.

The EKF/UKF Toolbox for Matlab was written by Simo Särkkä, Jouni Hartikainen, and Arno Solin.

Dirk Eddelbuettel is writing and maintaing this package by porting it to R and C++ via Rcpp and particularly RcppArmadillo.