Console framework is cross-platform toolkit that allows to develop TUI applications using C# and based on WPF-like concepts. 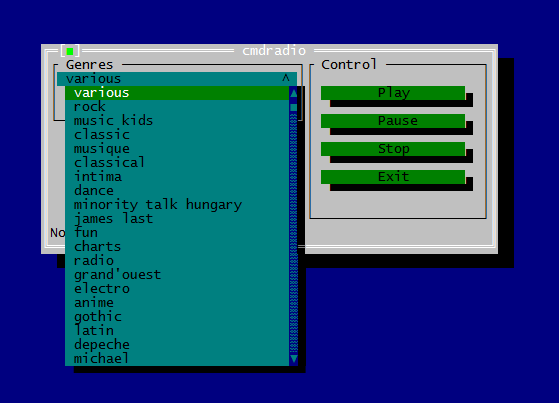 To build a library with examples you can use standard dotnet tool:

It should work in all platforms.

There were two IDEs where I've worked with .NET Core project: Visual Studio 2017 Community and JetBrains Rider. Both of them works well with this source code.

After that you can copy binaries from ./libs into directory with examples. Or you can use binaries of libtermkey from zip in /native directory.

Libc and ncursesw are distributed in binaries in vast majority of Linux distros and OS X, so all you need is locate actual binaries and copy them in the output directory if the target machine does not have them, for example, if you are Mac OS X user, you will need to install libtermkey.

Console Framework expects that libraries will be available strictly by these names on Linux. If your system already has symlinks libc.so.6 and libncursesw.so.5, you can skip this step.

Support of Mono runtime have been discontinued. If you need library for Mono, you can download previous releases. All further development will be continued for .NET Core runtime only.

Standard terminal emulator is not very good for console applications deals with mouse. My recommendation is to use ITerm2. ITerm2 provides a good emulation with mouse support. If you want to see how console framework renders in various Mac emulators, visit http://elwood.su/2014/02/console-framework-on-mac/