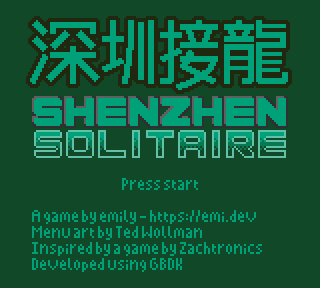 Shenzhen Solitaire GBC is a Gameboy Color version of the solitaire game contained in the video game Shenzhen I/O by Zachtronics.

Gameplay is designed to be nearly identical to the version included in Shenzhen I/O. However, due to the platform, there are notable differences: 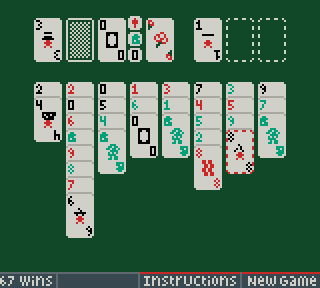 Other than these caveats, Shenzhen Solitaire GBC performs similarly to the original game. Cards will move across the screen if they can be placed in slots at the top right of the screen without consequence, wins are counted, and the art is recreated to the best of the Gameboy Color's ability.

Due to the nature of the system, there are some notable restrictions to what is possible in the game.

Shenzhen Solitaire GBC uses GBDK to compile C code to Gameboy ASM. If GBDK is installed in your C: root, you can run build.bat to generate shenzhen-solitaire.gbc. Otherwise, you can take the contents of the file and simply change the path of lcc. In order to use this file you will need a way to run Gameboy Color roms, this can be in the form of an emulator or a flash cart.

There are some conventions used to write this software that you should be aware of if trying to understand it.