This repository holds the source code, recorded VICON data, and the DARS 2016 paper. 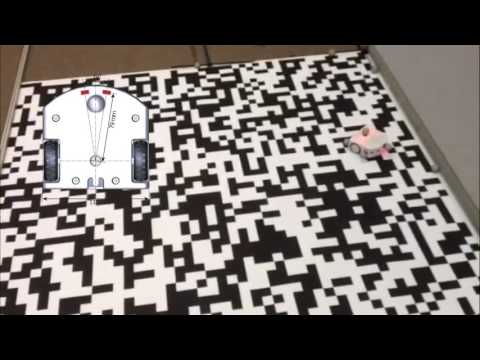 This can be performed both in simulation or with a physical robot.

You need the master branch of Aseba or, when released (sometimes in 2017), version 1.6 or later. You can download Aseba from github. Once Aseba is downloaded, compile it according to the instructions on github. Then, first launch playground, open one of the 6 scenarios in the simulation/ directory or pass it to the command line. For instance:

You should see a message indicating an incoming connection to the virtual Thymio, both on medulla and in the bottom part of playground's window. Keep asebamedulla running for next steps.

You need a Thymio, preferably a Wireless version, and the latest stable version of Aseba installed. As this real-time localization code uses DBus to communicate with Aseba, you need to have a D-Bus enabled build. It is the case by default on Linux, for OS X, you might have to recompile Aseba, on Windows, it is not supported. Assuming your are on Linux, first install the latest stable version of Aseba, as described on https://www.thymio.org/en:start.

You should see a message indicating an incoming connection to the Thymio. Keep asebamedulla running for next steps.

In simulation, this step is step required. If you have a real robot, the first thing to do is to calibrate the sensors of your Thymio. To do so, print and cut the calibration pattern from data/thymio-ground-localisation-maps.pdf, at size 1:1 (one gray line is 1.5 cm). Position the robot in front of the pattern, perpendicularly to the stripes: Then launch the calibrate_thymio.py in the code/ directory:

This program writes the calibration tables in the file config.json.

Make sure asebamedulla is running.

In simulation, launch the localization program, localize_thymio.py in the code/ directory, passing the filename of the image corresponding to the scenario loaded in playground and the --simulation flag, for instance:

With a real robot, print one of the six images from data/thymio-ground-localisation-maps.pdf, without scaling (1 pixel = 1 cm). Launch the localization program, localize_thymio.py in the code/ directory, passing the filename of the image corresponding to the printed one, for instance:

The program is running, but to localize, you need to have the Thymio move. To do so, plug a joypad and launch the asebajoy program:

It will connect to asebamedulla and allow to control the Thymio with the two first axes. For a typical modern gamepad, these axes correspond to the left analog stick. This has been tested with a Logitech Wireless Gamepad F710 (D-mode, Ubuntu 16.04.1), but should work with most joypads. Once the prerequisites are installed, you can play with existing datasets (in data/) using the test.py tool (in codde/), even if you do not own a robot. If you launch test.py with the -h argument, it will list its available options.

runs the synthetic data self tests using Markov localization and 32 discretization for angle.

The command used to generate the video for MCL being:

The rest of this section lists the different options.

ML can be selected by this switch:

A discretization for angles must be given as parameter.

MCL can be selected by this switch:

A number of particles must be given as parameter.

Two types of evaluations can be done with this tool, self test and data evaluation.

Self test can be selected by this switch:

This will test the algorithm on noiseless synthetic data. If a set of parameters do not work with this mode, it is useless to try with real data.

Data evaluation can be selected by this switch:

A directory from which to evaluate data must be given.

Getting information out of the tests

In addition to observing the colors in the console, there are two ways to observe the performance of the test.

A log of the test can be requested with --performance_log, the argument being the file for logging. In that file, each line will have similar informations for every step.

In addition, images can be dumped with the --debug_dump option, taking a directory (hopefully empty) as parameter. The exact information depend on the algorithm, bitmaps are dumped for ML and maps of arrows for MCL.

There are different parameters. The main being the arguments to --ml_angle_count and --mcl_particles_count. In addition, there are these categories:

Controlling which part of the dataset we use

Two additional options allows to control which part of the dataset on want to use.

With --skip_steps, only one line every N steps will be used from the dataset. Therefore, we can simulate longer time steps. For instance --skip_steps 10 will simulate observations only every 1 second.

With --skip_at_start, a certain number of steps can be skipped in the beginning of the file, because in some the robot is initially idle. If combined with the previous parameter, its effect will be multiplicative.

With --duration, only a certain number of steps will be used. If combined with the previous parameter, its effect will be multiplicative.

With --custom_map, a custom map can be used. By default map.png in the data directory will be used.

To use grayscale maps that were not available at record time, the switch --fake_observations allows to regenerate observations from map and ground truth.