Everything you need to propagate tiny trump!

Welcome to tiny trump's github page! If you're unsure what to do, just find the green button that says "Clone or download" and choose "Download Zip." Feel free to use these assets in any way you like. 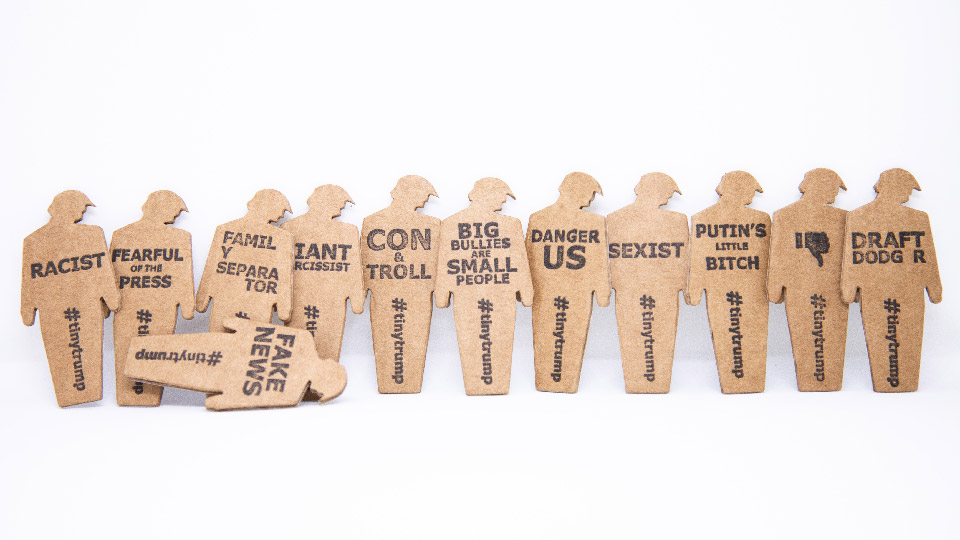 While the majority of Americans disapprove of the authoritarian and divisive tone emanating from the White House most people feel powerless to stop it and, as a result, remain largely inactive. This project’s primary goal is to transform this wide-ranging demographic into activists, one tiny act of resistance at a time, and in so doing, help participants regain a sense of power and control over a situation in which they feel as though they have neither.

tiny trump is a crowdsourced art installation by Eric Corriel that harness the energy and will of the public to inject resistance totems into the NYC landscape and beyond.

In this repository you will find tiny trump figures looking up and looking down.

Looking up
As a rule of thumb I use the looking up variant for the large (2 feet tall) protest signs or for any situation where the sign is to be viewed from afar. This version encourages viewers to look down at the figure, which is an empowering a gesture.

Looking down
I find the looking down variety is better for the 3" tall figures since they can be placed anywhere and are often placed at eye-level. Since the context for the smaller variant is wide open and one can't be sure how the viewer will encounter it, the looking down version imbues the object itself with a sense of being looked down upon.

That said, feel free to use them any way you like.

Donald Trump projects himself as larger than life. This is a cover. In reality he is insecure and mentally fragile.

When I hear, “in a short period of time I understood everything there was to know about health care,” and “I know the details of taxes better than anybody,” I do not see a “genius.” I see someone who is insecure about his intelligence and desperate to provide cover for what he doesn’t know.

When I see the president of the United States throwing paper towels at survivors of a natural disaster as though he were playing arcade basketball, I don’t see someone who is trying to lighten the mood. I see a person who either can’t or doesn’t want to be seen empathizing with minorities.

When I see him condemn “both sides,” pardon Sheriff Joe Arpaio, and retweet the most offensive anti-Muslim videos without context, I see a morally weak leader unwilling to condemn bigotry, hatred, and racism.

When I see the record rate at which he lies and the contempt he has for journalistic institutions I see someone who simply isn’t mentally strong enough to engage with the truth.

When I see him engage in tit-for-tat reprisals with Rosie O’Donnell, Mika Brzezinski, Megyn Kelly, and boast about “grabbing [women] by the pussy,” I see a misogynist.

And when he insults a Muslim gold star family, calls Mexicans “drug dealers, criminals, rapists”, and refers to black majority countries as “shitholes,” I see a xenophobe and a racist.

In short, I do not see a big man when I look at donald trump. Quite the opposite. I see a small-minded and petty man. I see tiny trump. And I am not alone.

tiny trump gives those who see trump as small a means to exert ourselves in a publicly visible and meaningful way.

Everything you need to propagate tiny trump!