It's time to bring nostalgia back by converting your NES gamepad into a compilant USB HID game device.

This project contains a firmware based on one of Darran's Hunt examples on emulating USB devices using LUFA and an sketch file to read the input from a NES gamepad.

Turn your NES gamepad into an USB game device 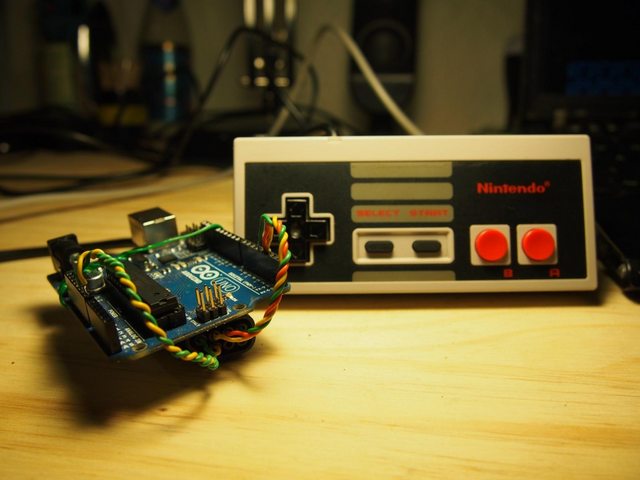 Step 1: Connect your NES gamepad to the Arduino

To test that everything works wonderfully, upload the nintendo-test sketch on the Arduino. You should see the state of the buttons being outputted on the serial interface. If everything seems fine, proceed to the next step.

Before flashing your board with a new firmware, you must upload the sketch first. The Gamepad.hex firmware does not allow uploading sketches onto memory.

If you need to upload a new sketch after flashing the firmware, you'll have to re-flash again the board with the default Arduino firmware.

Instead of using an specific purpose USB-to-serial chip, the Arduino comes with an ATmega programmed to act as an USB to serial device (so you can upload compiled bytecode from sketches into the EEPROM). That's what gets detected when you connect the Arduino into the computer. In better words:

The Uno differs from all preceding boards in that it does not use the FTDI USB-to-serial driver chip. Instead, it features theAtmega16U2 (Atmega8U2 up to version R2) programmed as a USB-to-serial converter.

If you want the Arduino to appear as a different device, you need to flash a new firmware onto it, by putting it into DFU (direct firmware upgrade) mode which, depending on your board, is done with more or less messy ways which for older versions may require soldering.

Hopefully my board is an R3, which can be cleanly put into DFU mode by jumping the RESET and GND pins of the Atmega16U2 together for a fraction, using a jumper or, if feeling wild, just a piece of copper.

Now an lsusb will show you "03eb:2fef Atmel Corp". Now, using the dfu-programmer you can interface with the atmega chip and flash firmware upgrades.

For instance, just to know everything is going as it should you can test it safely by

Reconnect the arduino, and notice that it is recognized as a USB HID device. Time to test the input using your system settings, outputting /dev/input/js0 or directly playing some games!

Follow [this] darran_build post on Darran's blog about setting up the environment to compile LUFA based firmwares. Note that you will need LUFA-100807 in order to properly build firmwares for the Arduino. This is what I did in arch:

If everything compiles cleanly, a Gamepad.hex file will be generated on the same folder.