Landing page for the Ukrainian translation of Good and Evil.

dobroizlo.com.ua is the official web site for the Ukrainian translation of Good and Evil. 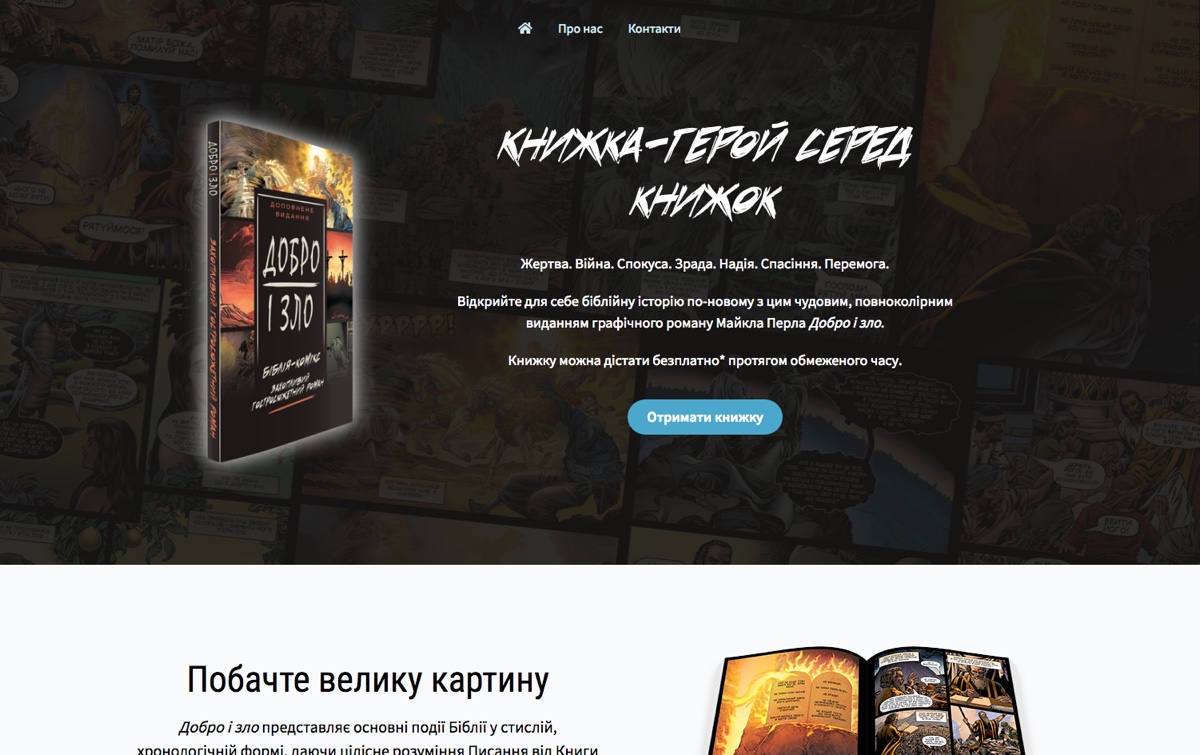 This site is a universal Vue.js application built with Nuxt.js, and is deployed as a pre-generated static site on Amazon S3. In addition to Vue and Nuxt, several noteworthy supporting technologies have been used, including the following:

To get started, clone/fork the repo, cd into it, and install the dependencies.

Nuxt uses Webpack as its build tool, and is also pre-configured for hot module replacement. To begin, start the development server on localhost:3000:

In addition to deploying server-rendered apps, Nuxt also works great as a static site generator. That's how we're using it here. To pre-render the entire site as static HTML, CSS, and JavaScript files, run this command:

The generated site will be output to the dist/ folder.

Sometimes in development it can be helpful to run the statically generated site with a local web server, simulating a production environment. I have found http-server to be a great choice. Here's how I build and serve the static site on my local machine.

First, install http-server globally if you don't already have it.

Next, build the site as explained in the previous section.

Finally, move into the dist/ folder and start the server.

Visit http://localhost:8080 and check out the site!

Nuxt allows you to define environment variables which can be accessed at compile time by calling process.env.YOUR_VARIABLE. This is particularly useful for generating builds with specifics that differ between, for example, production and staging environments.

To generate a production build, run:

This will, among other things, set the robots meta tag to index,follow. If APP_ENV is set to anything else, the robots tag will be set to noindex,nofollow.

Our preferred deployment solution for static sites is Amazon S3. It's super cheap, and provides lots of nice extras like a CDN with CloudFront and a free SSL certificate.

Individual deploys are handled with the bin/deploy script, which basically wraps the AWS CLI, using the aws s3 sync command to copy files up to the appropriate bucket. The bin/deploy script expects the environment to be passed as an argument.

This site was developed in tandem with bibliya.net.ua and these two projects were my first using Vue.js and Nuxt.js. In learning these technologies, I consulted a variety of blog posts, online tutorials, and video courses — some paid, others free. By the far the most thorough and effective for me were two courses on Udemy by Maximilian Schwarzmüller:

If you want to learn Vue/Nuxt, I highly recommend these courses. Max is a great instructor, very thorough and engaging. His lessons are informative and a real pleasure to listen to. Thank you Max!

Good and Evil was written by Michael Pearl. Copyright © 2008, 2018 Michael and Debi Pearl.

Landing page for the Ukrainian translation of Good and Evil.