SimpleDiscussion is a Rails forum gem extracting the forum from GoRails. It includes categories, simple moderation, the ability to mark threads as solved, and more.

Out of the box, SimpleDiscussion comes with styling for Boostrap v4 but you're free to customize the UI as much as you like by installing the views and tweaking the HTML. 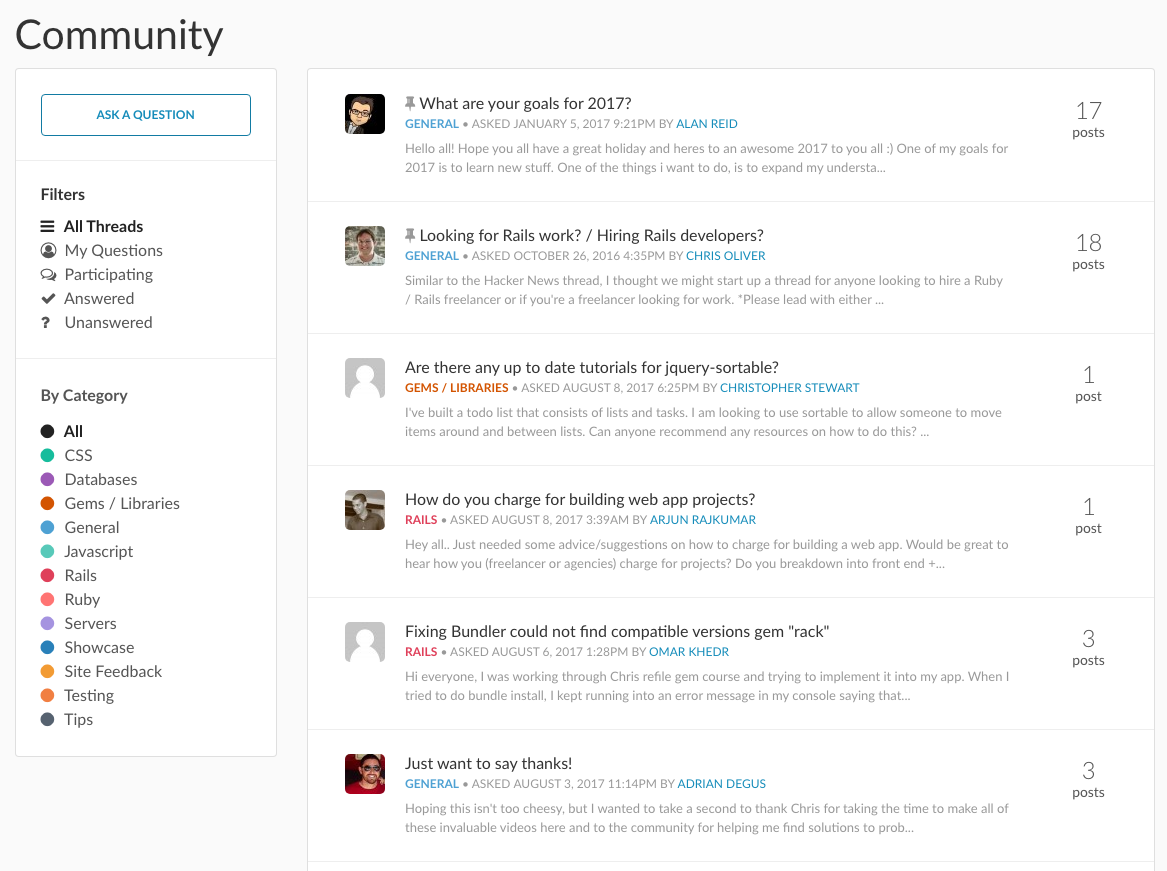 Before you get started, SimpleDiscussion requires a User model in your application (for now).

Install the migrations and migrate:

Add SimpleDiscussion to your User model. The model must have name method which will be used to display the user's name on the forum. Currently only a model named User will work, but this will be fixed shortly.

Optionally, you can add a moderator flag to the User model to allow users to edit threads and posts they didn't write.

Add the following line to your config/routes.rb file:

Lastly, add the CSS to your application.css to load some default styles.

To get all the basic functionality, the only thing you need to do is add a link to SimpleDiscussion in your navbar.

This will take the user to the views inside the Rails engine and that's all you have to do!

Customizing All The Things!

If you'd like to customize the views that SimpleDiscussion uses, you can install the views to your Rails app:

You can also install a copy of the SimpleDiscussion controllers for advanced customization:

Helpers are available for override as well. They are used for rendering the user avatars, text formatting, and more.

NOTE: Keep in mind that the more customization you do, the tougher gem upgrades will be in the future.

By default, SimpleDiscussion will attempt to send email and slack notifications for users subscribed to threads. To turn these off you can do the following in config/initializers/simple_discussion.rb

After checking out the repo, run bin/setup to install dependencies. Then, run rake test to run the tests. You can also run bin/console for an interactive prompt that will allow you to experiment.

Bug reports and pull requests are welcome on GitHub at https://github.com/excid3/simple_discussion. This project is intended to be a safe, welcoming space for collaboration, and contributors are expected to adhere to the Contributor Covenant code of conduct.

Everyone interacting in the SimpleDiscussion project’s codebases, issue trackers, chat rooms and mailing lists is expected to follow the code of conduct.