This page has some hints about debugging the engine.

Running a Flutter app with a local engine

Once the appropriate version of the engine is built (see Compiling the engine), run your Flutter app with:

It is important to always have a host_XXXX version of the engine built when using a local engine since Flutter uses the host build's version of Dart.

If the engine roll is failing (see Autorollers), you can use git bisect on the engine repo to track down the offending commit, using the --local-engine command as described above to run the failing framework test with each version of the engine.

All OpenGL calls in Skia are guarded by either the GR_GL_CALL_NOERRCHECK or GR_GL_CALL_RET_NOERRCHECK macros. Trace events may be added in these macros to trace all GL calls made by Skia, for example in a patch like this.

Also, make sure to run your application with the --trace-skia flag.

Building with flutter --local-engine will set a LOCAL_ENGINE Xcode build setting in your Flutter application Generated.xcconfig file. This will be set until you run flutter run again with either a different --local-engine option, or with none at all (which will unset it).

You can speed up your workflow by adding the --config-only flag to set up the Xcode build settings and plugins, but not compile the app. For example: 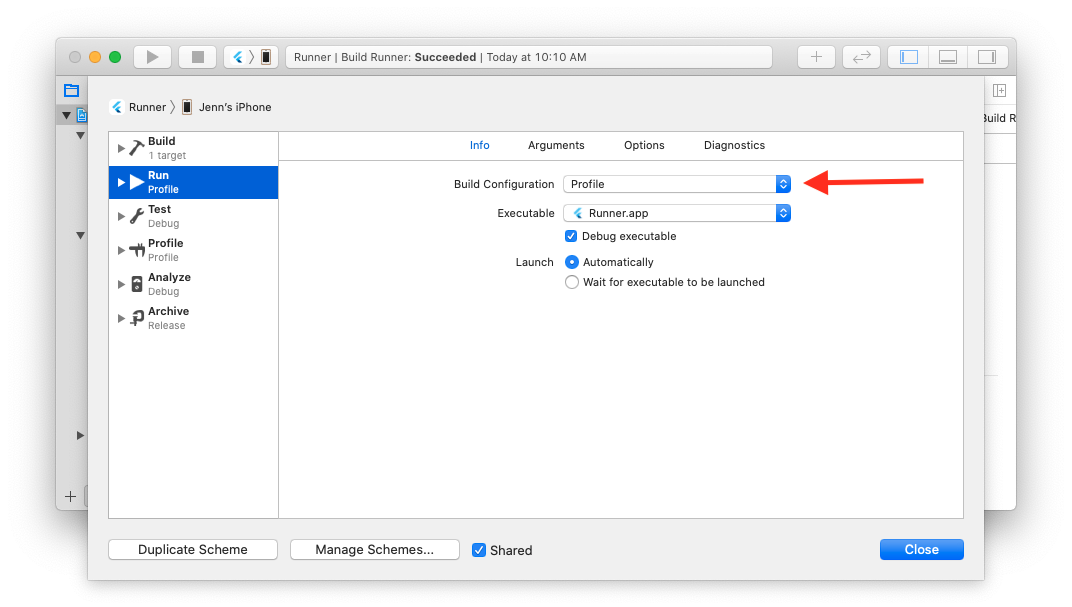 Add an engine symbol breakpoint via Debug > Breakpoints > Create Symbolic Breakpoint.... The Symbol field should be the engine symbol you're interested in, like -[FlutterEngine runWithEntrypoint:] (note the -[ prefix has no space).

You can also set a breakpoint directly with lldb by expanding Flutter > Runner > Supporting Files > main.m in the Runner Project Navigator. Put a breakpoint in main() and start the application by clicking the Run button (CMD + R). Then, set your desired breakpoint in the engine in lldb via breakpoint set -....

Next, build and run a flutter app using flutter run --local-engine. It may be helpful to configure the Android app to wait for the local debugger on start.

Then hit the "Attach debugger" button in Android Studio, click "Show all processes" in the pop up, and select your app from the list and hit OK.

Logging in the engine

Flutter tool will by default parse out any non-error output from the engine. Error logs will be displayed. Logging is handled though the FML library's logging.h