Penelopean robots are modular, reconfigurable, dis-assemblable and soft. They are part of the Penelope Project, a Study of Weaving as a Technical Mode of Existence. 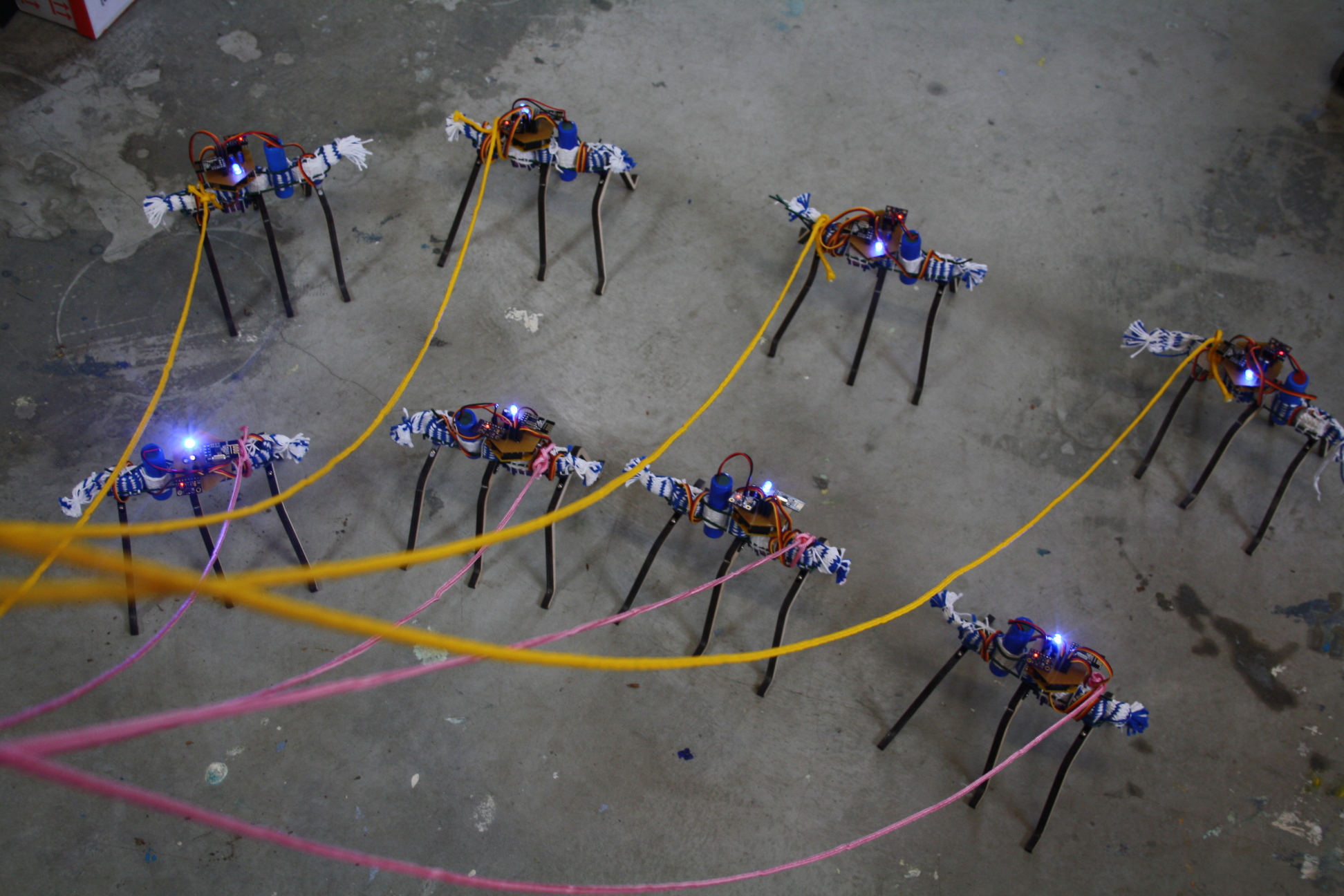 Penelopean robot swarms are designed for weaving ancient Greek looms and maypole dancing. They can be livecoded remotely by a Raspberry Pi and can be synced to musical beats for performances. Here is an example of two maypole dances to create weaves we are currently working on: 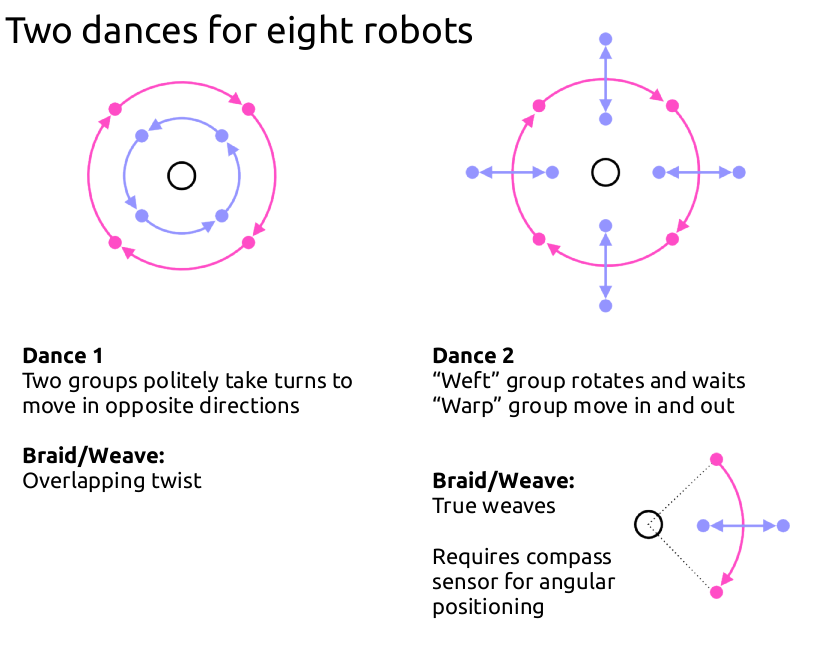 All source code and hardware files are here, each robot is made from:

Each robot is constructed using tablet weaving, an ancient human technology dating back to neolithic times (and one of the few forms of weaving that has never been mechanised). 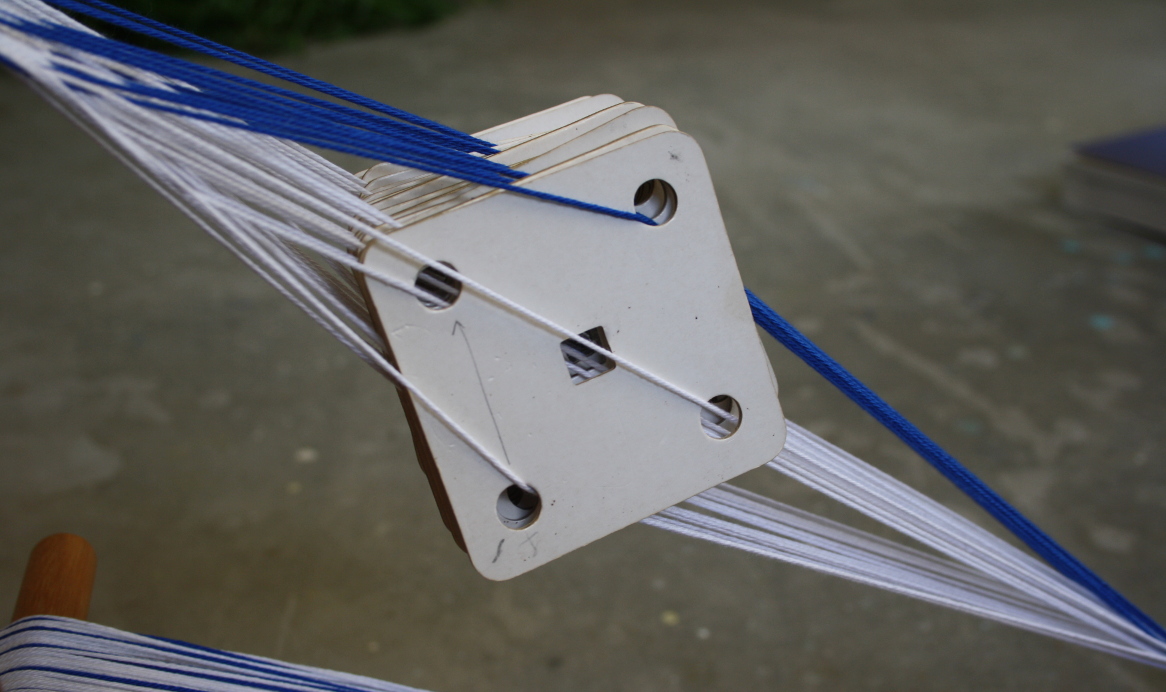 Tablet looms are simple to set up, and consist of a stack of cards with holes punched in the corners through which the warp yarn passes. See here for a description of how to set up tablet loom.

Usually tablet weaving produces a strong braid. For the penelopean robotics we use a technique known as Icelandic double weave, where we weave with the cards rotated at 45 degrees and use two wefts at the same time. This converts the usually flat "2D" weave into a "3D" structure, which we can use to support all the components for the robot.

The exact spacing required will depend on the kind of yarn you are using (I recommend 100% cotton or other plant based yarns - as wool is too fluffy) but using this yarn I measured out 10 wefts to hold an SG92R microservo and 8 for the 18mm diameter cylindrical battery.

Here is an attempt at notating the steps required in full. We start with a supporting weave using normal single weft weaving, and then start splitting to to hold the 3 servos and a battery, finishing with an final supporting weave [todo: later version included a spacer to make the legs equidistant]

As the structure is woven into the fabric it is strong and able to cope with the forces involved. The final stage is to stitch the components into the structure to hold them in place along with some thick wire to give the legs something to push against. 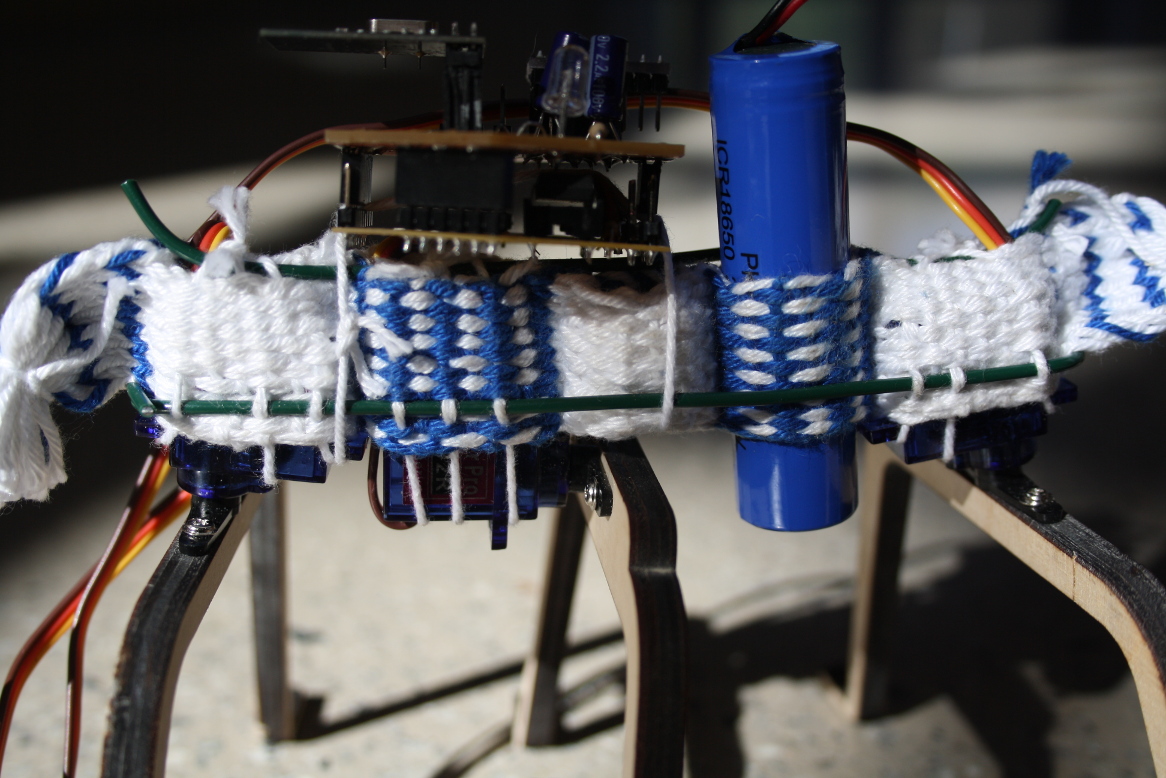 The swarm of robots is controlled by a Raspberry Pi running a python program which is in charge of distributing commands to the robots.

The robot servos are controlled via a "movement pattern sequencer" which interprets symbols representing angles of rotation. This is designed to allow different kinds of movement to be experimented with as well as synchronisation with music, across the swarm.

By default a pattern consists of a 12 byte array, where each servo is controlled by 4 symbols that are looped. 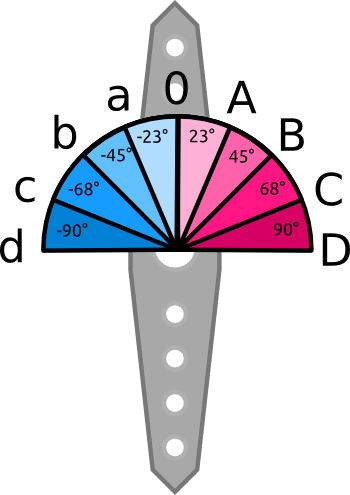 Various predefined patterns can be selected via bytecode programs (see NEXT_PATTERN below) which correspond to:

One of the problems with having numerous robots is updating and distributing code changes to them. In order to make this process more versatile we use a livecoding system where bytecode can be sent over radio and written directly to memory. This bytecode is interpreted by a machine running on the robot which can be halted and reset over radio (separately to the main process, running the radio, controlling servos and reading sensors etc, which continues as normal).

The robot bytecode (called yarn) has access to a set of registers that describe the current state of the robot, including the movement sequencer and sensor information. Registers can also be written to that change the current servo motion pattern or light the LED for example.

Writing the bytecode directly is considered a temporary inconvenience before a compiler for a decent high level language is designed.

Yarn bytecode is a 16 bit stack based microcode language.