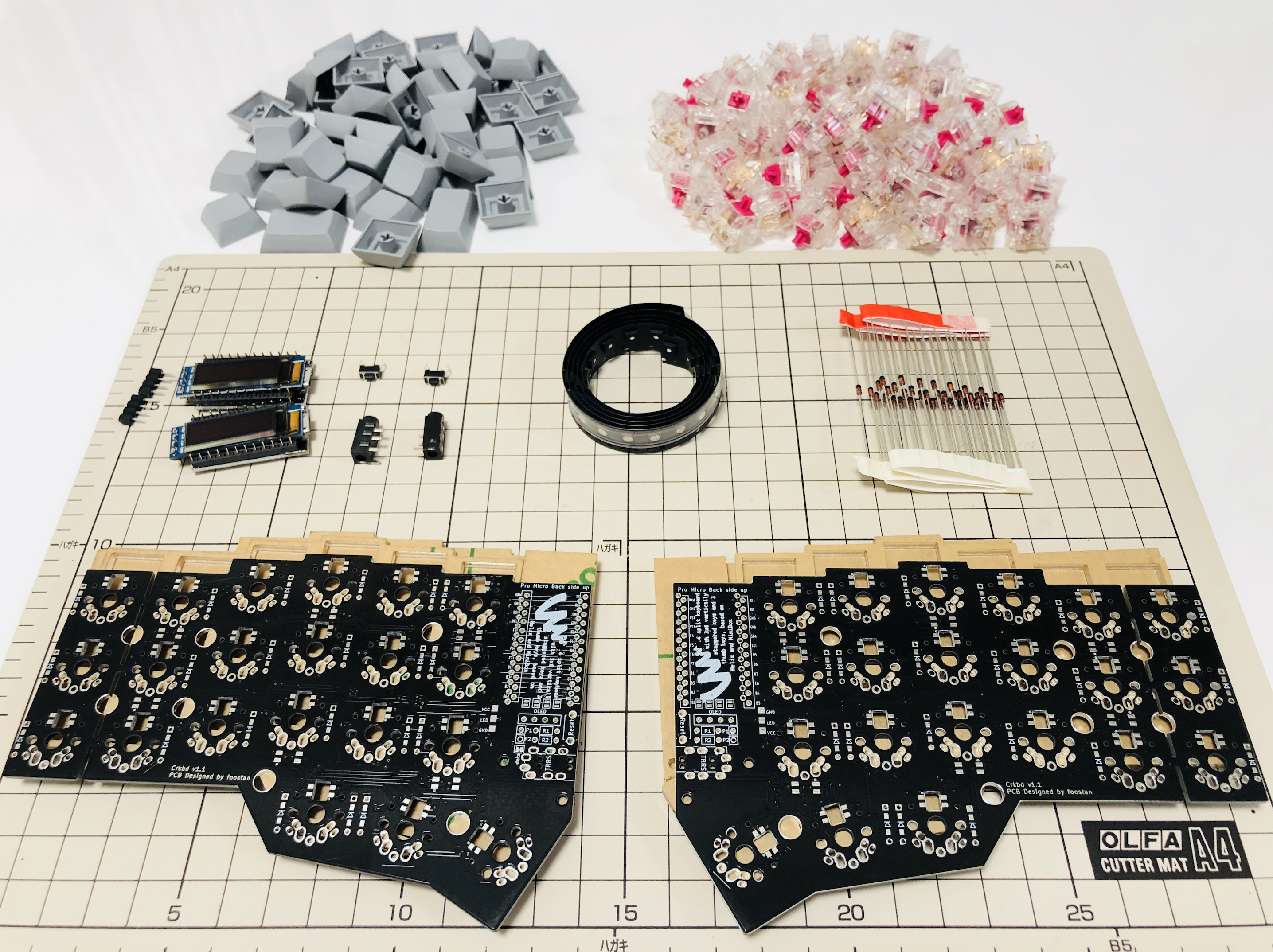 PCB is reversible; use one for the left hand side and the other for the right.

Solder diodes as indicated in the picture. You can place it on either side, but front side is recommended if you implement under-glow LED. You can use SMD diodes too. 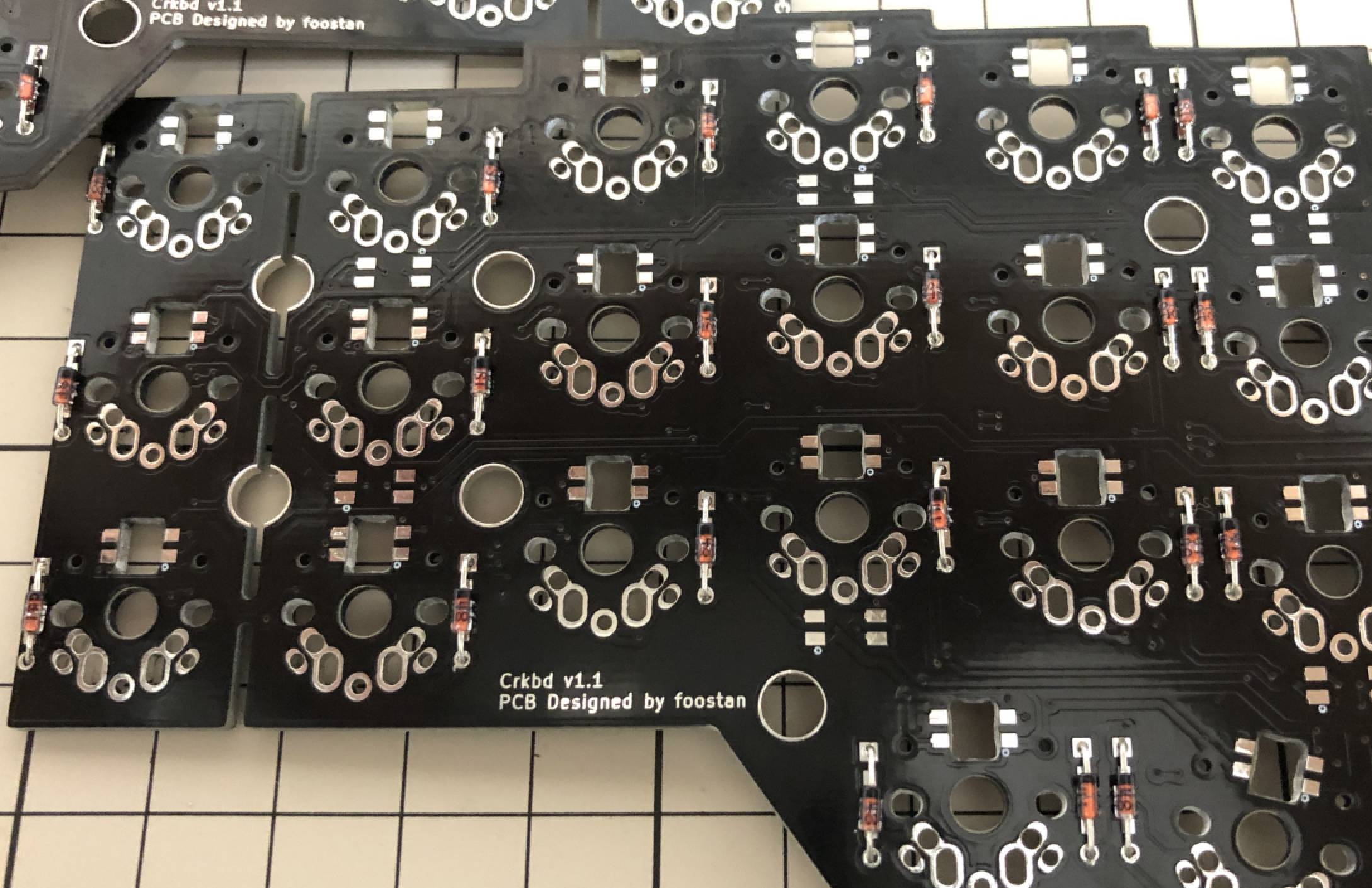 Diode has polarity; make sure to match the polarity with PCB silkscreen. 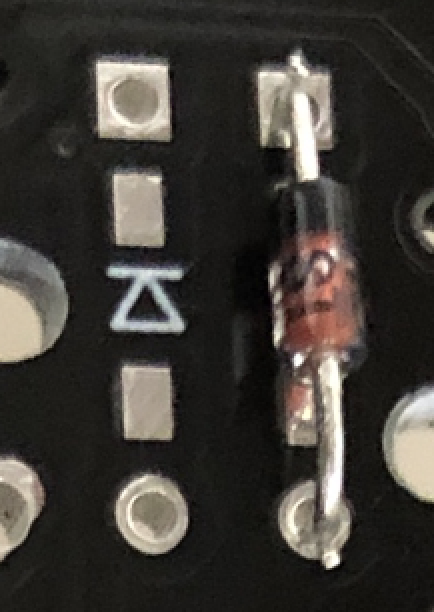 If you use low profile keyswitches, you have to implement SMD diodes on the back side. Otherwise, diodes will interfere with top plate.

As with normal diodes, SMD diodes have polarity. The lines on the SMD diode should be on the same side as the line on the PCB silkscreen.

Implement LEDs under keyswitches (No. 7 through 27) upward facing, and others (No. 1 through 6) on the back side(under-glow), as indicated in the picture. 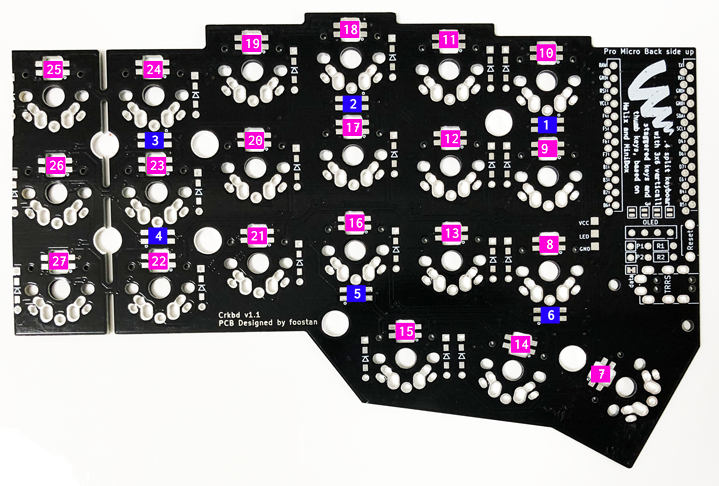 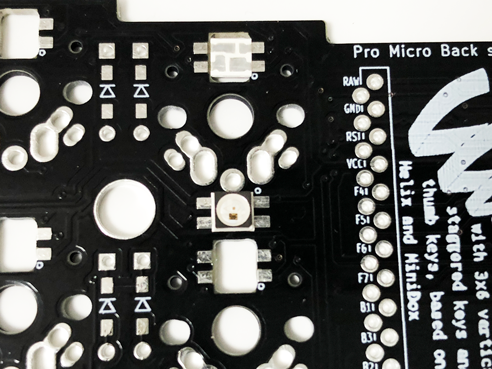 The LED has one pad that is shaped like a square. That square should connect to the pad that has the 'o' silkscreen marking: 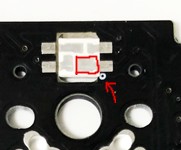 There are many different techniques on how to solder the LEDs, but this video might give you an idea on how to do it.

For No. 1 to 6 LEDs, solder the pattern on the side of the device (highlighted in pink on the picture) and the PCB pattern(blue on the picture). Apply flux and take small amount of solder with a soldering iron and press it on the edge of the patterns. 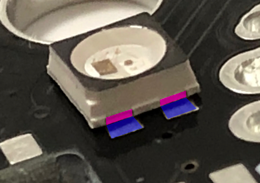 LEDs are connected in the order of the number on the picture above. If it turns on only halfway, it is likely that first LED that doesn't turn on or the last LED that turns on is not implemented correctly.

Note that the default Crkbd firmware has LEDs turned off, so you'll have to turn them on before you can test (see the firmware section for instructions how). 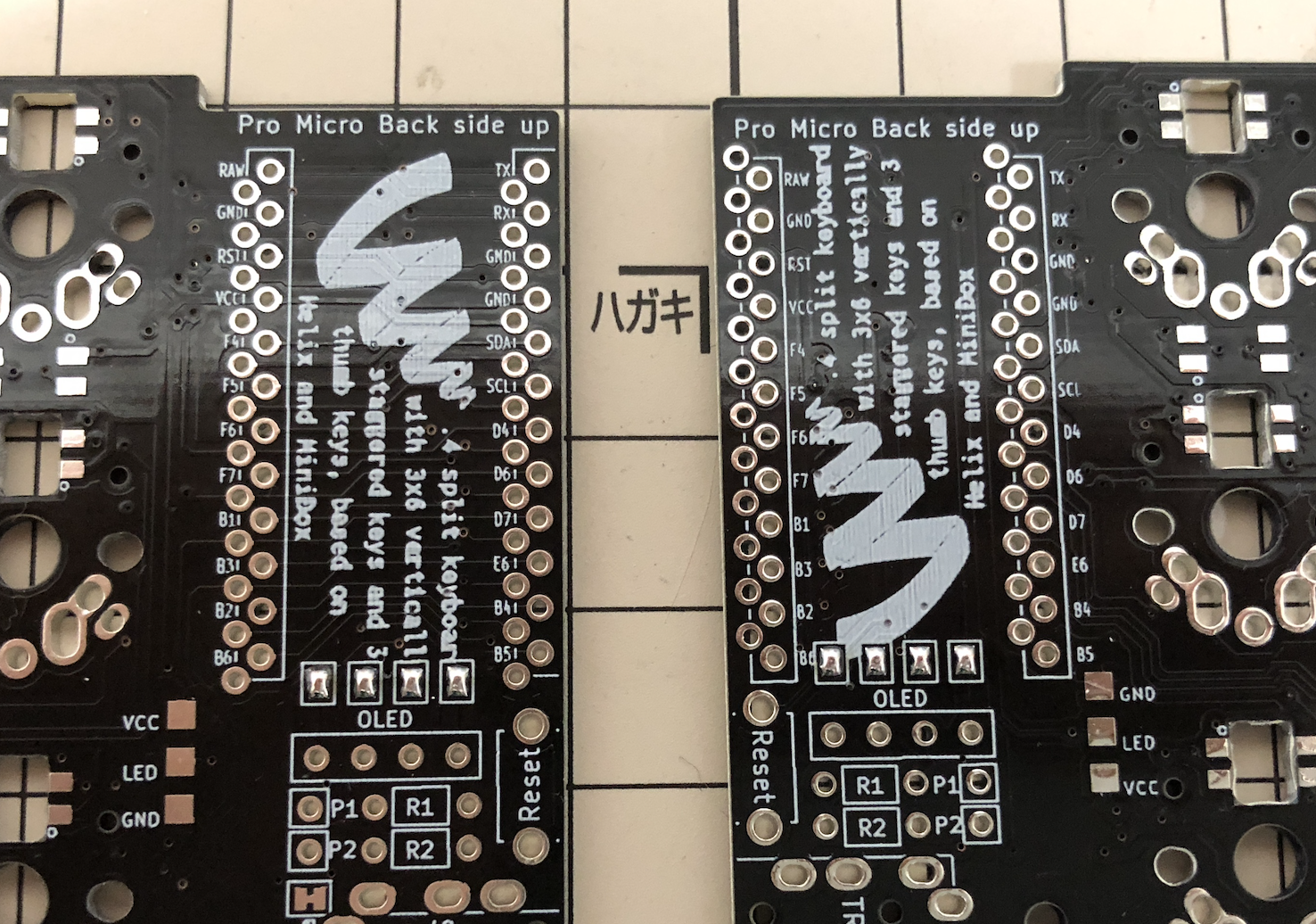 Install TRRS sockets and reset switches as in the picture. For OLEDs, also implement pin sockets.

Before you start, flash the Crkbd firmware to the ProMicros to make sure they are alright. 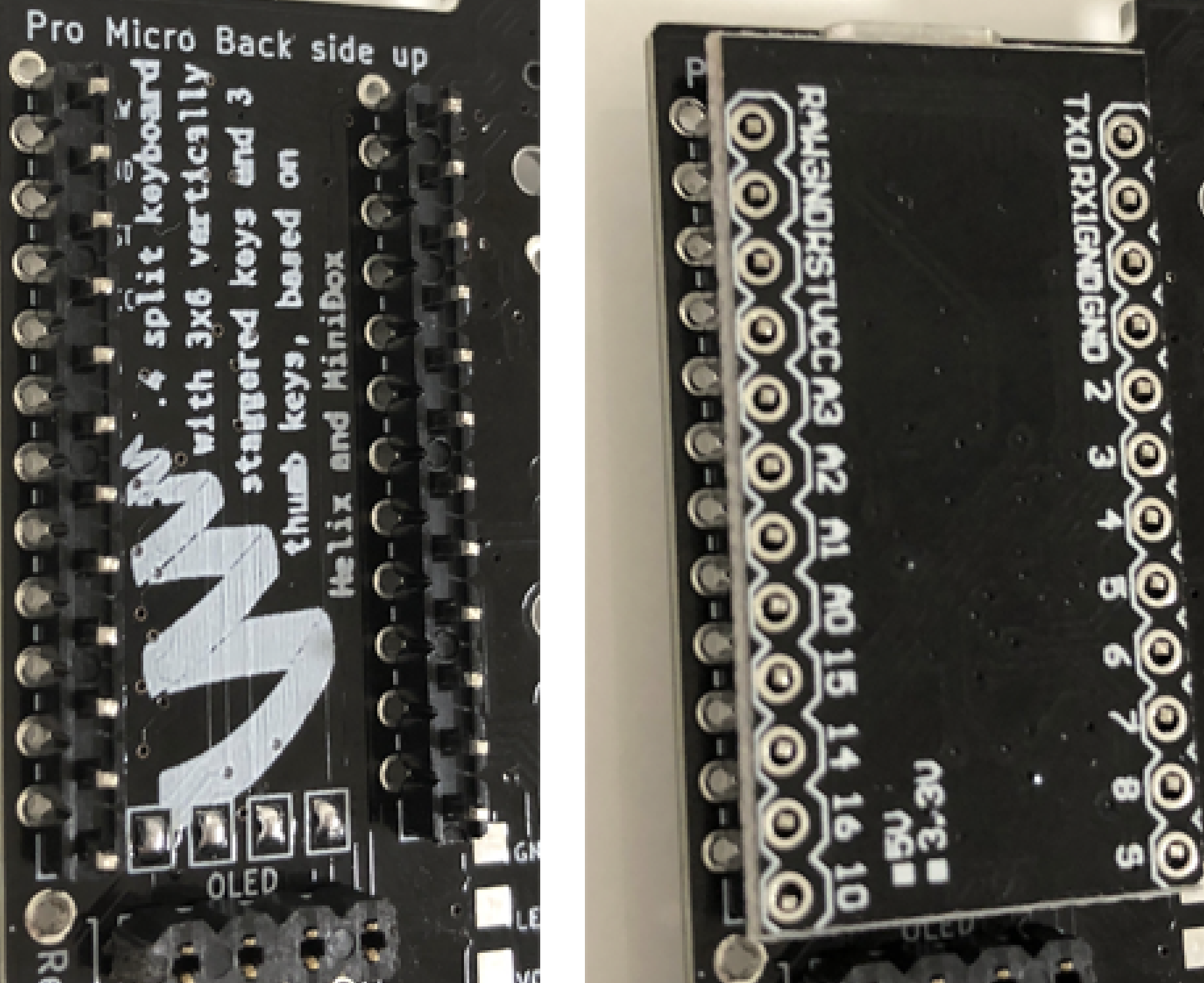 The picture is the right hand side, but it's the same for the left hand side - pins into the through holes in the white frame as seen from the frontside, placing the ProMicro with its backside up.

Implement pin header onto the OLED modules, then insert them into the pin sockets.

Use socket to Mount ProMicro

With using sockets for mounting ProMicro, you can replace it easily when it breaks. Two methods are introduced here.

ProMicro kit with spring loaded headers is available at Yusha-Kobo

Using OLEDs available at Yusha-Kobo which come with low profile header, together with and 8mm spacers, you can build them think and gap-less.

Install a couple of 12x1 pin sockets on a breadboard. 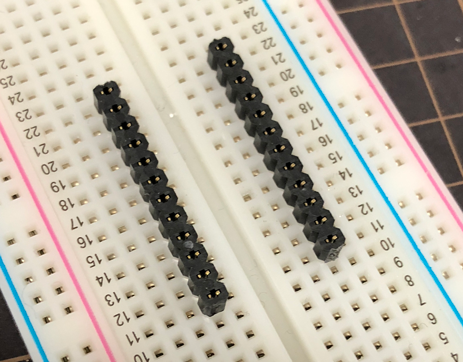 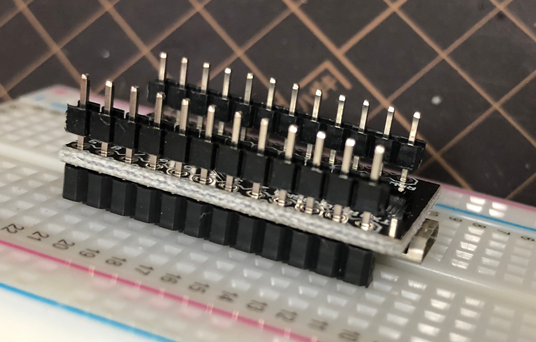 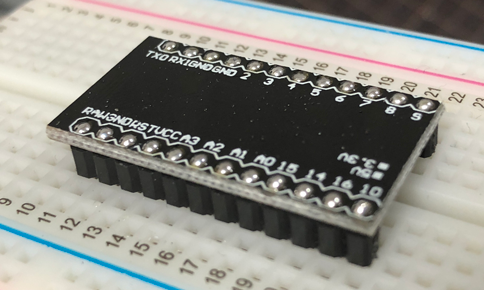 Comparing pin-headers in the picture. Headers come with OLED available at Yusha-Kobo are lower.

It is recommended to test the ProMicro and OLED modules before installing keyswitches because rework would be difficult after that.

First, build QMK Firmware for built for Crkbd and install on ProMicro (if you haven't already done so). 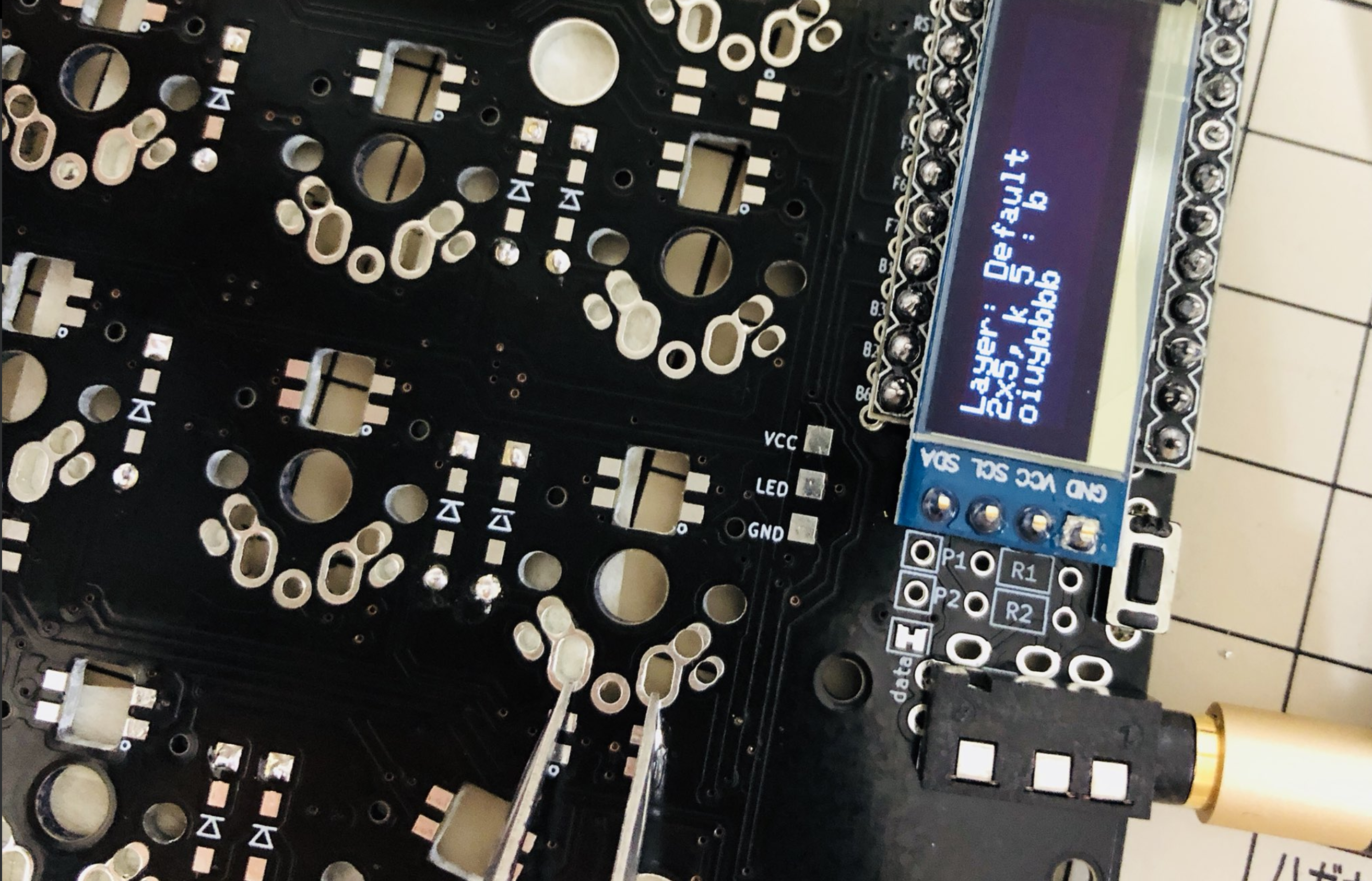 Using the default keymap, OLED will show information on the keyswitches being pressed. Check the connections by short-circuiting keyswitch soldering pads with tweezers or a bit of soldering wire. Check all of them.

If you have OLED displays, you can verify that all keys are responding by looking at the log information showed there. It will say which row and column was pressed, e.g. 1x5 or 0x2. Using the tweezers or wire, connect each buttons soldering pads and make sure the display changes. If something isn't working, take note of the which row x column it is that isn't working, as it can help when troubleshooting.

If you have mounted LEDs, also make sure all of them are turned on. As note before, the default firmware has LEDs turned off, so you have to turn them on in the firmware before you test. 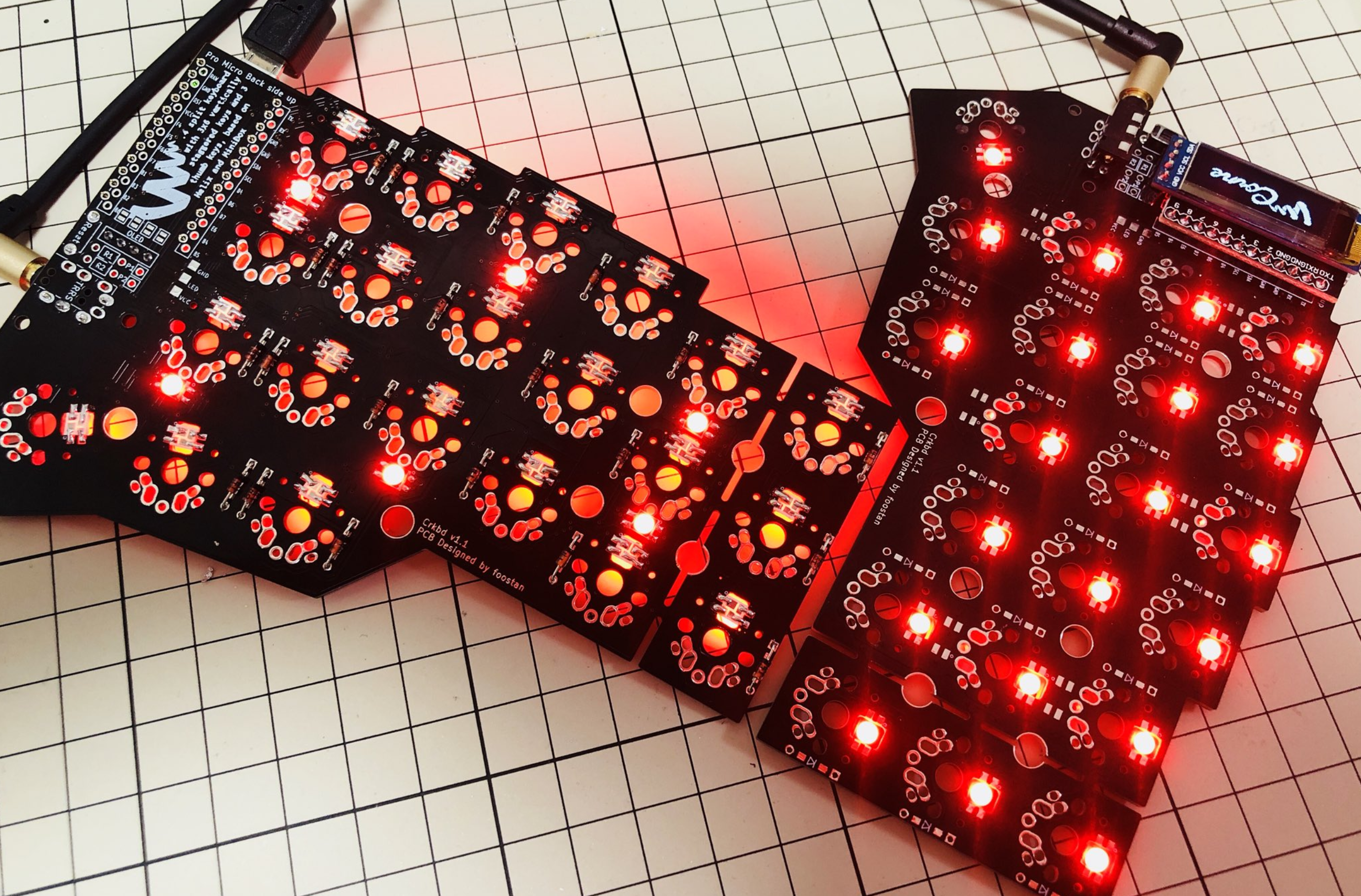 Sandwich top-plate with PCB and key-switches. 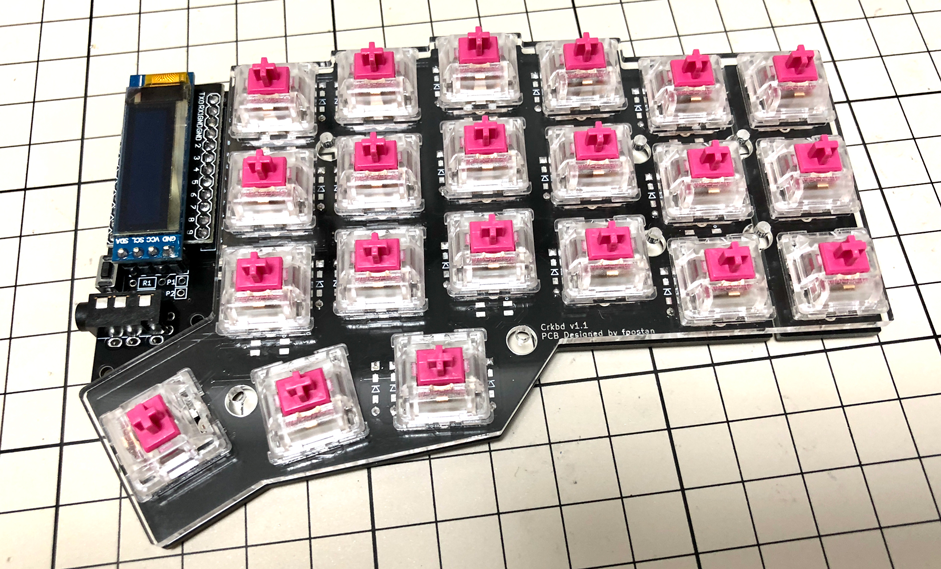 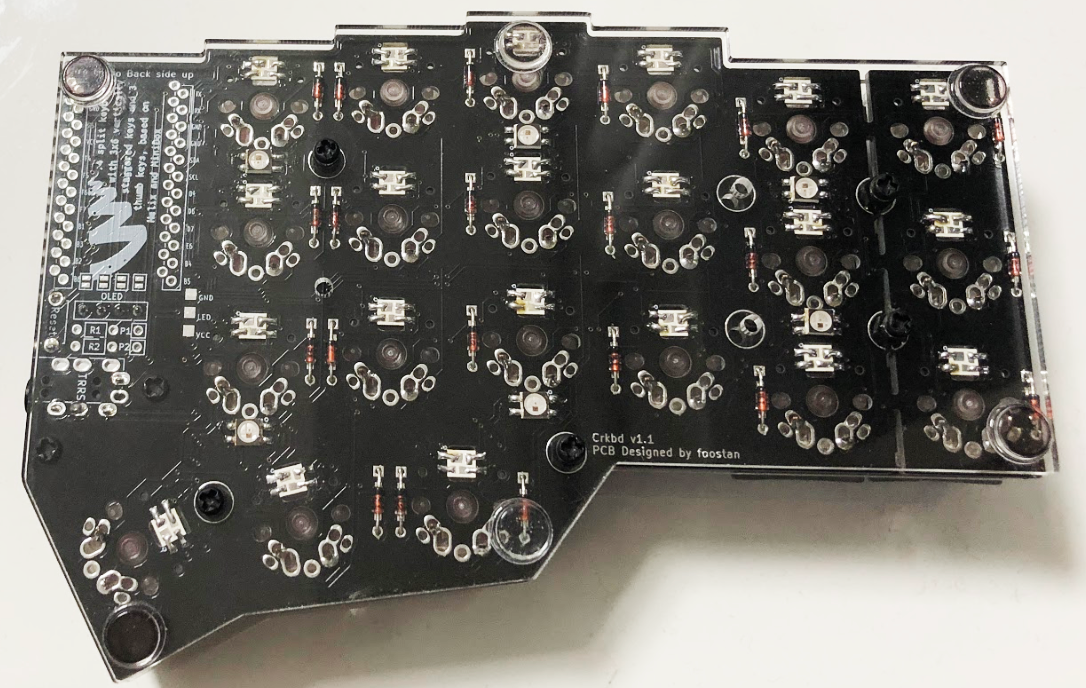 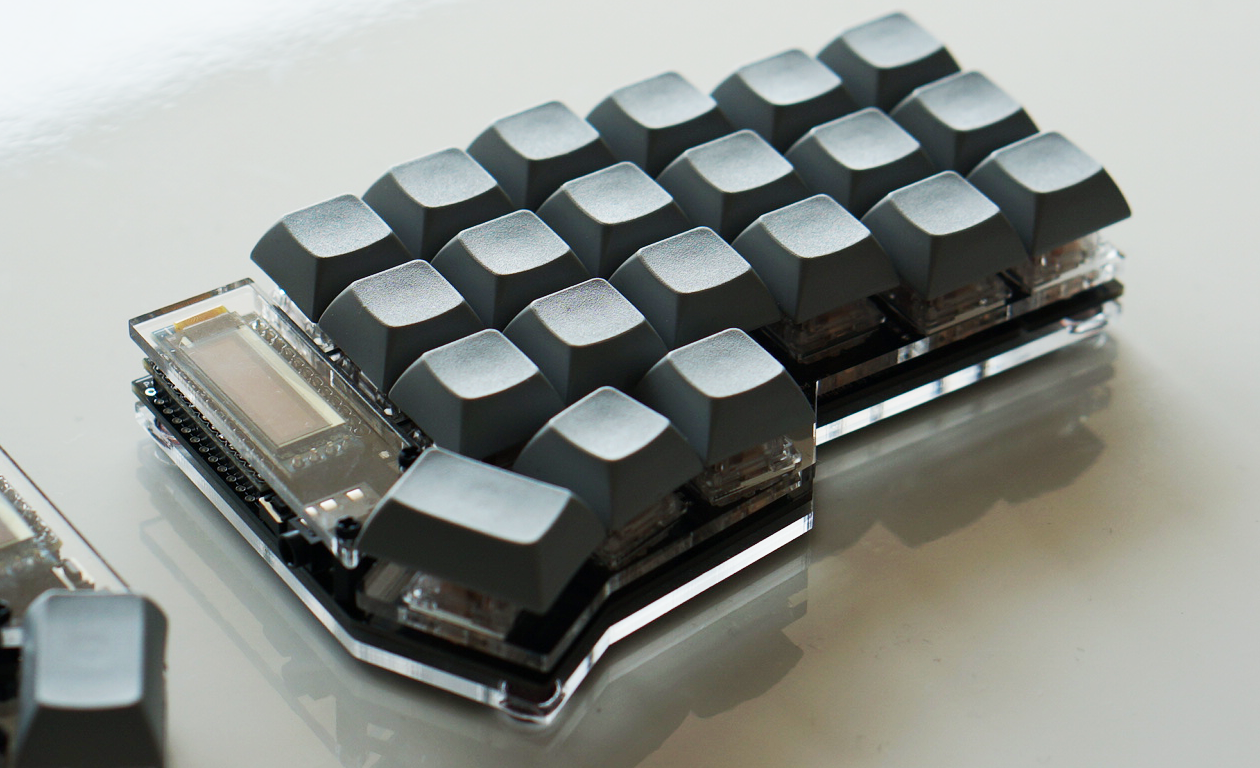 Then build firmware for Crkbd with this command:

To flash the firmware image you have just built, execute this:

You will see . after a message like below. While you see . is being printed on the screen, push the reset switch twice.

Flash the firmware to the other side as well.

To turn the LEDs on, you have to edit the rules.mk file. If you use the default layout, it can be found here keyboards/crkbd/keymaps/default/rules.mk. Add the following line to the top of the file:

Compile and flash to both sides and all LEDs should turn on and glow red if you have soldered everything correctly. If you run the default firmware and the LEDs turn a differrent color, the data to the LEDs is probably corrupted somewhere along the way. Check the LED before the first one turning a different color using the troubleshooting guide below.