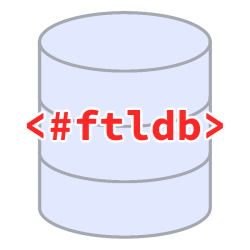 An integration of the FreeMarker template engine into Oracle Database for easier server-side code generation.

Allows you to create, store and execute templates written in FTL inside a database. You can generate any kind of SQL/DML/DDL statements or stored program units using metadata retrieved from queries and calls. Instead of composing complex string expressions full of quotes and concatenation operators (as you may currently do) just write and compile plain SQL or PL/SQL code flavored with FTL macros in you favorite IDE with the support of its content/code assist features.

Not an Oracle user? No problem. FTLDB also suits for client-side code generation for PostgreSQL, MySQL, DB2 or any other RDBMS providing a JDBC driver.

While developing a database application you may encounter the need of code generation, a technique of composing code programmatically rather than manually using different sources of metadata.

This need may be caused by working with a priori unknown conditions or environment, e.g. when you construct an SQL query based on user filters and grouping columns selection, or when you adapt your application for working on databases of different vendors, versions and editions. Another reason is following the DRY principle, e.g. when you work with a finite set of similar data structures, to which a common processing algorithm is applied, and you are able to implement one template and generate many slightly different procedures from it.

The code generation problem may be solved in two ways:

FreeMarker is a Java-based template engine that allows to solve the code generation problem in the second way with a simple template language called FTL.

Notice: FreeMarker is not the only possible option. We have also tried its closest competitor Velocity and succeeded, but the project seems frozen and its language is not as convenient as FTL.

FTLDB is an enhancement of FreeMarker for working with databases via JDBC. It provides FTL methods for retrieving data from a database with queries and calls. It also provides extra PL/SQL functionality for working in Oracle Database.

FTLDB may work either as a database application or as an external utility. We call it server-side and client-side mode correspondingly.

In the server-side mode templates are stored inside a database in program unit bodies as plain text. FTLDB runs on the embedded JVM, reads templates and complementary data from the database, processes the templates and returns the result as an object, which can be saved to a table or run immediately as a script. Thus, you need only a database, but necessarily with Java support.

In the client-side mode templates are stored in files on a client, e.g. developer's computer. FTLDB runs on the local JVM, reads templates, connects to a database, reads complementary data from it, processes the templates and saves the result into an output file, which can be run later with a database utility such as SQL*Plus. Thus, you need not only a database but also a JRE, a JDBC driver and a database utility installed on the client.

The server-side mode looks more integral, since it allows to store templates, metadata and the resulting objects together and doesn't require extra machine and software.

However, the client-side mode is more universal, since it works with almost any RDBMS and provides a command line launcher for FreeMarker, which is useful even without database features, e.g. for combining multiple files into a single installation script.

The server-side mode needs an embedded 1.4 compliant JVM and a PL/SQL compiler of version 10 or higher. Thus, it works in Oracle Database 10g, 11g and 12c (all editions except for XE).

The client-side mode suits for any versions of Oracle Database, as well as PostgreSQL, MySQL, DB2 and other RDBMSs, which provide a JDBC driver.

As mentioned above, the code generation problem can usually be solved server-side in pure PL/SQL or Java. But in many cases, when a lot of static code could be isolated and copied to a template unchanged, a solution written using FTLDB would be much more readable and hence supportable than the former. We'll show you the difference in possible solutions on the following problem.

Problem: Suppose you need to create a new orders table, which must be partitioned by the shop_id column values into 4 regions (east, north, south, west) according to the location of shops where orders are placed. The exact partitioning clause is initially unknown and composed from the result of a query to the shops table.

Let's look at three examples (fragments of code) that do the same - generate, print and execute a script for creating the table.

A fragment of the generator package:

A fragment of the generator package:

Notice: Classpath may differ from the one specified above but must include processed templates, ftldb.jar, freemarker.jar and the JDBC driver.

The result of all three executions is the orders table created and the following script printed:

Compare these three solutions. As you may see, the two latter are much simpler and more readable, since there is no quotation and concatenation in the create table statement. The FTL template looks just as plain SQL code with a few extra tags and macros.

Pay attention to how naturally the orders table template is integrated into the generator package body in the second example. And the package is still valid despite containing non-PL/SQL code. The secret is in using PL/SQL conditional compilation directives with the explicit false condition, which makes the compiler ignore it and allows us store FTL templates inside program units. This also allows us to develop code generation logic in IDEs using their content/code assist features for the SQL and PL/SQL languages.

Of course, FTLDB is not a silver bullet. It's not an apt solution for fully dynamic code generation, where a static part cannot be isolated easily. In such cases pure PL/SQL or Java code might be more appropriate.

Summary: If your code generation logic contains more static code rather than dynamic elements, such as loops, conditions and placeholders, and the result must be well-formatted and must look as human-written, try FTLDB. It suits for any kind of server- & client-side code generation and should work for you.

After FTLDB has been installed, the account may be locked and the privileges revoked.

FTLDB API users must be granted execute privileges with the following PL/SQL script:

This block grants privileges only on objects created with the invoker-rights option, and due to this, privileges on them may be granted to PUBLIC, which is quite secure.

Both FTLDB schema and its users must be granted this permission. The Java API reads:

This would grant an attacker permission to get the class loader for a particular class. This is dangerous because having access to a class's class loader allows the attacker to load other classes available to that class loader. The attacker would typically otherwise not have access to those classes.

Take into account the risks related to allowing this permission.

Before installing FTLDB make sure that you have Oracle Client of same or higher version as the database (it must include sqlplus, loadjava, JRE and the JDBC driver). The TNS name of the target database must be registered in your local tnsnames.ora.

Notice: Oracle Client version 11.2.0.1.0 for Windows has a buggy loadjava batch script. If the installation fails on the jar loading phase, upgrade the client to a higher version.

In order to install FTLDB download and unpack the latest version of the installer archive corresponding to your OS from the Releases page. The archive includes:

If you have DBA access to the target database, use the dba_install script. It must be run under any database superuser with the DBA privilege (e.g. SYS or SYSTEM). It installs FTLDB as a standalone schema with the specified name and password and grants it all the required privileges and permissions.

Warning: If the specified schema already exists, it is dropped and recreated during the installation.

Run the DBA installation script from the base directory with the following five parameters:

Notice: If the DBA password contains special characters, the installation may fail due to a peculiarity of sqlplus's connect command implementation.

In order to grant other database users the required Java permissions run the dba_switch_java_permissions script with the following parameters:

In order to grant other database users execute privileges on FTLDB run the dba_switch_plsql_privileges script with the following parameters:

If you don't have full access to the target database, ask the DBA to create a new schema with the required privileges and permissions (or use an existing one).

To install FTLDB as an ordinary user run the usr_install script with the following three parameters:

Run the dba_switch_plsql_privileges script to grant execute privileges on FTLDB objects to other users.

Notice: It is not recommended to install FTLDB into a schema containing other objects. Instead, install it as a standalone schema and create local synonyms for the FTLDB objects.

You can change the default behavior and install FTLDB manually using scripts from the setup directory.

In order to uninstall FTLDB run one of the *_uninstall.* scripts corresponding to your OS and installation mode.

The demo archive contains the installer of another standalone schema, which demonstrates the work of FTLDB with unit tests and several manual scripts.

The installer is itself an example of client-side FTLDB usage (it doesn't access any database but demonstrates several script combining techniques). Check the *.ftl files in the setup directory.

The tests are used for the CI purposes and can be useful as a source of server-side usage examples. Check the ut_ftldb_api$process.pks file, which is probably the most interesting for you.

The demo scripts are not installed automatically. You should run them manually step by step. Explore the demo directory. Each demo contains its own readme or install.sql file. Follow the instructions inside.

The installation process is very similar to the previous one. Run the main installation script from the base directory with the following six parameters:

Notice: Make sure that the target database has the same TNS name on the server and the client. Otherwise some unit tests won't pass.

In order to make a build by yourself you need an Oracle database (optional), JDK 6 (or higher) and Maven 3. The latest versions of both are recommended.

Notice: The client-side tests are also a good source of usage examples.

The project is created and maintained by:

You can connect with the authors via email.

The first FTLDB prototype was written by the authors during their work at CUSTIS.