Code repository for paper entitled as 'Near-Optimal Fingerprinting with Constraints'

NEW: thanks to Pierre Laperdrix, the code is now also available for python 3. Just grab python3-version.zip.

What is this for?

This repository serves the codebase of a scientific conference paper in [1]. The paper shows that limiting the availability of user attributes is not enough for mainting user privacy. In fact, this is shown in two "hot" areas the paper:

As this method is still considered as a valid approach to protect user privacy, the paper shows that it is in fact a weak protection method and if possible, should be avoided.

The paper is available here: Near-Optimal Fingerprinting with Constraints

How can I use this?

The code is consisting of three parts:

You can use python for the first step, then pypy to speed things up.

Simply run the first file (01_build_dataset.py), it will download the dataset in question, and will also convert it to the necessary format.

Finally, it will create two files in the ./data/ folder:

You can have multiple datasets, these should be differentiated with a postfix.

The operation is based on configuration files stored in ./config/. These json files have a couple of entries, and could be used as:

Output in all cases is provided in ./results/.

Each line in an individual fingerprint file is the list of attributes of the fingerprint, negative values are attributes that should not be set to the given user. (Note: for "historical" reasons, attributes are indexed from zero, and to preserve the sign, the zero index is stored as a float value.) 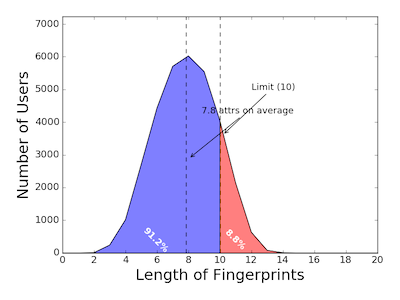 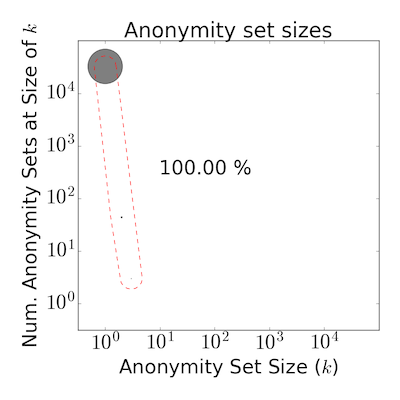 For the latter visualization, you need to get two more scripts:

When having the general fingerprint files ready, we can plot out the anonymity sets with 08_plot_anonsets.py. This will result images like this: 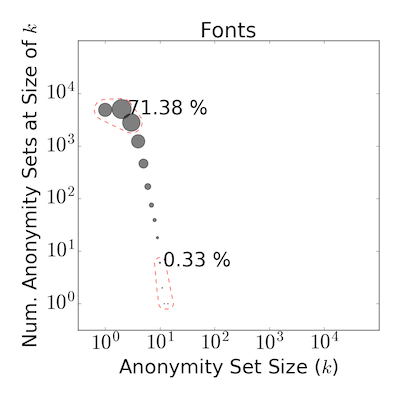 If you find this work useful, especially if you use it whole or in part, please refer it to (similarly) as:

The paper is available here: Near-Optimal Fingerprinting with Constraints

Here is a short teaser:

Several recent studies have demonstrated that people show large behavioural uniqueness. This has serious privacy implications as most individuals become increasingly re-identifiable in large datasets or can be tracked while they are browsing the web using only a couple of their attributes, called as their fingerprints. Often, the success of these attacks depend on explicit constraints on the number of attributes learnable about individuals, i.e., the size of their fingerprints. These constraints can be budget as well as technical constraints imposed by the data holder. For instance, Apple restricts the number of applications that can be called by another application on iOS in order to mitigate the potential privacy threats of leaking the list of installed applications on a device. In this work, we address the problem of identifying the attributes (e.g., smartphone applications) that can serve as a fingerprint of users given constraints on the size of the fingerprint. We give the best fingerprinting algorithms in general, and evaluate their effectiveness on several real-world datasets. Our results show that current privacy guards limiting the number of attributes that can be queried about individuals is insufficient to mitigate their potential privacy risks in many practical cases.

Code repository for paper entitled as 'Near-Optimal Fingerprinting with Constraints'