MultiBuilder is a simple tool that allows you to run a set of programs on multiple configurations (called environments in the program) at the same time. Results from programs that fail execution are presented for inspection.

Currently, MultiBuilder can be compiled for Windows.

If you are in a hurry and just need compiled binary, you can grab it here.

Environment configuration file is split into sections. Besides the special section named Global you can define any number of sections, each describing its own environment. The following example shows environment file used for testing OmniThreadLibrary.

OmniThreadLibrary supports Delphi compilers from version 2007 to 10.2 Tokyo and this configuration file reflects that. Each environment section defines variable Path. We'll see in the section Project below how this variable is used in practice.

Special section Global defines variables that are defined for all environments. In this example it defines variables Scratch and DccFilterSwitch which are used in the project file. (For more information see Running projects below.)

Special macro $(EnvironmentName) always expands to the name of environment used to run the project. In the example above, this macro could expand to Delphi 2007, Delphi XE5, Delphi 10.1 Berlin, and so on.

Project configuration file is split into sections. Special section Global defines commands that are always executed. Sections with names corresponding to environment names contain commands that are only executed in that environment. If a section for specific environment doesn't exist in the project file, commands from the special Default section will be used. (For more information see Running projects below.)

WorkingDir sets base folder in which the following commands (Execute) are executed. WorkingDir must be set before the first Execute command. Failure to do so will result in an error.

Execute introduces a command that will be executed.

All other commands are ignored.

If you click the Run All button or press the F9 key, the current project is started in all environments.

If an environment is selected and you click the Run Selected button or press the Alt+F9 key combo, the project is started in selected environment.

Each environment executes the project in its own thread. You can therefore select one project, click Run Selected, repeat that with another project and both will be executed in parallel.

In each environment the project is executed by following these steps:

For example, if we use the OmniThreadLibrary configurations mentioned above, environment Delphi 2007 would execute all commands from the Global section. As there exists a Delphi 2007 section, commands from the Default section are ignored. Delphi 2007 section contains just one setting with key Null, which is ignores. (At least one setting must be stored in a section, otherwise the information about that section is lost when configuration file is loaded.)

Following command can be used to start MultiBuilder and load appropriate environment and project configurations:

After a command (introduced with a Execute key) is executed, its output is run through a filter. MultiBuilder determines the filter to be used by using the command name (excluding a path but including the extension) as a lookup key into the Filters section of the project configuration. If an appropriate setting is found, macros in the right-hand side are expanded.

Following built-in filters are implemented at the moment.

This filter removes most of the crud produced by dcc* Embarcadero compilers and leaves only lines that are interesting to the programmer.

This parameter (introduced with -FailOnHint or /FailOnHint) causes execution to fail if dcc compiler reported a hint.

This parameter (introduced with -FailOnWarning or /FailOnWarning) causes execution to fail if dcc compiler reported a warning. An example can be seen in OmniThreadLibrary configuration files, above.

To request macro expansion, variable name must be wrapped with $( and ). For example, the following two lines from an environment configuration file define variable Scratch that refers to macro $(EnvironmentName) and special command ForceDir refers to macro $(Scratch).

For example, when running the OmniThreadLibrary project in the Delphi 2010 environment, these two settings would expand to:

Except when referring to a special variable EnvironmentName, macro expander first tries to find the variable in the currently active environment section and if that fails it uses the value from the Global section.

Variables can only be defined in the environment configuration file. 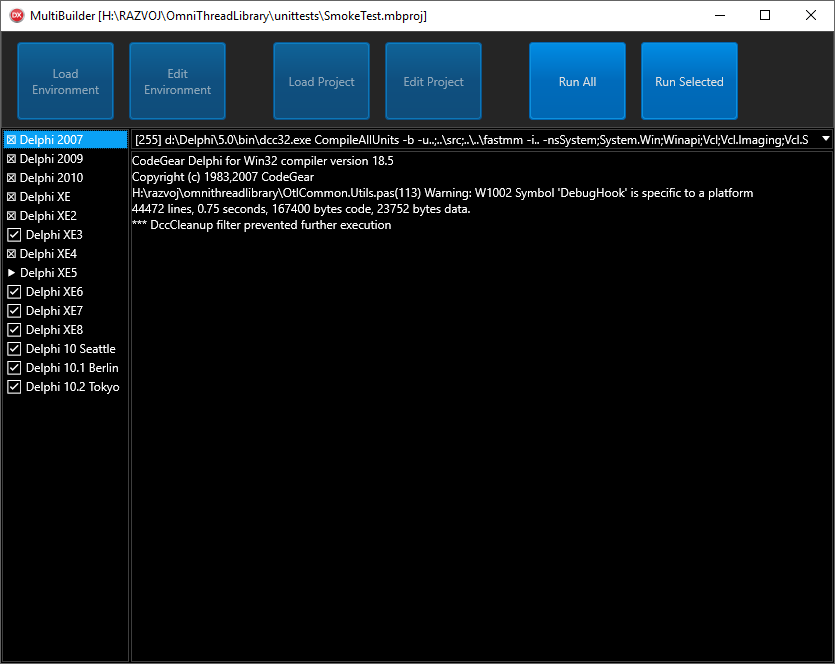 The list on the left contains all environments. An icon left to the environment name indicates the status of operation in this environment.

Indicates that the project run without a problem.

☒ Indicates that problems were encountered.

⏵ Indicates that the project is still executing.

The editor on the right shows problems in the selected environment (Delphi 2007). Combo box at the top contains exit code [255] and program line d:\Delphi\5.0\bin\dcc32.exe CompileAllUnits .... The output of the program is shown below. Although the dcc32 compiled the program without an error, the output was passed through the DccCleanup filter with the FailOnWarning parameter which stopped the further execution because dcc32 reported one warning.

I'll gladly accept any pull request that makes this project better and more versatile. If you would like to contribute but don't know where to start, check the Issues.