This file serves as a repository of common problems setting up React Hot Loader, and solutions to them. Know a problem? Feel free to send a PR with edits.

When the page loads 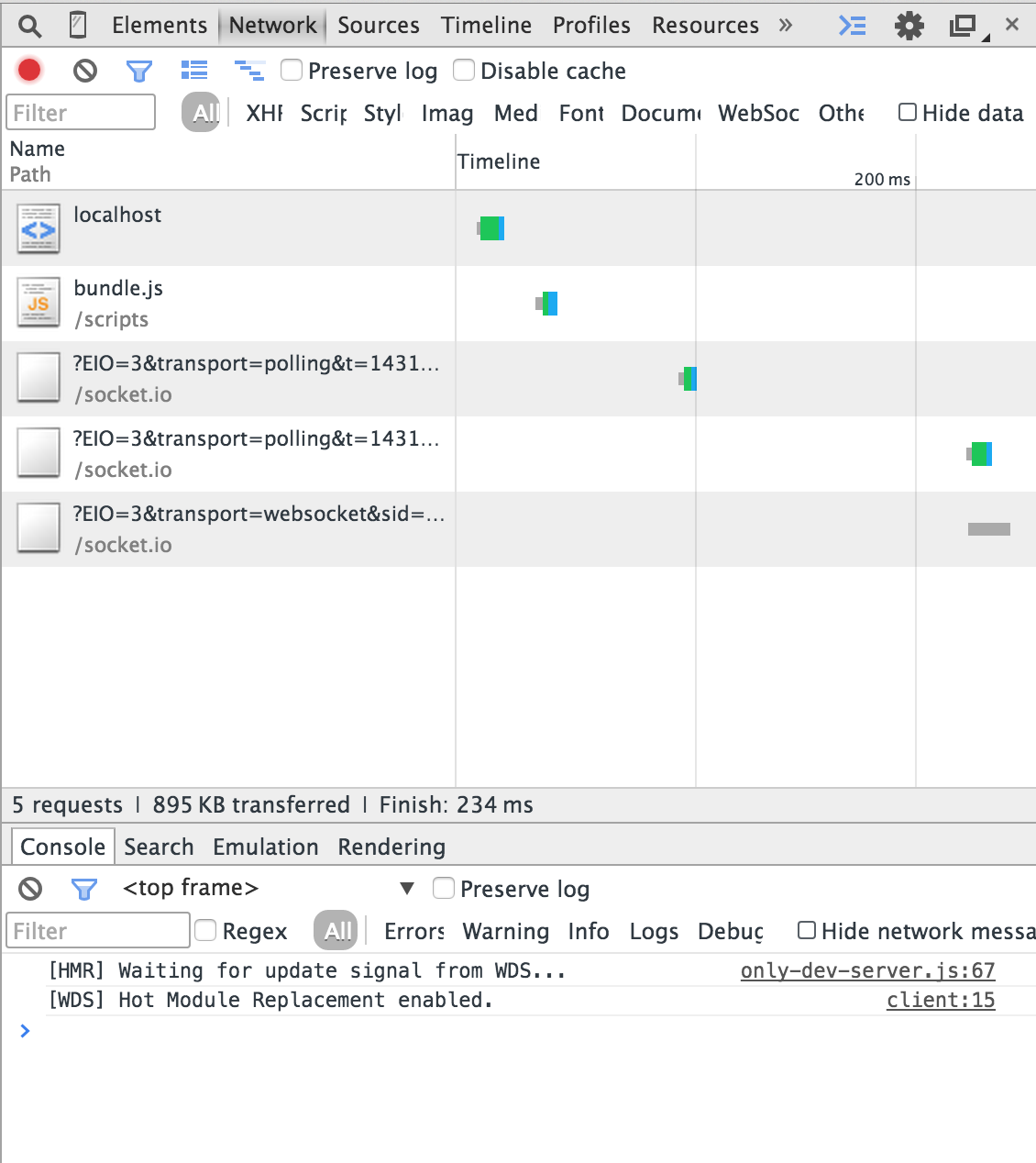 When you save a file 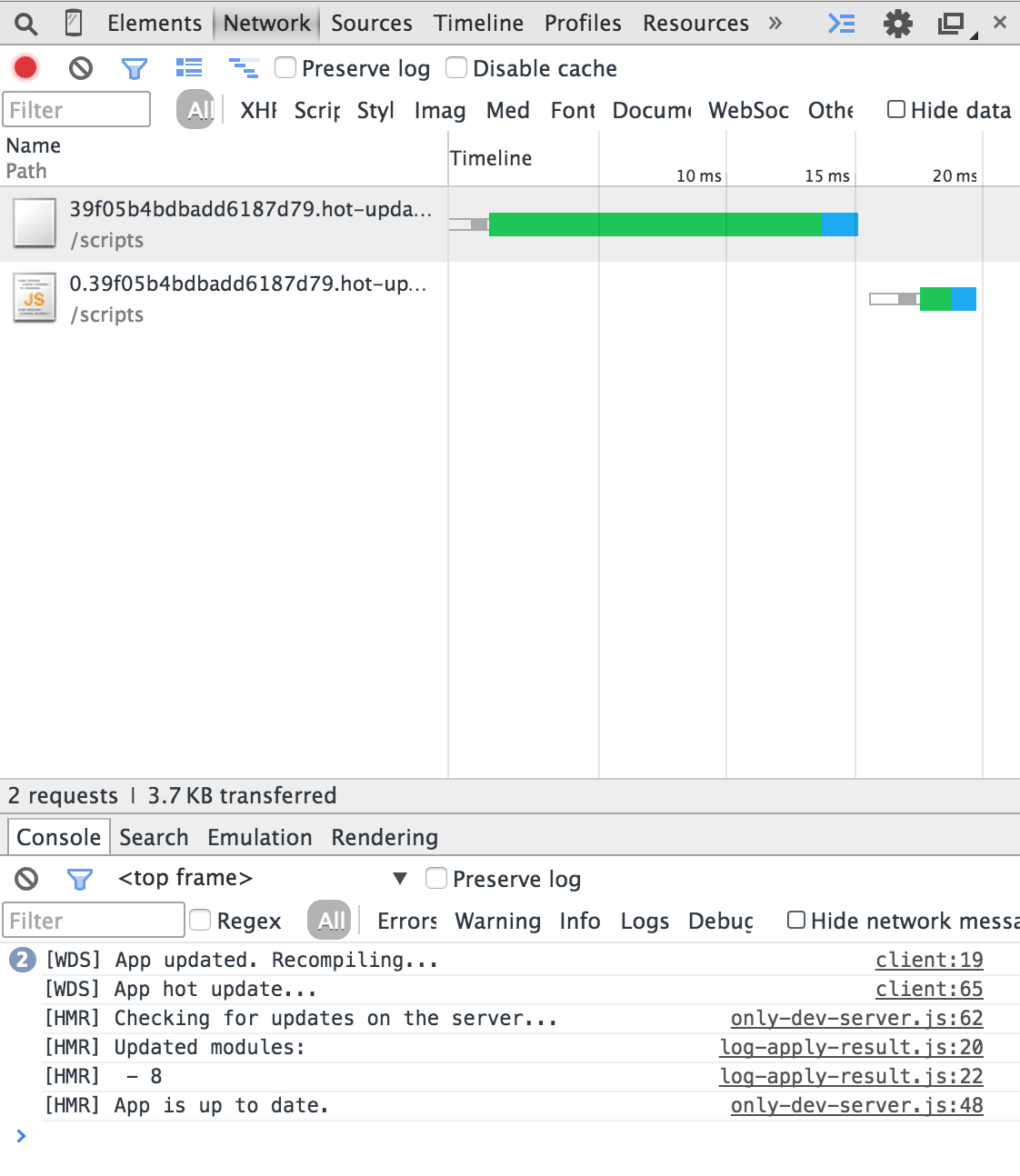 If you don't see some of the messages, or some of the requests, or if some of the requests fail, this may be a symptom of an incorrect configuration. Comparing your setup with React Hot Boilerplate may help you find the mistake. If hot loading appears to be working but you still do not see all of the above messages, you may need to check your dev server's clientLogLevel setting. Depending on what it is set to, you may not see all of these messages, so you may need to adjust this setting to ensure that your configuration is correct.

If you're a TypeScript user then to get set up with HMR then it's not unusual to alias module as an any like so:

DON'T DO THIS. It will result in full page reloads each time you make a change. Instead do something like this:

If you're using a precompiled React instead of react npm package, React Hot Loader configuration will need a few tweaks. See Usage with External React.

Make sure you have '.js' in resolve.extensions section of Webpack config, or Webpack won't be able to find any JS files without explicitly specifying extension in require.

SyntaxError: 'import' and 'export' may only appear at the top level

Webpack applies loaders right to left, and we need to feed Babel's output to React Hot Loader, not vice versa.

If you're using a relative output path in your Webpack config, wrap it in a call to path.resolve():

If you used WebpackDevServer CLI mode and after switching to Node it crashes with Error: Invalid path '', you probably didn't have path specified in output at all. You can just put path: __dirname there, as it won't matter for development config.

Most likely you used npm link or yarn link to use a development version of a package in a different folder, and React Hot Loader processed it by mistake. Read the guide about linking package in README linking section

[socket.io] Cannot use 'in' operator to search for 'document' in undefined

Make sure you have exclude: /node_modules/ or, better, include: path.join(__dirname, 'src') (path depends on your application) in loader configuration just like on this line. You never need to process node_modules with React Hot Loader. If you use other loaders such as jsx?harmony or babel, most likely they also need to have include specified.

Generally, the best way to fix this class of errors is to compare your setup to React Hot Boilerplate very carefully and see what's different.

WebpackDevServer CLI mode behaves slightly differently from its Node API. When in doubt, I suggest you use Node API like React Hot Boilerplate does.

When using WebpackDevServer CLI flag --hot, the plugin new HotModuleReplacementPlugin() should not be used and vice versa, they are mutually exclusive but the desired effect will work with any of them.

No 'Access-Control-Allow-Origin' header is present on the requested resource.

If you're trying to access Webpack Dev Server from a URL served on another port, you may try:

The following modules couldn't be hot updated: (They would need a full reload!)

You also get this warning in v1.x if you write your root component as stateless plain function instead of using React.Component. This problem is already solved completely in the upcoming v3.x.

This warning may also appear if you edit some non-component file which is required from files other than components. This means hot update bubbled up, but the app couldn't handle it. This is normal! Just refresh.

If you get this warning together with a 404 for hot-update.json file, you're probably using an ancient version of webpack-dev-server (just update it).

I see “[WDS] Hot Module Replacement enabled” but nothing happens when I edit App.js

If you're running Node 0.11.13, you might want to try updating to 0.12. Some people reported this helped solve this problem. Also make sure that your requires have the same filename casing as the files. Having App.js and doing require('app') might trip the watcher on some systems.

OS X also has a rarely-occuring bug that causes some folders to get 'broken' with regards to file system change monitoring. Here are some suggested fixes.

I see “[HMR] Nothing hot updated.” and nothing happens when I edit App.js

If you have several entry points in entry configuration option, make sure webpack/hot/only-dev-server is in each of them:

You will have to include "client.js" in your host page for the hot updates to work. For example:

The entry points that don't have webpack/hot/only-dev-server (or webpack/hot/dev-server if you fancy occasional reloads) won't know how to apply hot updates.

If you combine WebpackDevServer with an existing server like Express and get this error message on hot updates, it is because Webpack is configured to request hot updates from the current hostname. So if your Express server is on 8000 and publicPath in Webpack config is /build/, it will request hot updates from http://localhost:8000/build/, which in your case is served by Express. Instead, you need to set publicPath to point to the port where WebpackDevServer is running. For example, it could be http://localhost:9000/build/.

Verify that if you have enough available watchers in your system. If this value is too low, the file watcher in Webpack won't recognize the changes:

First, make sure you have recent versions of Webpack and Webpack Dev Server (>= 1.7 is fine). Earlier versions use 404 code when no updates were available, so it wasn't technically an error.

Now, take a look at the path where they are requested. Webpack uses output.publicPath from Webpack config to determine this path. If you forget to specify it, Webpack will request updates from a relative path to the current one, so any client-side routing will break it.

Normally you want it to be '/' if you're serving scripts from root, something like '/scripts/' if you have a virtual path for scripts, and something like 'http://localhost:port/scripts/ if you're using Webpack only for scripts but have another primary server like Express. This config variable must also match publicPath option specified when creating WebpackDevServer instance. Take a look at React Hot Boilerplate to get an idea.

It's slowing down my build!

Make sure you have include limited to your app's modules in loader configuration just like on this line. You never need to process node_modules with React Hot Loader.

My bundle is so large!

Make sure you have separate configs for development and production. You don't need react-hot in loaders or webpack-dev-server/client or webpack/hot/only-dev-server in production config. They are only for development. For easier maintenance, you can set an environment variable before invoking Webpack and read it in config.

Also make sure you have these plugins in production config:

Oh, and don't forget to remove devtool: 'eval' from a production config. Otherwise Uglify won't uglify anything at all.

The problem is that by default WebpackDevServer doesn't deal with HTML5 History correctly and the server won't route the url as it should. You can fix this issue by setting historyApiFallback: true. Here's a full example:

After this you should be able to access your SPA via any url that has been defined in it.

The problem is that after hot module update some branches of React Tree differs from the previous versions. As result React-hot-loader will not update these branches at all, and you may lose internal components state.

The equality of Components are defined as:

Not all of my code got updated.

Hot module replacement is a tricky thing. Just double check that you are not exporting anything else from the modules with hot exported components – functions, constants, anything NOT REACT.

hot function setups module self-acceptance. And it may be a dangerous thing.

RHL is not working for Electron or Parcel

hot function is not tested in these environments, yet. Please use old school AppContainer and setup HRM manually.

RHL is not working with Webpack DLL

React Hot Loader rely on a Babel transformation that register all exports in a global. That's why dependencies included in Webpack DLL will not work.

React-hot-loader found an Element without instrumentation due to a wrong configuration. To fix this issue - just require RHL before React.

Example of a wrong configuration: