SendMIDI is a multi-platform command-line tool makes it very easy to quickly send MIDI messages to MIDI devices from your computer.

All the heavy lifting is done by the wonderful JUCE library.

This tool is mainly intended for configuration or setup through Control Change, RPN and NRPN messages, but many other MIDI messages can be sent.

Here's a tutorial video about both SendMIDI and ReceiveMIDI, including some tips and tricks of how to use the command-line on macOS: 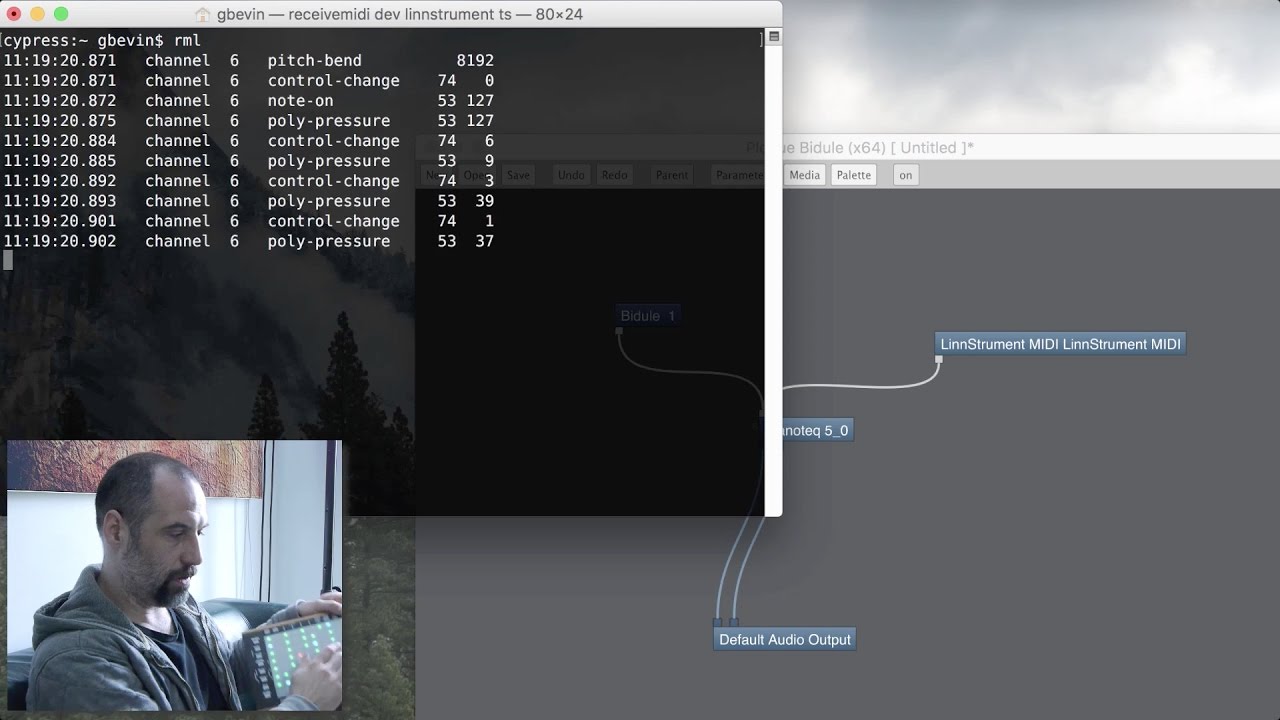 You can download pre-built binaries from the release section: https://github.com/gbevin/SendMIDI/releases

Since SendMIDI is free and open-source, you can also easily build it yourself. Just take a look into the Builds directory when you download the sources.

If you're using the macOS Homebrew package manager, you can install SendMIDI with:

To use it, simply type "sendmidi" or "sendmidi.exe" on the command line and follow it with a series of commands that you want to execute. These commands have purposefully been chosen to be concise and easy to remember, so that it's extremely fast and intuitive to quickly shoot out a few MIDI messages.

These are all the supported commands:

Alternatively, you can use the following long versions of the commands:

By default, numbers are interpreted in the decimal system, this can be changed to hexadecimal by sending the "hex" command. Additionally, by suffixing a number with "M" or "H", it will be interpreted as a decimal or hexadecimal respectively.

The MIDI device name doesn't have to be an exact match. If SendMIDI can't find the exact name that was specified, it will pick the first MIDI output port that contains the provided text, irrespective of case.

Where notes can be provided as arguments, they can also be written as note names, by default from C-2 to G8 which corresponds to note numbers 0 to 127. By setting the octave for middle C, the note name range can be changed. Sharps can be added by using the '#' symbol after the note letter, and flats by using the letter 'b'.

In between commands, timestamps can be added in the format: HH:MM:SS.MIL, standing for hours, minutes, seconds and milliseconds (for example: 08:10:17.056). All the digits need to be present, possibly requiring leading zeros. When a timestamp is detected, SendMIDI ensures that the time difference since the previous timestamp has elapsed.

When a timestamp is prefixed with a plus sign, it's considered relative and will be processed as a time offset instead of an absolute time. For example +00:00:01.060 will execute the next command one second and 60 milliseconds later. For convenience, a relative timestamp can also be shortened to +SS.MIL (for example: +01.060).

Here are a few examples to get you started:

List all the available MIDI output ports on your system

Switch the LinnStrument to User Firmware Mode by setting NRPN 245 to the value 1:

Load the commands from a text file on your system and execute them, afterwards switch to the "Network Session 1" port and send it program change number 10:

Change parameters on a Yamaha FS1R over SysEx:

The text file that can be read through the "file" command can contain a list of commands and options, just like when you would have written them manually on the console (without the "sendmidi" executable). You can insert new lines instead of spaces and any line that starts with a hash (#) character is a comment.

For instance, this is a text file for one of the examples above:

The input of the SendMIDI tool is compatible with the ReceiveMIDI tool, allowing you to play MIDI message sequences that were stored earlier. By using Unix-style pipes on the command-line, it's even possible to chain the receivemidi and sendmidi commands in order to forward MIDI messages.