This code allows you to load any existing Azure Data Factory project file (*.dfproj) and perform further actions like "Export to ARM Template" or to debug custom C# activities

This repository provides some tools which make it easier to work with Azure Data Factory (ADF). It mainly contains two features:

In addition, the repository also contains various samples to demonstrate how to work with the ADF Local Environment.

The package can now be downloaded from the NuGet gallery: https://www.nuget.org/packages/gbrueckl.Azure.DataFactory.LocalEnvironment

If you install it from within Visual Studio, simply search for "gbrueckl": 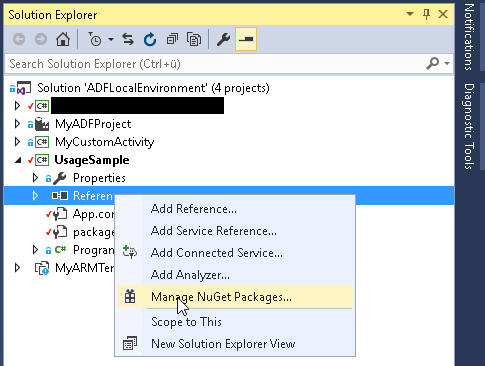 To set everything up, it is recommended to add a new Console Application project to your existing VS solution which already contains the code for the custom activity and also the ADF project itself. Other setups (e.g. with multiple solutions/projects) would also work but make it much harder to develop and debug your custom code. Once you have added your Console Application, you need to add the NuGet package "gbrueckl.Azure.DataFactory.LocalEnvironment" - see [Setup] above.

Now you can simply add breakpoints to your custom activity's code, execute the Console Application and the debugger will jump in once your breakpoint is reached:

A very common requirement when it comes to ADF deployment is to integrate it with regular ARM deployments. Unfortunatelly, at the time being, Microsoft does not offer a native way to convert an ADF project into a deployable ARM template. However, ADFLocalEnvironment class allows you to do exactly this. The first steps to setup everything are very similar to the steps described above but instead of calling the ExecuteActivity-function, we now call the ExportARMTemplate-function which supports the following parameters:

The ExportARMTemplate-function will then process the following steps:

Those newly copied/created have to be added to the ARM project manually once. First we need to active "Show Hidden Items" at the level of our ARM project: 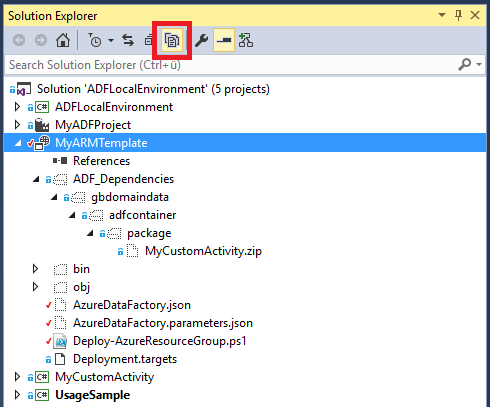 And then we can include the necessary files (see above) in our ARM project: 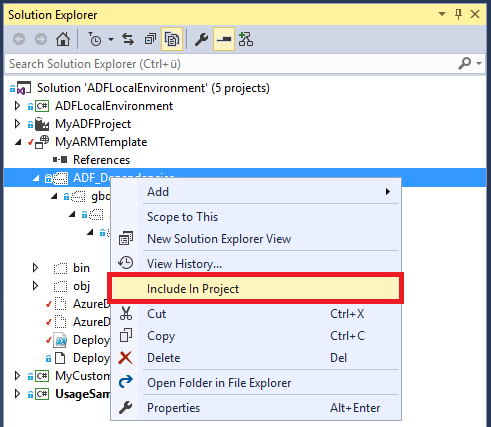 For all of our dependencies we also need to change the properties to make sure the dependencies are also copied to the output folder: 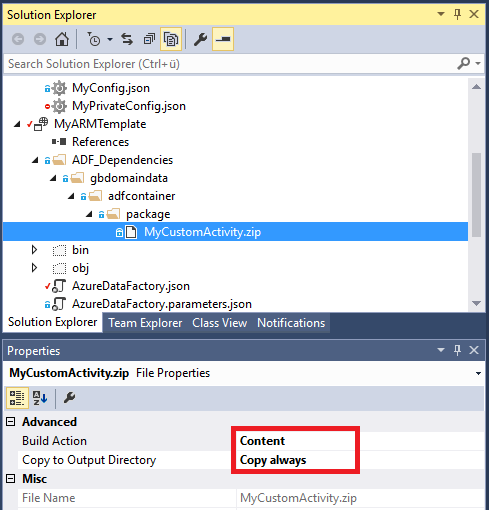 If your project actually contains dependencies, you also need to modify the PowerShell script that comes with the ARM project (\MyARMTemplate/Deploy-AzureResourceGroup.ps1) and add the lines of code generated by the GetARMPostDeploymentScript-function: 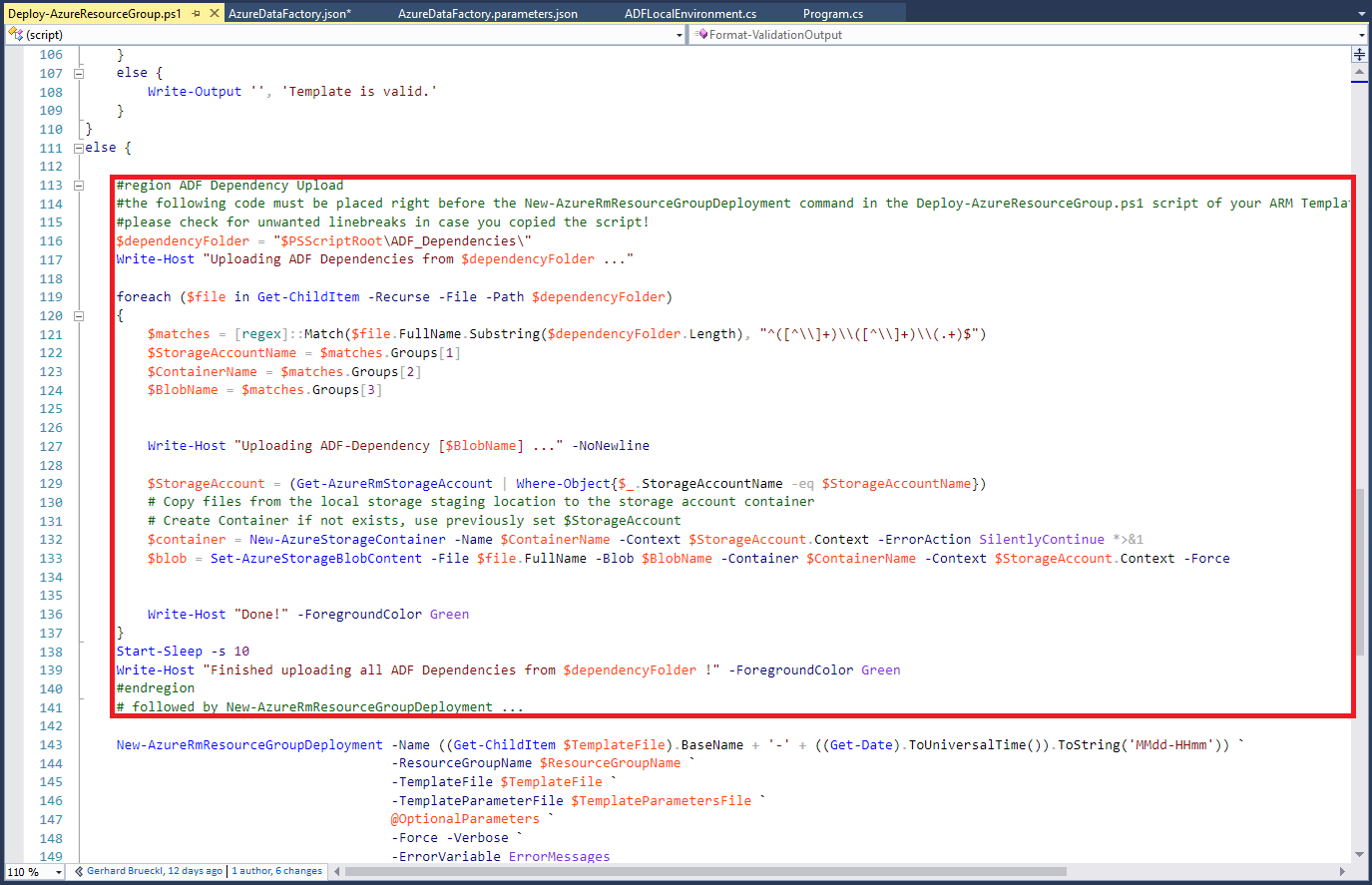 Now you can deploy your ADF project just like any other regular ARM template: 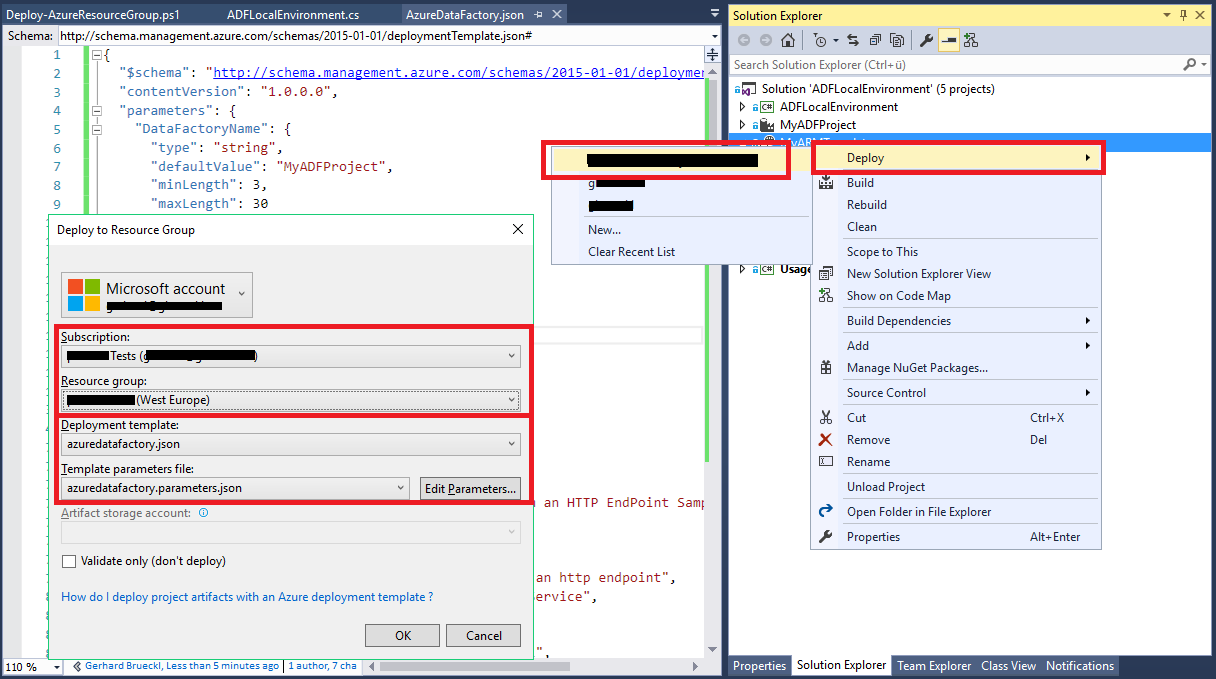 This code allows you to load any existing Azure Data Factory project file (*.dfproj) and perform further actions like "Export to ARM Template" or to debug custom C# activities