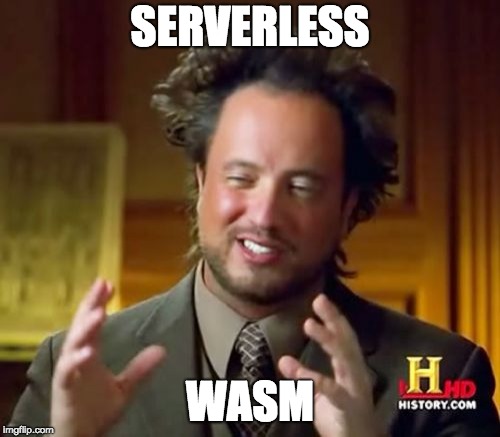 This is a small demo of Web Assembly's potential outside of browsers. It has been designed with client side execution in mind, but there's nothing preventing it from running in other platforms. There are people working on running WASM binaries from a shell, and putting WASM code inside kernels.

Here are some benefits of Web Assembly's design:

And here's the best part: it is meant to be a target language, a lot of other languages will compile to WASM. You can already write C or C++ and compile to WASM with emscripten. Rust's compiler natively supports it. There are demos in Go, Haskell and Ruby.

The network effects are huge: the major browsers implement it and can run any WASM app, and every language wants to run on the client side.

Now, what happens when you leverage these advantages to build a server platform? You get a system that can run a lot of small, sandboxed, resource limited applications, written in a lot of different languages.

You do not care about how to start it, you don't need to map it to filesystems and common runtimes like containers do. You just have some bytecode that imports a few functions, and runs well isolated.

This is a bit like the serverless promise, the ability to run arbitrarily small functions, but without even caring about the startup time or the state size, this will be the smallest you can think of.

Currently, the server is able to load a pre built web assembly binary, exports some function that it can use for logging, to build a response and connect to other servers, and handle requests using that wasm file (as long as it exports a "handle" function).

The virtual machine currently exposes the following functions, that you can use to build your response:

You define which WASM binary will handle which requests through a TOML configuration file:

You can build and launch the server as follows:

While I was building this, I heard of IceCore, which looks quite cool, with JIT support, etc. It's quite nice to see multiple platforms attempting this. Maybe we'll be able to agree onthe "web assembly standard API" so WASM apps can run on any of those :)