This is a CLaSH implementation of the 1978 Space Invaders arcade machine by Taito. 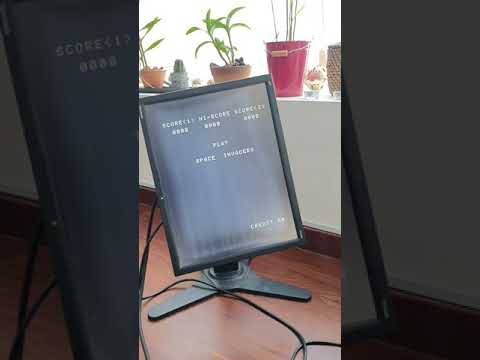 This implementation doesn't aim to be cycle-accurate; it wouldn't matter for much anyway, since the CPU runs at the VGA output pixel clock of 25 MHz, whereas the real cabinet ran at 2 MHz. Luckily, Space Invaders does all animations keyed to two 60 Hz timers triggered by the video system.

Sound is not implemented at all.

The back-panel DIP switches are not yet mapped to anything.

Make a file called build.mk with content similar to the following:

The CLASH, ISE and VIVADO fields are to optionally wrap invocations of the CLaSH compiler and the Xilinx ISE / Vivado toolchain in case you want to run them via Stack, Docker, Nix, etc.

Then you can build for the Papilio Pro by running the included mk script.