SwarmCI - Build Your Code in the Swarm

SwarmCI (super pre-alpha) is a CI extension, meaning, you can use it to extend your existing build system (jenkins, bamboo, teamcity, etc), with parallel, distributed, isolated build tasks by leveraging your Docker Swarm. 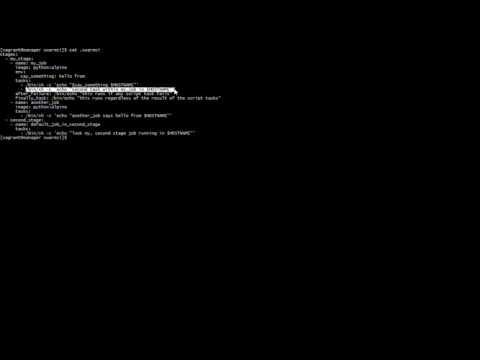 This project inspired me because of the problems I've faced with conventional CI platforms like Jenkins, Bamboo, Teamcity.

You can use SwarmCI to extend an existing CI system (Bamboo, TeamCity, Jenkins, etc) with a few steps.

Each job consists of several pieces of information:

When a job is converted to a job-matrix, you get all possible combinations of image and env variables. Here is an example job matrix that expands to 6 individual (3 * 2) jobs.

Stage - Stages are individual sequential steps. Stages provide a mechanism to break a build into multiple chunks of work such as compilation, testing, and deployment. When a Stage executes, all of the Jobs within that Stage begin executing in parallel, greatly reducing its execution time.

Job - Jobs are smaller, independent units of work, which can run in parallel. Each job runs in a separate container. Jobs in subsequent stages will not begin executing until all jobs in the previous stage have completed successfully. A single job failure will result in a failed stage (though it does not cause other jobs to stop running).

Command - Commands are literal commands run in a common container with the job in which they are defined, and they run in series. A single command failure (exit_code != 0) will halt a job and mark the job as a failure.