Goby - Yet another programming language written in Go 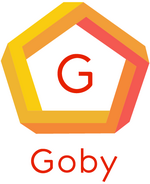 Goby is an object-oriented interpreter language deeply inspired by Ruby as well as its core implementation by 100% pure Go. Moreover, it has standard libraries to provide several features such as the Plugin system. Note that we do not intend to reproduce whole of the honorable works of Ruby syntax/implementation/libraries.

The expected use case for Goby would be backend development. With this goal, it equips (but not limited to) the following features:

Note: Goby had formerly been known as "Rooby", which was renamed in May 2017.

Click to see the demo below (powered by asciinema and GIPHY). A 3D visualization of Goby codebase, powered by GoCity Confirmed Goby runs on Mac OS and Linux for now. Try Goby on Windows and let us know the result.

A. Via Homebrew (binary installation for Mac OS)

In the case, $GOBY_ROOT is automatically configured.

Try this if you'd like to contribute Goby! Skip 1 if you already have Golang in your environment.

C. Installation on a Linux system

In order to install Go, Goby and PostgreSQL on a Linux system, see the wiki page.

If you have any issue installing Goby, please let us know via GitHub issues

Goby has official docker image as well. You can try the Plugin System using docker.

The Goby syntax is currently a subset of the Ruby one, with an exception (get_block), therefore, it's possible to attain syntax highlighting on any platform/editor by simply switching it to Ruby for the currently opened file.

Sublime Text 3 users can use the Only Goby package, by typing the following in a terminal:

Vim users can use the vim-goby-syntax-highlighting definition, by typing the following in a terminal:

More sample Goby codes can be found in sample directory.

Join us on Slack!

The followings are the essential resources to create Goby; I highly recommend you to check them first if you'd be interested in building your own languages:

Goby - Yet another programming language written in Go