Gridsync aims to provide a cross-platform, graphical user interface for Tahoe-LAFS, the Least Authority File Store. It is intended to simplify the Tahoe-LAFS installation and configuration process and ultimately provide user-friendly mechanisms for common use-cases like backing up local files, synchronizing directories between devices, and sharing files and folders with other users across all major desktop platforms (GNU/Linux, macOS, and Windows). More broadly, Gridsync aims to duplicate most of the core functionality provided by other, proprietary "cloud" backup and synchronization services and utilities (such as Dropbox and BitTorrent Sync) but without demanding any sacrifice of the user's privacy or freedom -- and without requiring usage or knowledge of the command line. Accordingly, Gridsync is developed with the goal in mind of making secure cloud storage freely available to everyone, without exception, without added barriers, and regardless of one's operating system choice.

Tahoe-LAFS already provides a number of highly desirable properties for secure file-storage: in addition to offering client-side encryption, it is decentralized, robust, free (as in both beer and speech), stable and mature, and written by a group of very talented developers. Unfortunately -- and despite all of its technical merits -- Tahoe-LAFS has a number of persistent usability issues which steepen its learning curve: its installation requires manual compilation from source on Windows and macOS, its configuration consists in hand-editing text files, its primary interface requires heavy command line usage, and many of its fundamental concepts (e.g., "dircap", "shares", "servers-of-happiness") are opaque to new users or otherwise demand additional reading of the project's extensive documentation. Accordingly, Tahoe-LAFS' userbase consists primarily in seasoned developers and system administrators; non-technical users are naturally excluded from enjoying Tahoe-LAFS's aforementioned advantages.

The Gridsync project intends to overcome some of Tahoe-LAFS's usability barriers by means of following features: 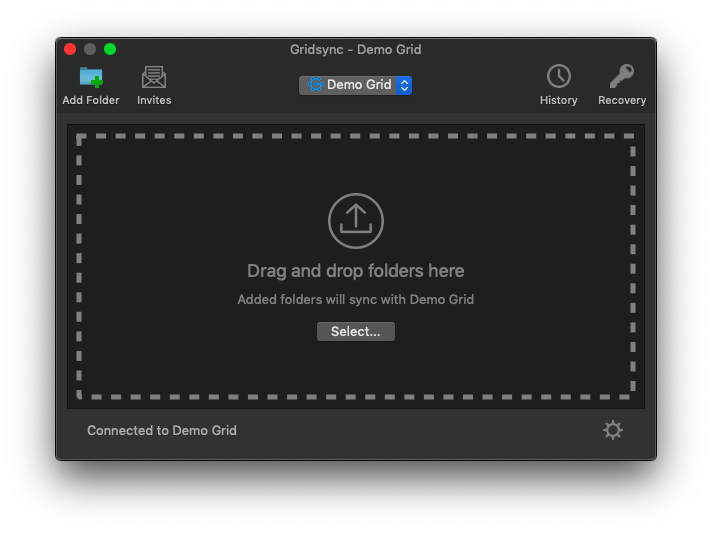 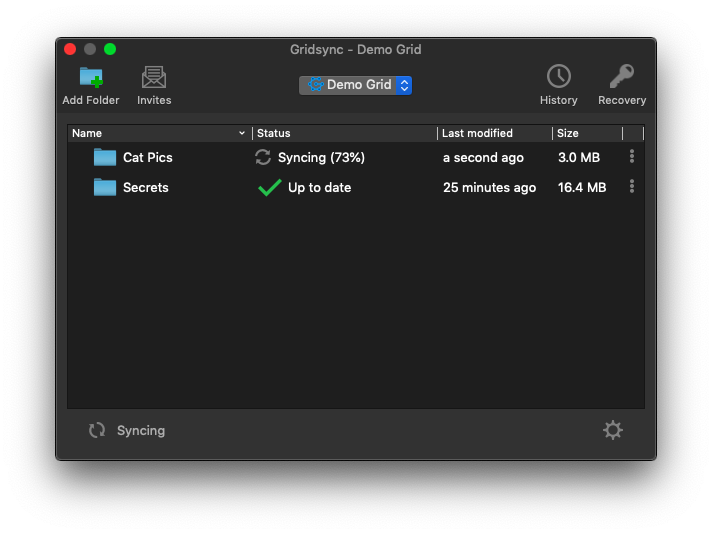 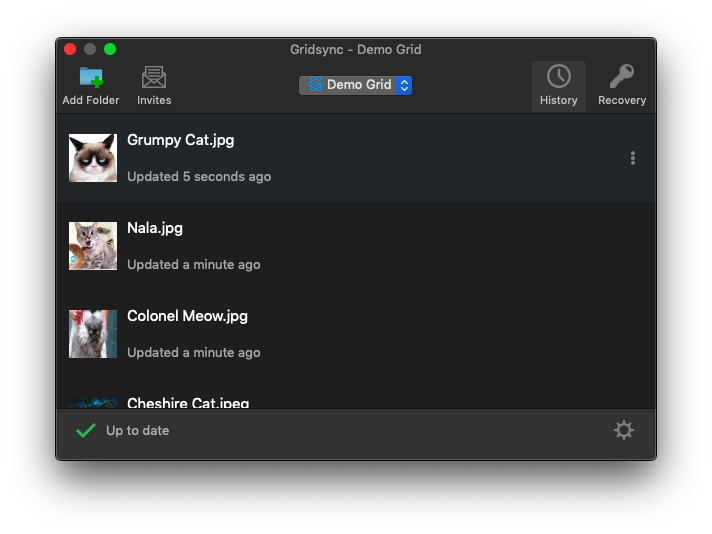 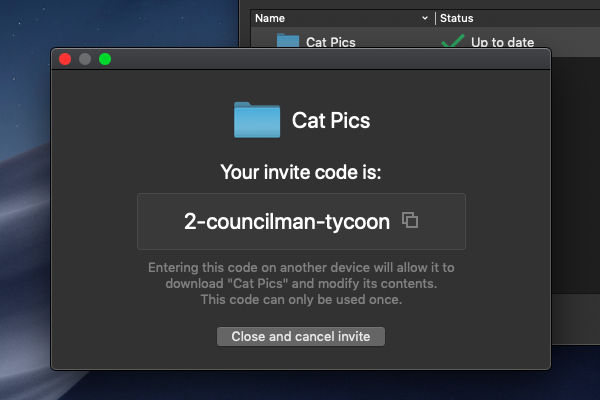 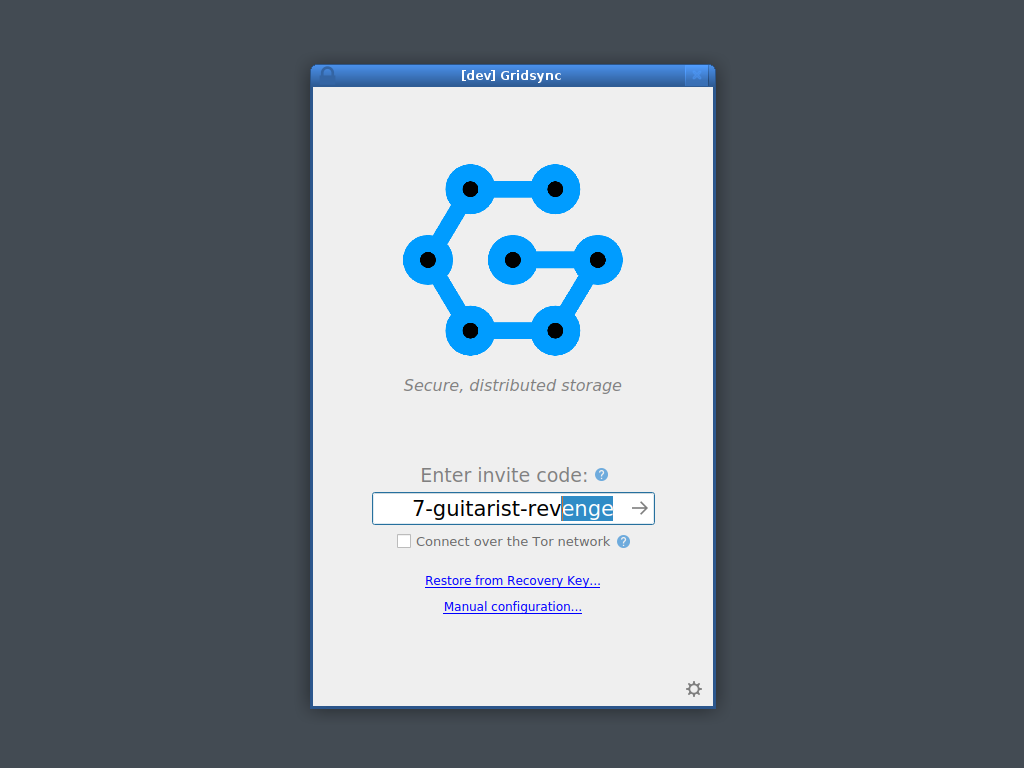 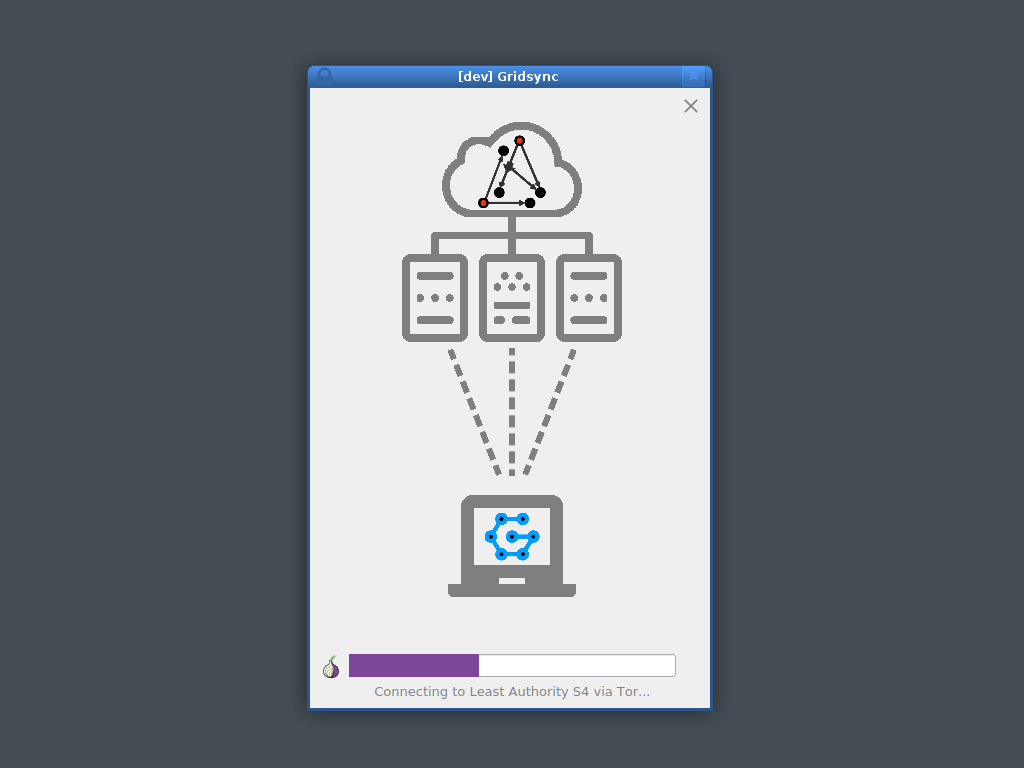 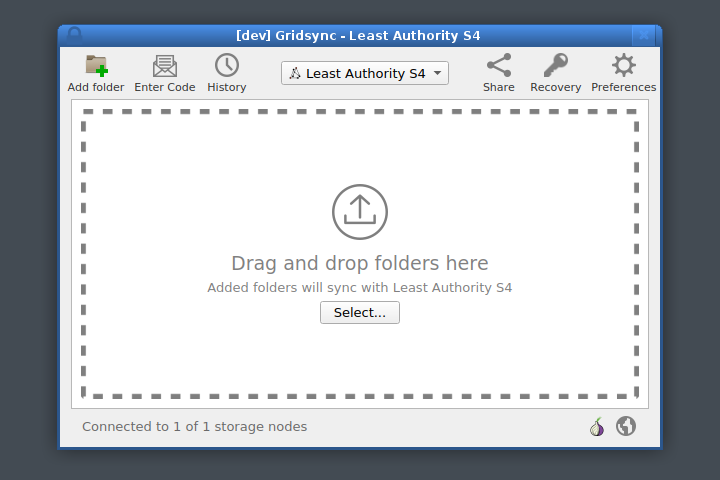 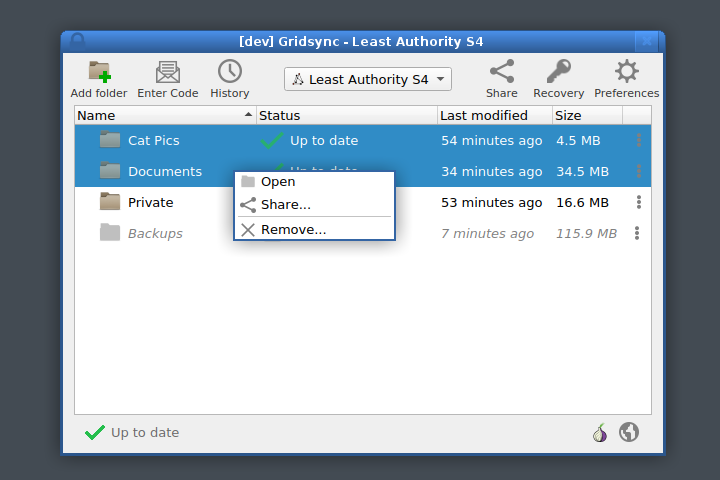 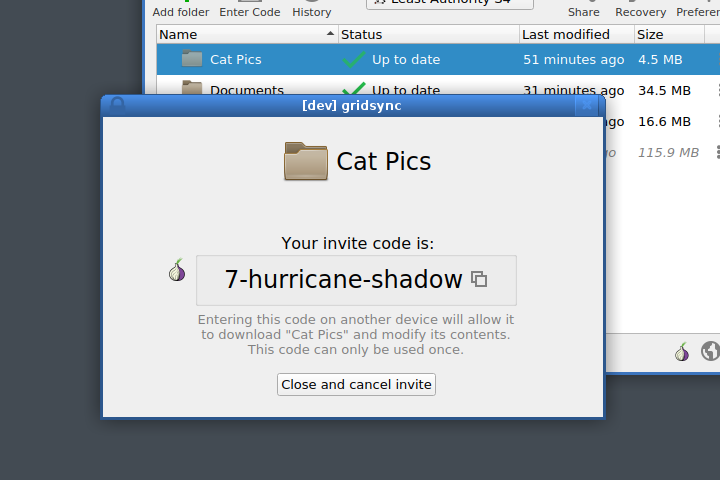 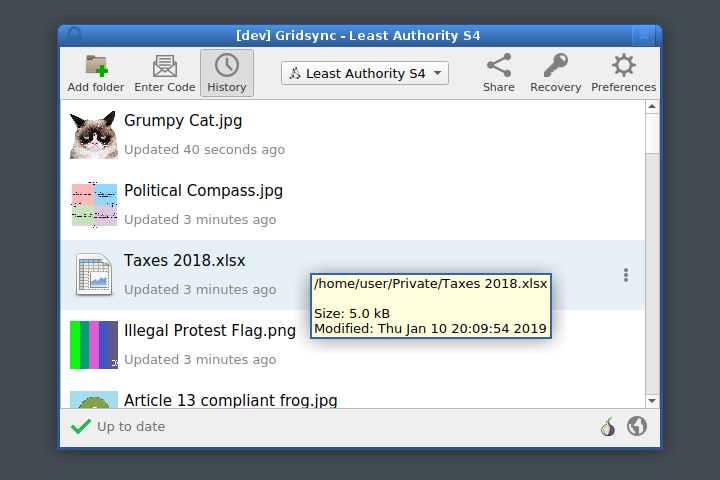 Downloads for "stable" releases of Gridsync can be found on the project's GitHub Releases page and include pre-built/binary distrubitions for all three major desktop platforms that have been compiled inside dedicated virtual machines on dedicated hardware. Users wishing to install these packages are strongly urged to verify their signatures before running or, alternatively, to build/install Gridsync manually from source (see below).

To install and run Gridsync on macOS (64-bit only; supporting macOS 10.13 "High Sierra" and above):

Alternatively, Windows users who do not wish to use the executable installer can download and verify Gridsync-Windows.zip, extract the enclosed "Gridsync" folder anywhere, and run Gridsync.exe.

Because Tahoe-LAFS has not yet been ported to python3, and because some GNU/Linux distributions might contain especially old versions of some dependencies, it is recommended to install and run Tahoe-LAFS and Gridsync inside their own virtual environments using updated dependencies from PyPI (ideally with hashes verified).

The following series of steps (run from the top level of the Gridsync source tree) should work on most Debian-based GNU/Linux distributions:

Users of other distributions and operating systems should modify the above steps as required (for example, by installing Xcode on macOS in addition to python -- or the dependencies listed at the top of make.bat in the case of Windows).

Alternatively, users can use PyInstaller to generate a more "portable" binary distribution of Gridsync and Tahoe-LAFS (suitable for running on other machines of the same platform) by installing the required dependencies and typing make in the top-level of the source tree. This will create a standalone executable distribution of Gridsync and all of its dependencies (including a "frozen" python interpreter and Tahoe-LAFS), placing the resultant files/installers in the dist/ subdirectory.

Note, however, that PyInstaller-generated binaries are typically not backward-compatible; a PyInstaller executable that was built on a newer GNU/Linux distribution, for example (i.e., with a more recent version of glibc) will not run on older distributions. Accordingly, if you intend to distribute Gridsync binaries for use on a wide range operating system versions, it is recommended that you build the application on as old of a system as is reasonable for a given platform (i.e., one which can build and run Gridsync but which still receives security updates). Presently, CentOS 7, macOS "Mojave" (10.14), and Windows Server 2012 R2 arguably constitute the most suitable candidates for GNU/Linux, macOS, and Windows build systems respectively (insofar as binaries generated on these systems will be forward-compatible with all others in that platform-category that are still supported upstream).

To help facilitate the testing, building, and distribution of forward-compatible binaries -- as well as to enable a crude form of "cross-compilation" -- a custom Vagrantfile has been provided inside the Gridsync source tree; users or developers with Vagrant and VirtualBox installed [†] can automatically provision a complete Gridsync build environment that produces forward-compatible binaries via the following commands:

These will download and configure a suitable virtual machine for the target platform (from the public Vagrant Boxes catalog), provision it with all required dependencies (such compilers/SDKs, python interpreters, X11 libraries, etc.), copy the Gridsync source code into the target VM, run the Gridsync test suite, and compile a final PyInstaller-generated binary package suitable for distribution (the result of which can be found in the ~/gridsync/dist directory of the guest VM).

Alternatively, users with docker installed can use the CentOS 7-based gridsync-builder image to build equivalent backward-compatible binaries without the addded overhead of Vagrant and VirtualBox:

Unsigned binary distributions (currently tracking the master branch) are also available from the project buildbot's "artifacts" directory. These packages, however, should not be considered trustworthy or reliable in any way and are made available only for testing purposes by developers. Please excercise appropriate caution when using these files (ideally by downloading and running them inside a disposable virtual machine).

While Gridsync ultimately aims to provide an easy-to-use frontend for users of Tahoe-LAFS, at present, its interface only supports a very limited subset of Tahoe-LAFS's underlying features and potential use-cases (namely, it provides simplified means for joining storage grids, creating and sharing "magic-folders," and receiving status updates and notifications pertaining to those processes). Accordingly, users should not (yet) expect Gridsync to provide a complete backup solution or to serve as a stand-in replacement for other tools with robust sharing and collaboration capabilities.

In addition, it should be noted that Tahoe-LAFS's "magic-folder" functionality itself is currently considered "experimental" and has a number of known issues and limitations and open development tickets.

Contributions of any sort (e.g., suggestions, criticisms, bug reports, pull requests) are welcome. Any persons interested in aiding the development of Gridsync are encouraged to do so by opening a GitHub Issue or by contacting its primary developer: chris@gridsync.io

You should have received a copy of the GNU General Public License along with this program. If not, see <http://www.gnu.org/licenses/>.

The ongoing development of this project has been made possible by the generous sponsorships and grants provided by Least Authority (2016-), Internews/UXFund (2017), and Open Technology Fund (2019-2020).