Based on the classic "Dope Wars" game.

Prescription Wars is a multiplayer variation on the old DrugWars DOS game where players buy and sell illicit drugs.

I use this game as a framing device during pharmacy school classes dealing with prescription drug abuse as a public health issue. While students play the game I change the market environment to illustrate various strategies that governments have used to combat the problem. These changes might include increasing surveillance of Schedule II drugs, increasing the risk of arrest when selling on the street, efforts to decrease demand, etc. Students can then try to see how these strategies might affect the illicit prescription drug trade.

Some of the slides I use during the class are here.

Players take on the role of gangs that buy medicines from pharmacies and then re-sell them for non-therapeutic uses (on the street). The goal is to make more money than other players. Each teams' net profit (or loss) is displayed in real-time on the screen.

The six baseline medications are alprazolam, hydrocodone, oxycodone, amphetamine, oxandrolone and trazodone. Oxandrolone is an anabolic steroid (Schedule III) that is sometimes used illicitly by athletes. Trazodone, while prescription-only, is not a controlled substance. However, people have been known to crush and insufflate the tablets. The administrator (faculty member) can tailor the drug list however they like.

Players initially borrow money from the loan shark so that they can purchase medicines from pharmacies using fake prescriptions. While the cost of buying drugs from pharmacies stays constant, the risk of getting arrested increases with the number of units bought. Think of it as the pharmacist being much more suspicious when someone comes in with a prescription for 300 oxycodone tablets than they would be if the person was only getting 10 tablets. 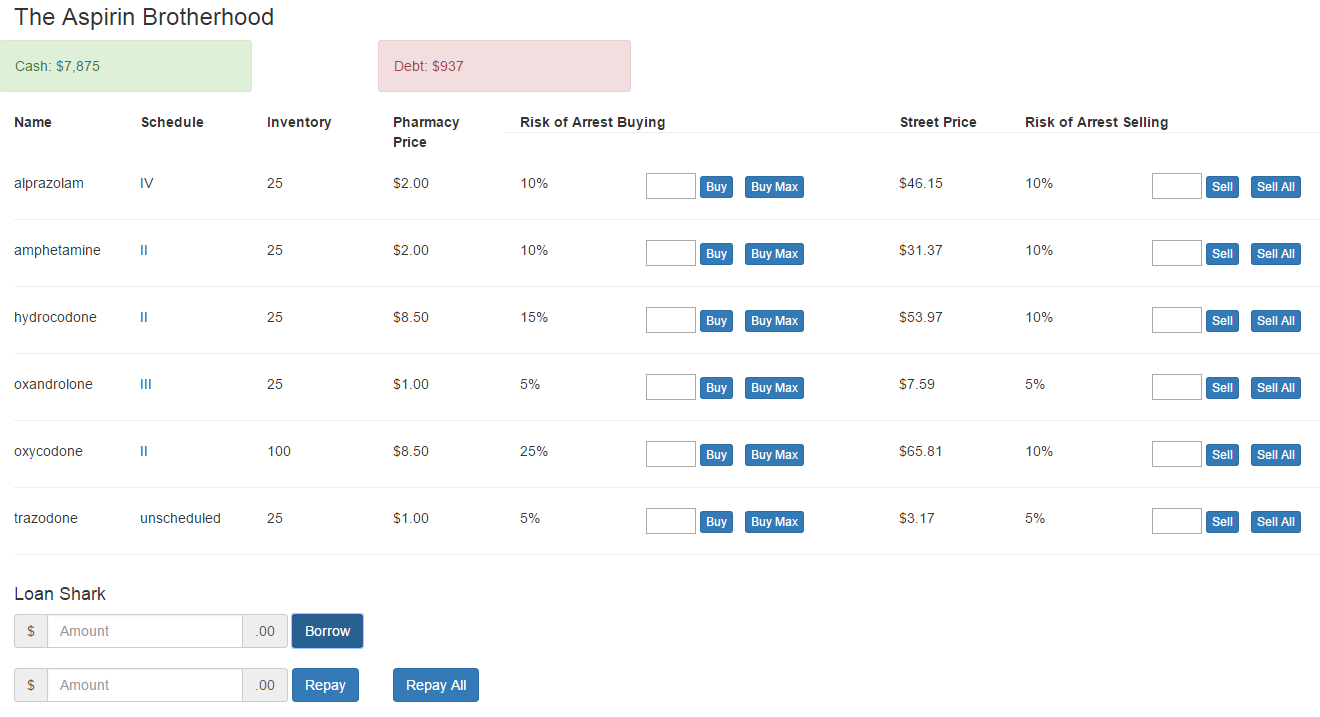 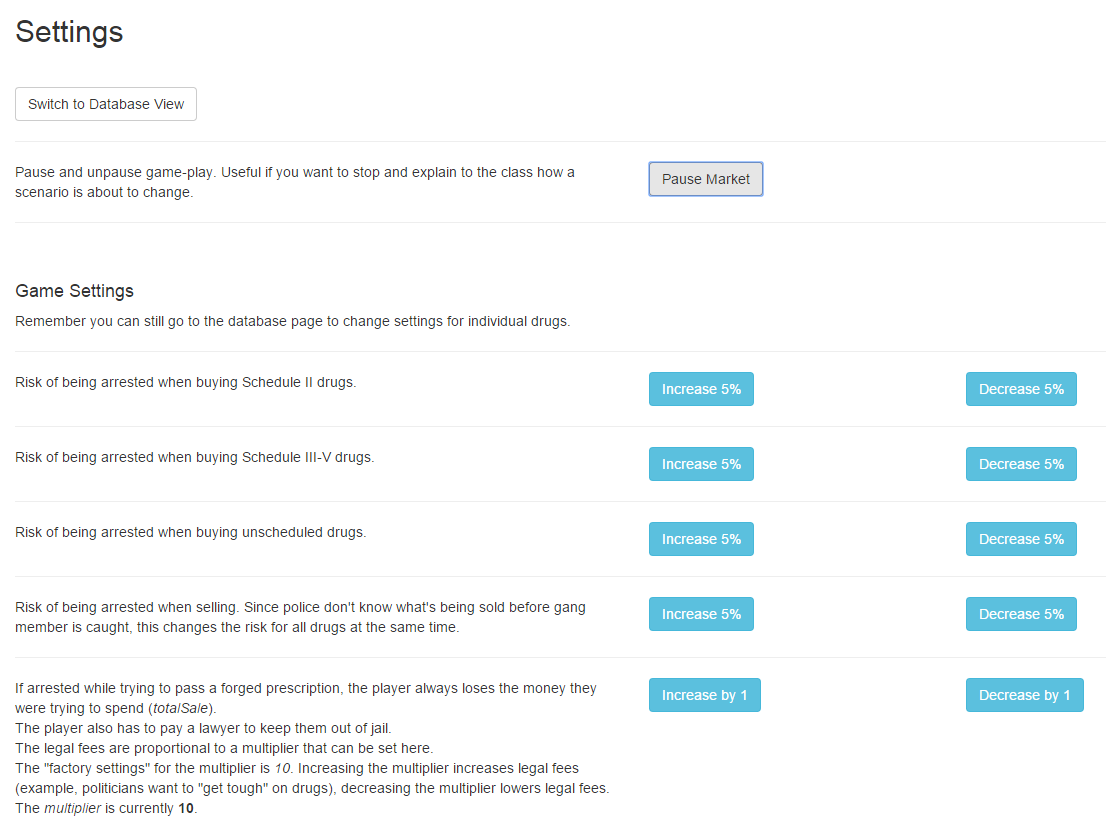 I spend the first part of the exercise orienting the students to the interface and gameplay. 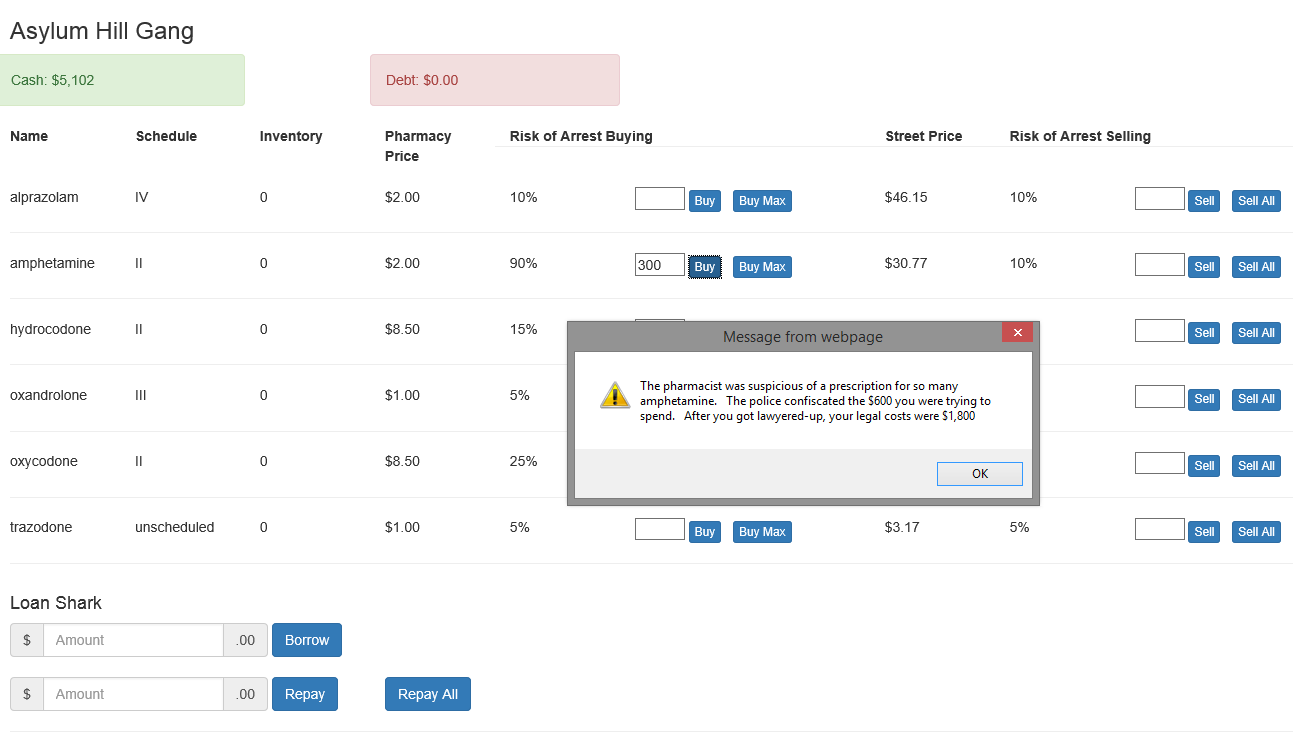 While the administrator can set risk of arrest, prices, demand, etc for individual drugs, there are also several pre-programmed scenarios.

The program is written in JavaScript using Bootstrap and the Meteor framework. Meteor was chosen to allow for simple deployment by faculty members with little programming experience.

Meteor lends itself well to deployment using a Platform as a Service (Paas) provider. These are services where the server itself is managed by the company and the user is simply responsible for uploading and maintaining the application running on it.

If you are a faculty member at an accredited health-care education school and would like assistance setting this up for your institution, please feel free to contact me.

Installation does involve some use of the command line. If you have no idea what "ls", "sudo" or "mkdir" mean, it might be best to get someone to help you. But, if you are feeling adventurous, go ahead and follow the instructions below.

Windows: The Windows installation process is pretty similar to what you see with installing other Windows programs.

Mac: The Mac installer requires that you use Terminal. You can find the icon to open Terminal in your Applications/Utilities folder. Once you have Terminal open, cut and paste the command from the Meteor website into the Terminal window. Then press return.

You can skip the "demo application" that Meteor asks you to create.

Step 3: Download the application files to your local computer

Go to the releases page to obtain the most recent version of the application. Download the zip file.

If you have a Mac, it will probably unzip the folder for you automatically.

If you have Windows, you'll need to unzip the folder yourself.

Step 4: Run the application locally at least once.

This involves going into Terminal (or Windows command prompt) and changing to the directory containing the Meteor files. It can sometimes be difficult to figure out the path to the files you just downloaded. Here's a way of doing it that might be easiest: Drop it anywhere in the Terminal/command prompt window.

Click with your mouse anywhere in the Terminal/command prompt window. Now press the Enter/return key.

Type the word meteor in the Terminal window. Press the Enter/return key. It will take a few minutes for the installation process to complete.

The program is now running on your local computer. You can access it by pointing your web browser at http://localhost:3000/

While you can open the application in a web browser while it is running on your local computer, you'll likely have problems getting other people to connect to it if it is not accessible to the outside world. So, we're going to stop the program on your local computer by holding down the Ctrl (or control) key and tapping c twice

Step 1: Open the application in your web browser using the provided URL

When the application is initially set up, the login | password is admin | admin.

Step 2: Go to the Settings page

Alternatively, there is a link in the upper-left corner of the screen to the "settings" page.

Once on the settings page, there is a link to the "database" page.

Go back to the "Settings" page. There is a link to Start/Pause the marketplace.

If you use this software for a class, please send me an email letting me know. This is just so I can include some information on my faculty activity report regarding how the software is being used.

Please review the software's license regarding lack of warranty and liability. We are not responsible for anything bad that happens as a result of your using this software.

Based on the classic "Dope Wars" game.