If you found this sort of project useful, come and checkout the Pothos project, where we continued to develop features such as message passing, python blocks, network distributed topologies, excellent APIs, minimal boilerplate and more...

Attention: This is the old GrExtras project page. The supporting branch for this page is called grextras_v3.6 Due to compatibility concerns, this branch will not be compatible with the GNU Radio 3.7 API.

The GrExtras project provides a set of extensions and features to the GNU Radio Project. GrExtras can be compiled against and used with any recent gnuradio installation. See the README for build and installation instructions, or dive right in with the Blocks-Coding-Guide.

This is smart. Python is not fast, but efficient to code. C++ is faster, but more effort is required. But why not code the signal processing blocks themselves in python?

So, writing signal processing in python is a time saver at the very least, and doing so isn't necessarily going to be a performance issue.

Using this feature, users can get access to all available API functionality in a typical C++ block. Users can:

The goal behind the PMT extensions feature was to make memory allocation more efficient when using PMTs for message passing. Just like the GNU Radio scheduler preallocates buffers to reuse at runtime, so should users have the ability to reuse PMTs to avoid allocation in the fast path.

The blob PMT is for passing chunks of memory, basically a pointer and a length in bytes. A blob can be used as a datagram (think UDP) to pass a bounded message from one block to another. Many of the message passing blocks in this project exclusively use blobs to form a message-passing domain between blocks (more on this below).

The PMT blob extensions turn blob from an immutable data type into a mutable type. Basically, a user can create an uninitialized blob, resize it, and get a writable pointer to fill the blob with data. This way, a user can allocate a pool of blobs a init-time, and simply reuse them at runtime, but more on that in the PMT manager section.

Also, python wrappers are provided for the blob type so users can get access to the blob's memory in python, as a numpy data type, and read from and write to the memory.

The PMT manager is actually not a PMT, but a regular C++ object. But what is special about the manager is that it allows the user to create a pool of reusable PMTs, and to track downstream consumption of PMT objects in the manager.

Also, the PMT manager creates the concept of backpressure for stream tags and messages. Because the user can block on the manager, waiting for PMTs to be returned, we can effectively block the upstream from processing while waiting on the downstream to use and free our PMT resource.

The PMT library obviously has its uses, but it can be cumbersome to make and later extract arbitrary netstings of PMT objects. Fortunately, when coding in Python, this is no longer necessary with the pmt.from_python and pmt.to_python function calls.

The message passing feature allows blocks to pass arbitrary messages to downstream consumers. Messages can be anything: data packets which allows the user to implement a packet layer, or control packets so the user can implement a control plane. The sky is the limit.

The ability to consume messages and produce messages is implemented as new API calls in the user's custom block. The source and destination of messages, much like streaming data, are determined by the top-level connections of the user's flow graph.

The downside to this implementation: GNU Radio streams do not implement a many-to-one model. If you need multiple message sources to one message sink, simply use the msg_many_to_one/m21 block that comes with GrExtras.

Using messages, the packet boundary is preserved between the TCP packet and the packet de/framer: 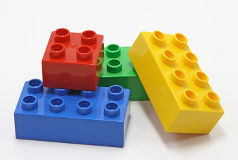 To support these various features, GrExtras has its own block interface. This interface supports message passing and is the basis for the python blocks implementation as well. GNU Radio offers gr_block, gr_sync_bloc, gr_decim_block, and gr_interp_block, each having a different API for different producer/consumer modes. However, this interface can provide one API for all stream production/consumption models of operation.

The GrExtras block interface has only one constructor and one type of work function to overload. All of the other familiar class methods are present. The user simply sets the auto consume mode and relative rate, and whoolah, the same work function API is applicable to all producer/consumer modes.

So, if you are not message passing, or writing blocks in python, you can still have fun coding to this new API. See block.h for more details.

Here at the GrExtras project, we like to find new and efficient ways to accomplish mundane tasks. Consider the example of the adder block in GNU Radio; for each data type we would like to support, a new block must be created, where most of the implementation is simply copy-pasta (gr_add_ff, gr_add_ii....).

Now, one my save some effort by generating each copy with a simple sed script. Or, we can make use of the native C++ features, namely, C++ templates. By using templates, we can write one interface, one templated implementation, and instantiate it for each data type we desire to support.

Not only was that simple and fun, but its also easy to integrate an alternative work function; for example, calling into a volk routine:

Here is a brief summary of the blocks GrExtras has to offer: