To simulate a merge conflict as if you were working with a partner, we have already created a branch called origin/merge-exercise in your repository when you cloned it. Run these commands:

Run git status to see what files need to be merged: 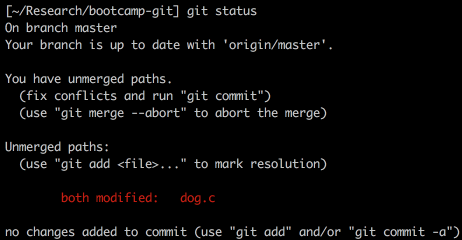 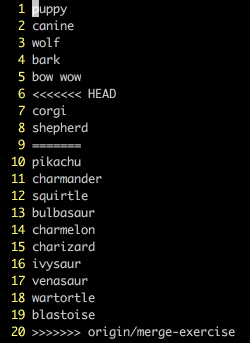 To fix a merge conflict, simply edit the file until it looks the way you want it to. This means removing all the >>>, ===, and <<< markers, and then save the file. This is how I resolved my conflict, but you may resolve yours differently.

Once you've edited and saved the file:

TADA! You're done! Take a look at your git history now: git lg

You'll noticed that the two separate branches have now merged together with your merged my dogs commit. Now push your commits to github and you're done with the exercise!

Go back to the main page.