This release has no feature changes to Holoscape, it simply packages the new v0.0.47-alpha1 holochain binary.

In this release, the default sim2h_url got changed accordingly. But this new default only gets applied on a fresh install.

IMPORTANT: If you have installed a previous version of Holoscape, you will need to either adjust your conductor-config.toml manually and set sim2h_url to the new value (ws://public-v4.sim2h.net) OR start fresh by removing/renaming your config directory. You can open your Holoscape config directory via the system tray menu -> Settings -> Reveal config directory.

This release has no feature changes to Holoscape, it simply packages the new v0.0.45-alpha1 holochain binary.

Important breaking change: Due to an incompatibility of the new HDK's serialization code, DNAs have to be recompiled with the dependency to the HDK crate updated to 0.0.45-alpha1. Otherwise links queries might not be responded with correctly.

This was mentioned in v0.0.6-alpha already. Here again for visibility:

Important breaking change: any config files created with v0.0.5 or earlier will NOT work because they point to a sim2h server that is not compatible with v0.0.42-alpha2. You can manually update the sim2h server to: ws://public.sim2h.net in your conductor config file if you want to continue to use a given Holoscape config directory.

This release has no feature changes to Holoscape, it simply packages the v0.0.42-alpha2 holochain binary AND it points to the new sim2h server which is compatible with that release.

Important breaking change: any config files created with v0.0.5 or earlier will NOT work because they point to a sim2h server that is not compatible with v0.0.42-alpha2. You can manually update the sim2h server to: ws://public.sim2h.net in your conductor config file if you want to continue to use a given Holoscape config directory.

Walk-through video of this version

This release is big step in terms of user experience.

The most prominent change is the introduction of a main window that is shown automatically on start-up, instead of having the whole application hide from the user behind a system tray icon. hApp UIs are shown as sub-views inside the main window and can be switched like tabs. 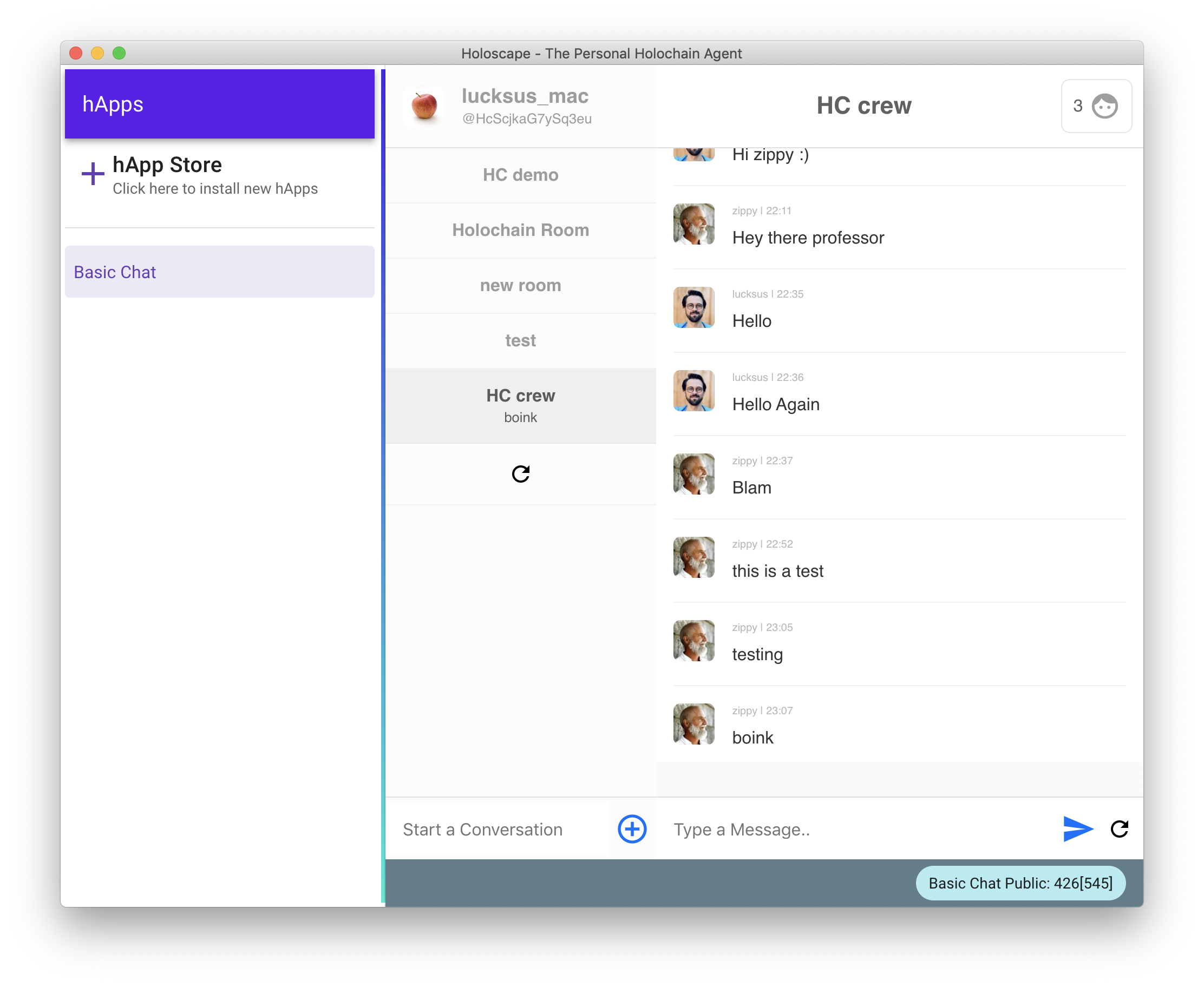 The hApp-Store / install view was reworked completely and is intuitively usable now. 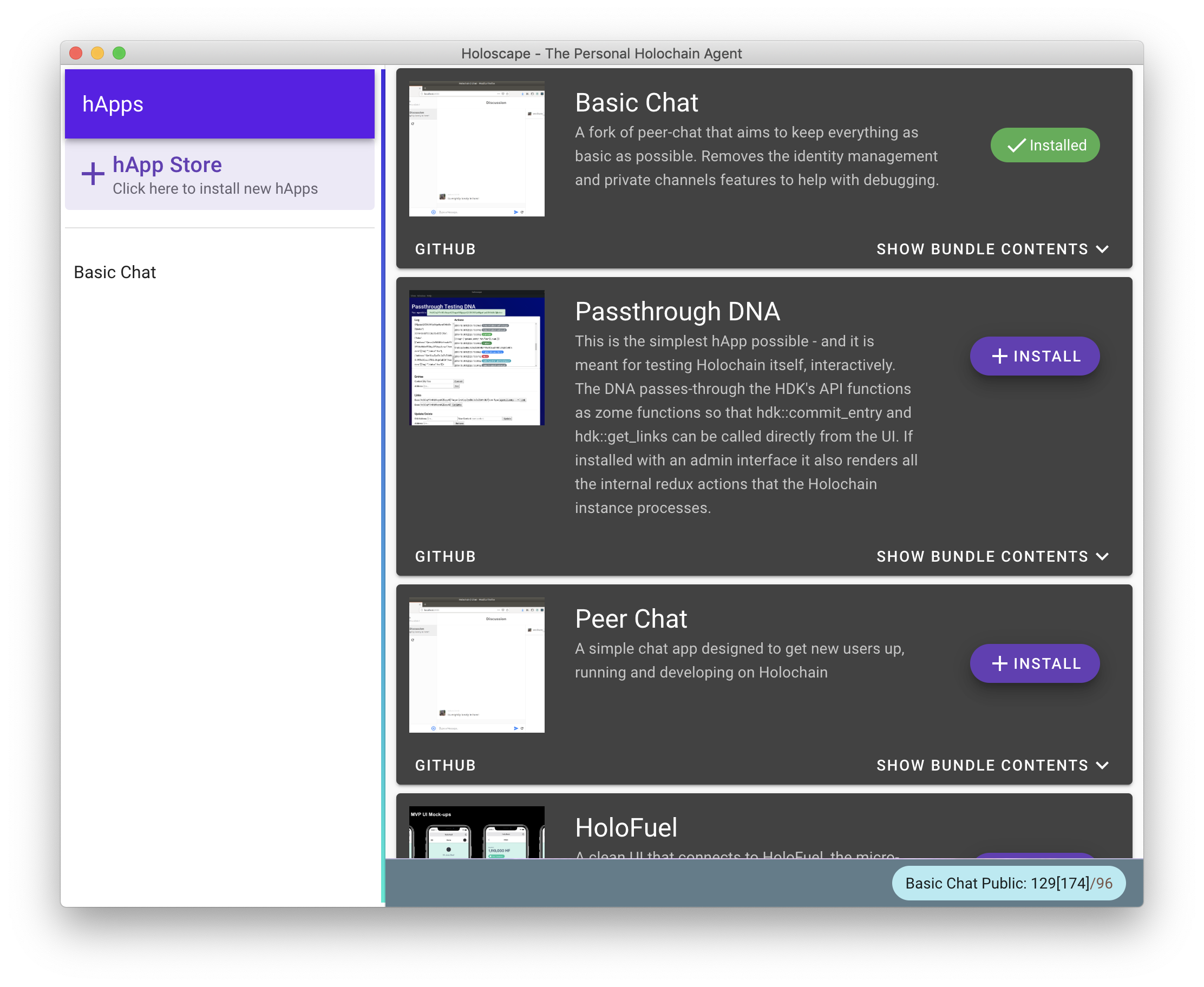 The instance debug view can handle larger data sets now and renders source chain, locally held DHT contents and the validation queue as a table each.

A really important feature that makes the debug view a tool that you don't want to miss when debugging your hApps is search. All tables are searchable now such that it is very easy to find out if the node is holding a certain entry or what entries of a certain type was authored. 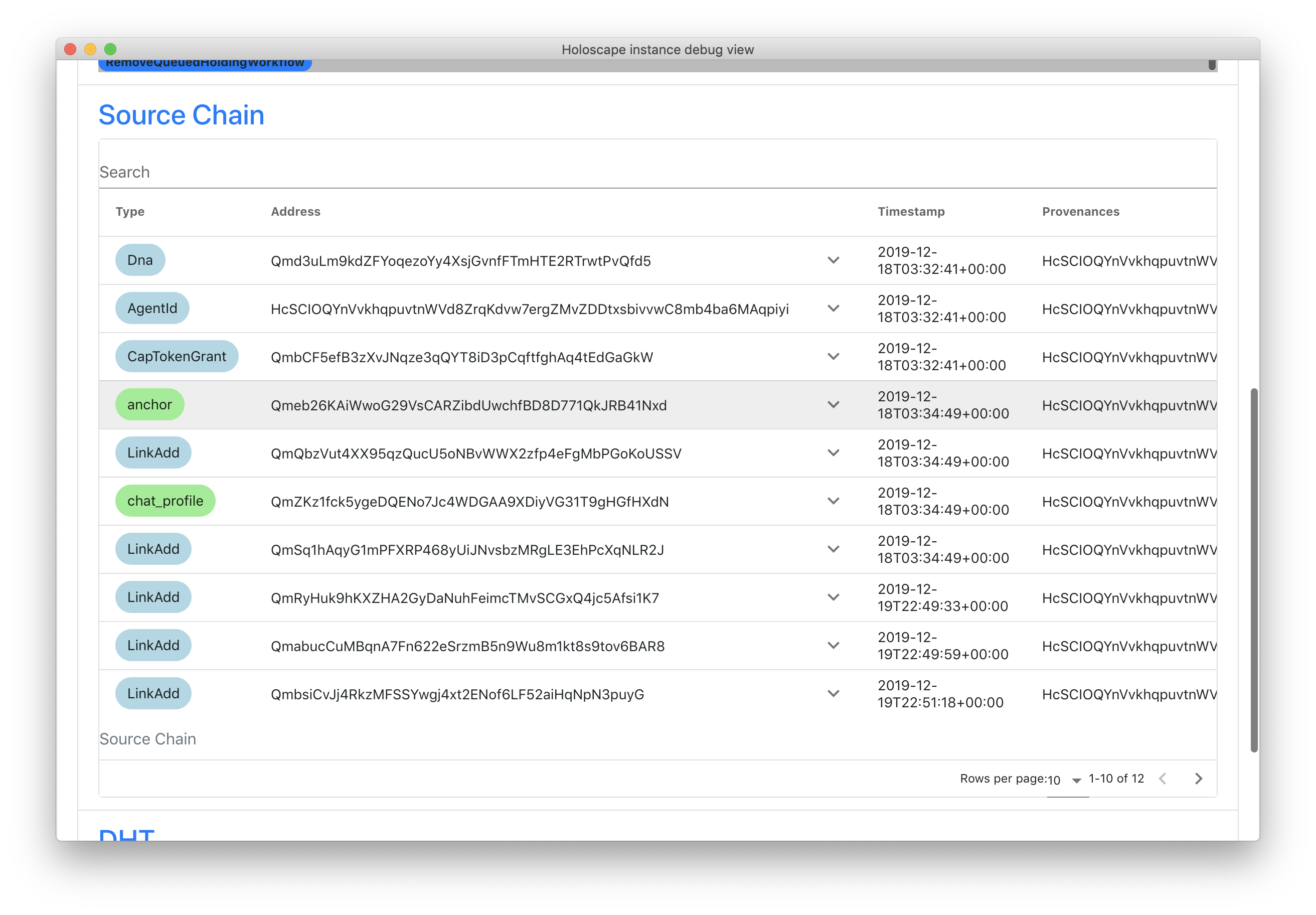 Binary release files below include Holochain binaries of v0.0.41-alpha3 which includes many changes against v0.0.40-alpha1.

This release contains only very few changes to Holoscape itself

There are major improvements to the included Holochain conductor

This release is much more stable and uses much less system resources (memory/CPU)!

Updating from an old version

If you ran v0.0.3-alpha before which included an older conductor version, you will probably see this panic in the log when trying to start the new version without clearing the config:

Despite the error, you can open the Holoscape menu by clicking the system tray icon and then choosing: Settings-default -> Reveal config directory and then delete that old directory and start with a fresh installation. 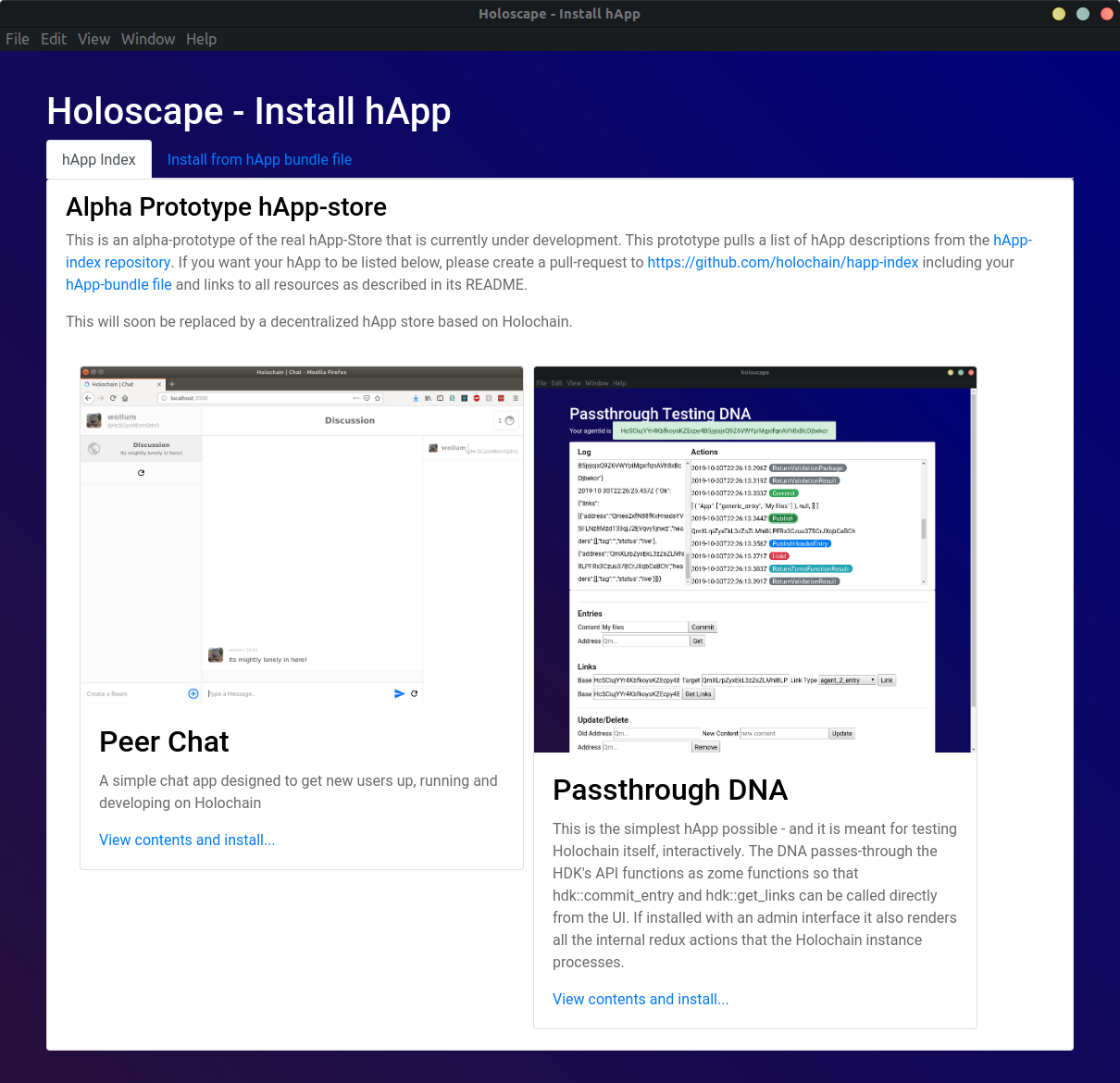 This release is a major step in terms of usability of the full Holochain stack. It includes a Holochain conductor v0.0.34-alpha which introduces a fully working sim2h test network implementation. Since Holochain now has two working (test/alpha) network implementations, this Holoscape version introduces a network selection dialog that lets the user choose between sim1h and sim2h (and later lib3h) on first use. 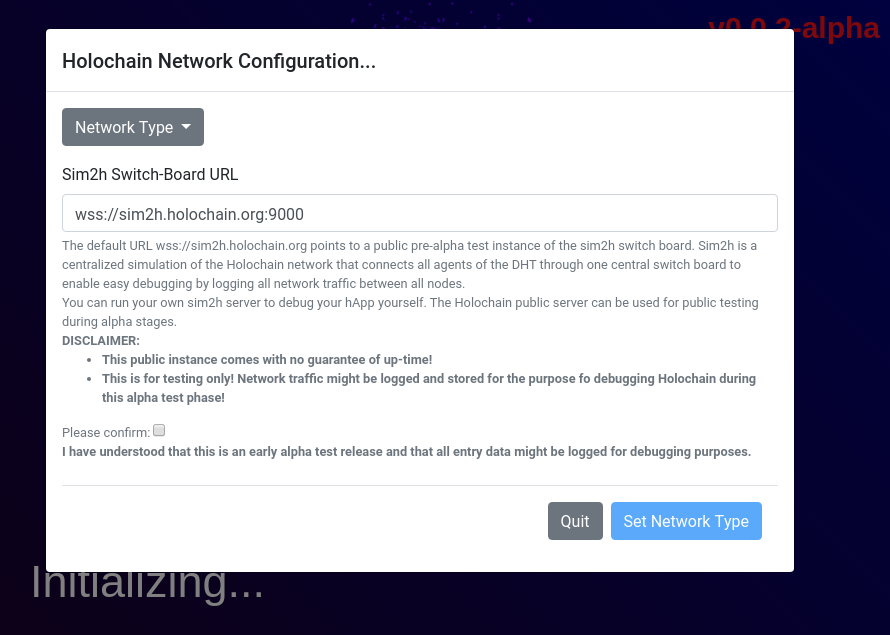 Included in this release is a default network configuration which is set to our pre-alpha public test server of sim2h.
This early version of our sim2h switch-board simulation is made available mainly for real-world testing of the network itself. For that purpose, all messages going through this central point are getting logged for debugging and performance analysis.

Though this early test version of our sim2h switch-board simulation comes with no guarantee of up-time, it enables first real-world and full-stack test runs of hApps. With this release we invite every hApp developer to help us test it all by deploying their hApps with Holoscape and engage in real-world, networked Holochain app usage! 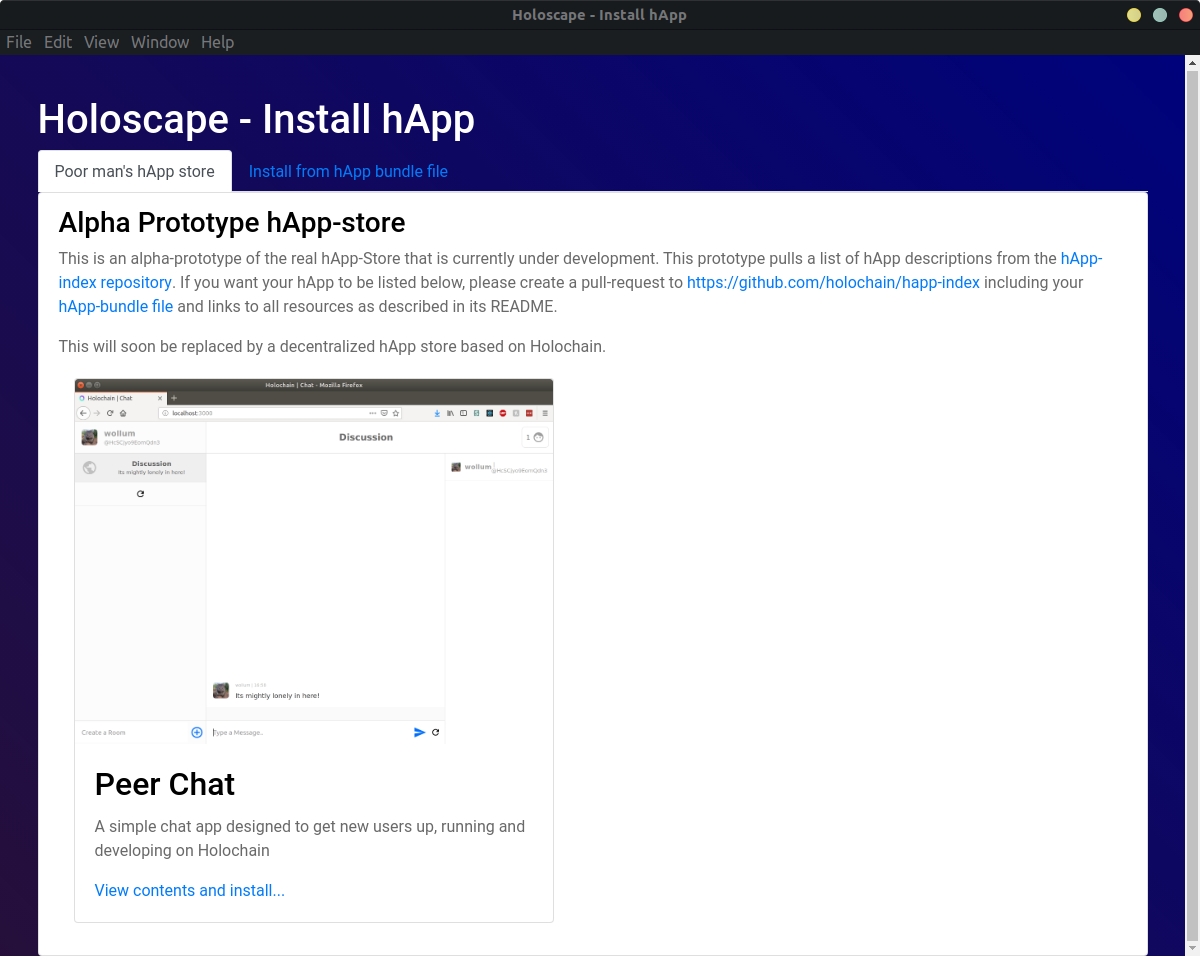 This release also introduces an alpha version of a hApp store that is based on our happ-index repository. hApps can easily be published through a pull-request on that repository. Holoscape renders a list of all hApps included in that index and provides an easy and simple way for installing them.

This is the first pre-alpha release of Holoscape. It includes everything needed as an MVP for the automatic install of hApps from bundles with just a few clicks.

But it also includes some pre-alpha bugs and UX quirks. Such as:

This first release is for a first test roll-out, mainly targeted at Holochain/Holo teams.
Everybody is welcome to try this and provide feedback through issues, pull-request and all other means!

What to do with it?

Download the app bundle for your platform, unzip it and run the executable in there (double click Holoscape.app on macOS or run the Holoscape executable on Linux).

After the splash screen, there will be a Holoscape icon in the system tray.

Download the example hApp bundle personas-and-chat_bundle.zip, and unzip it.
Choose "Install hApp..." from the Holoscape system tray menu. In the new window click browse and select the file chat.toml from the unziped personas-and-chat_bundle.zip. The dialog will now show the contents and immediately starts downloading the two DNAs which are referenced via HTTP link the bundle. Once the download is complete, the green "Install" button at the bottom will get enabled and you can install the bundle by clicking it. If this is your first time installing a DNA and agent, a popup will appear and ask for a passphrase. Remember the passphrase you enter as it will request the same again on next start up in order to unlock the agent keys. The whol install process will take about a 1 minute (mostly because hashing the password and creating and encrypting new keys takes some time).

After the install process is complete, you will find two new hApps in the "hApps" sub-menu of the Holoscape system tray menu:

Both items can be clicked to show the according hApp UI.