JPC is a fast modern x86 PC emulator capable of booting Windows up to Windows 95 (and windows 98 in safe mode) and some graphical linuxes. It has a full featured graphical debugger with time travel mode along with standard features like break and watch points.

To get started with JPC just run it with:
java -jar JPCApplication.jar -boot hda -hda yourdiskimage.img

or get a list of options by running:
java -jar JPCApplication.jar -help

To run some dos games easily, put them in a directory on your real computer and use JPC's ability to view a directory tree as a virtual FAT32 drive. For example, if some games are in "dosgames" in the directory where you expanded all the JPC files then type:
java -jar JPCApplication.jar -boot fda -fda resources/images/floppy.img -hda dir:dosgames
This won't save any writes you make to the virtual FAT32 drive. If you would like to sync write to the underlying files, run with -hda dir:sync:dosgames

The JPC debugger allows you to run x86 code step by step, use breakpoints, memory watchpoints, directly view the memory, cpu state etc in a nice colourful GUI. Once you've set your disks in the debugger (you can pass command line options identical to the Application or just use the menus), click "create new pc" in the File menu. Then to start execution click "start" in the run menu. 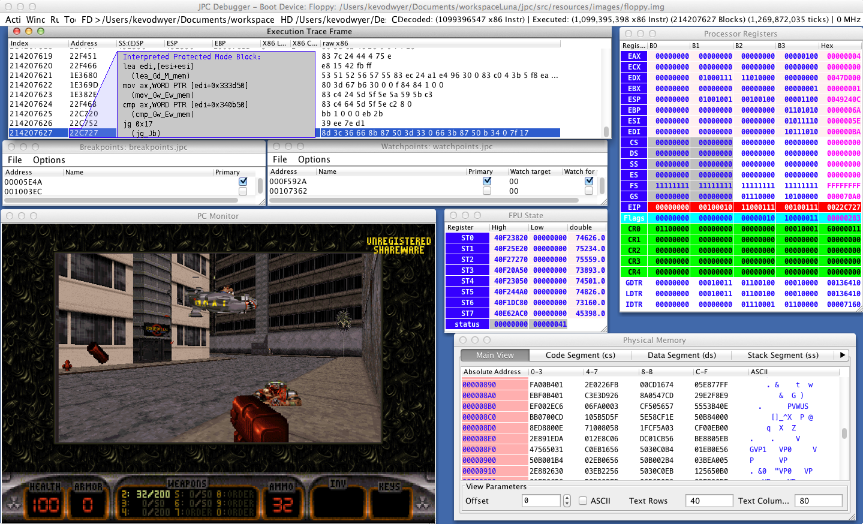