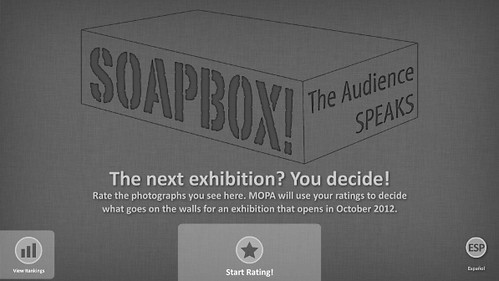 This exhibit formed the basis of Soapbox! The Audience Speaks, a crowd-sourced exhibition at the Museum of Photographic Arts (MOPA) in San Diego’s Balboa Park. For a three-month period from May-August 2012 visitors used the exhibit to rate photos on a Samsung touch table. The ratings were captured and used to determine which photos were included in the exhibition which runs from October 2012-September 2013. The museum chose the 40 highest ranked and a selection of the lowest ranked images. How does it work?

Soapbox! has a game-like interface that displays a random subset of 10 photos from a pool of 120 images from MOPA’s permanent collection. Visitors assign ratings to them which are saved in a database. The process of rating on the touch table encourages lively discussion, even among visitors who don’t know each other. Once a complete set of photos has been rated users receive a reward - a video of the museum’s director thanking them for their contribution. As more photos are rated, new video rewards are unlocked. 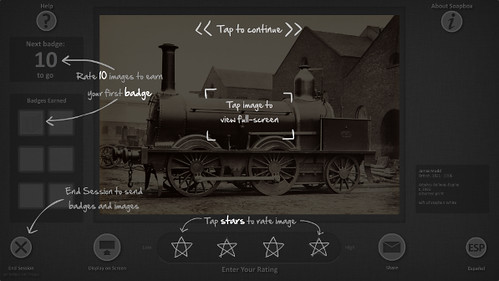 Background Soapbox! is based on My Gallery, an earlier Open Exhibits application created by UCSD students Wesley Hsu and Lance Castillo. My Gallery won a Muse Gold Award in 2012. My Gallery allows visitors to create their own personal gallery of 10 photos (from a set of 50) on a touch screen. Visitors can title and save their gallery and browse galleries created by others. Once saved, the gallery can be shared on a tile display wall so other visitors can see it. Wesley Hsu (User Interface Designer at MOPA) has kindly released Soapbox! to the community to demonstrate what is possible with Open Exhibits. 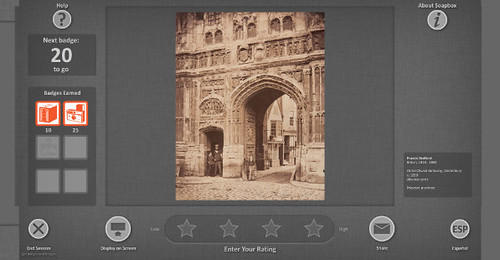 No source code is available.