A 3D simulation engine I've written for a school assignment.

The source code of this project can also be found on https://github.com/ikkentim/AIWorld

For the assignment of Artificial Intelligence for Games I've decided to build a full simulation engine in which simulations can be programmed using a scripting language. The scripting language which can be used is the Pawn Language which has been developed by Thiadmer Riemersma and is written in C. The Pawn language has been used by various gaming related projects, such as the SourceMod and San Andreas Multiplayer game modifications. Since my project is written in C# and the Pawn abstract machine is written in C, I've written a wrapper for it.

The solution found within the source(src) directiory contains three projects:

The AIWorld project contains a number of namespaces:

There are three classes which implement the IEntity interface. The Agent, Projectile and WorldObject class.

Agents are moving entities with a behavior specified by a script. The script can define the behavior of the agent by manipulating a couple of data containers within the agent, including a list of active steering behaviors, a stack of path nodes (See Path Planning chapter), a stack of goals and a dictionary of model mesh data.

World objects can be placed by the main script as obstacles for agents and projectiles. When creating a world object there is an option to specify which meshes of the model should be visible and to supply a rotation, scale and translation matrix.

AIWorld requires scripts to be written in the Pawn Language. A language guide can be found in docs/Pawn_Language_Guide.pdf.

In the engine, there are three types of scripts. Each of these scripts have access to some specially crafted native functions to allow the script to fulfil its purpose. Some services (see the Services chapter) also provide functionality to specific scripts.

The main script creates the terrain, objects, agents, graphs and global variables. It can also handle user input, such as mouse clicks and key presses. The main script instance is created by the main Simulation class. To this script only a limited number of native functions are available. These functions can be found in the bin/include/a_main.inc file. Functions provided by the GameWorldService, ConsoleService, DrawingService and SoundService are also available in this script.

The agent script defines the behavior of an agent. The agent script instance is created by an instance of the Agent class. To this script a large number of native functions are available. These functions can be used to set properties, manage the active steering behaviors, manage the goals, change the position and add path nodes to the path stack (see the Path Planning chapter) of the agent. There are also a number of native functions available for calculating the distance to a point and transforming vectors between local and world spaces. These functions can be found in the bin/include/a_agent.inc file. Functions provided by the ConsoleService, DrawingService, GameWorldService, SoundService and FuzzyModule (see Fuzzy Logic chapter) are also available in this script.

The goal script defines the behavior of an agent while the goal is active. The goal script instance is created by an instance of the Goal class. To this script a couple of unique native functions are available. These functions can be used to manage the subgoals of the goal. These functions can be found in the bin/include/a_goal.inc file. All agent script native functions are also available to a goal script. Functions provided by the ConsoleService, DrawingService, GameWorldService, SoundService and FuzzyModule (see Fuzzy Logic chapter) are also available in this script.

The camera service contains various methods to allow users to smoothly operate the camera. When the camera is manipulated, it automatically updates a view matrix. The service also watches the graphics device for changes and updates the projection accordingly.

The particle service has sadly not been implemented yet. It is meant to allow scripts to spawn particle effects in the game world.

The sound service provides methods and native functions for scripts to play a sound effect at a position within the game world. 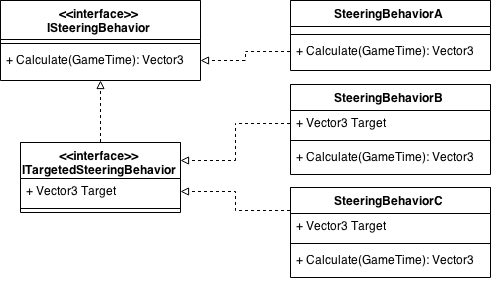 The different steering behaviors are combined by multiplying the calculated force by the weight, summing these values and then truncating it to the maximum force for the agent.

The alignment steering behavior attempts to align the heading of the agent into the same direction as nearby agents. The script can specify which agents to take into account by specifying a variable name for the agents to have and the value it should contain.

The arrive steering behavior attempts to steer the agent towards a specified target and stopping it at the target position.

The cohesion steering behavior attempts to let the agent stay close to nearby agents. The script can specify which agents to take into account by specifying a variable name for the agents to have and the value it should contain.

The evade steering behavior attempts to keep the agent away from agents within a specified range. The script can specify which agents to take into account by specifying a variable name for the agents to have and the value it should contain.

The explore steering behavior attempts to zigzag the agent across the specified area.

The flee steering behavior attempts to move the agent away from a specified point.

The pursuit steering behavior attempts to tail the specified agent.

The seek steering behavior attempts to go straight towards the specified point at top speed.

The separation steering behavior attempts to keep some distance from nearby agents. The script can specify which agents to take into account by specifying a variable name for the agents to have and the value it should contain.

The stop steering behavior attempts to stop the agent with the specified breaking weight.

The wander steering behavior attempts to let the agent wander in a random, natural way.

When an agent generates a path, the resulting path nodes are pushed to the path stack in reverse. This way, the script can keep popping nodes off and seeking towards it until the stack is empty.

Graphs are filled using a self invented algorithm. The algorithm is displayed in the following pseudo code:

The A* algorithm implemented in the engine works according to the following pseudo code:

The algorithm has, for example, built the following path: 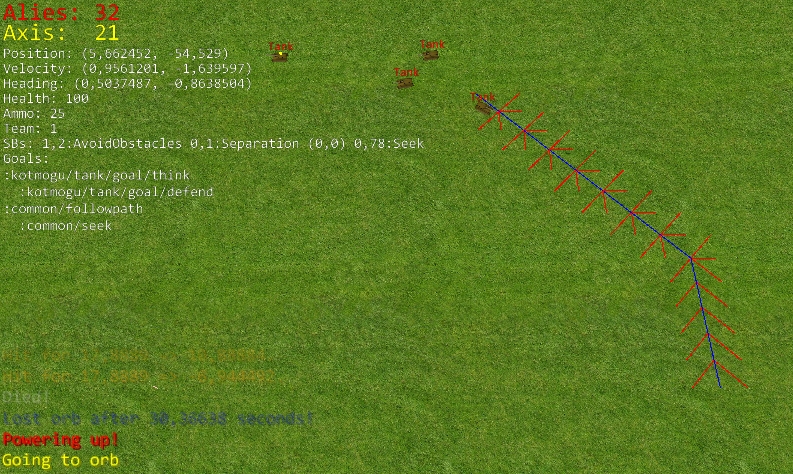 The blue line is the path the algorithm has generated.

I meant to display all evaluated nodes using red lines, but due to a lack of time it currently only shows the nodes whose previous node is within the path.

I've implemented the fuzzy logic classes mostly in the way the book Programming Game AI by Example describes it. I have however moved the data container of fuzzy rules to the consequence variables of the rule. Because I wanted to create and use the fuzzy logic from the script, I've written a simple fuzzy logic interpreter which can be found inside the FuzzyModule class.

Temple of Kotmogu is a gametype(battleground) in the popular game World of Warcraft. The rules of the gamemode has been recreated within this simulation. Two teams of tanks battle to collect the yellow orbs. Every few seconds your team earns a few points per orb in its possession. The closer the carrier of the orb is to the center of the map(the center is the most powerful area), the more points it receives per every few seconds. Every tank has a limited number of ammo and health. The tanks will attempt to shoot down the other team. If a tank dies and it carried an orb, the orb will be returned to its point of origin. A few seconds after a tank has been shot down, it will reappear at its spawn point.

Every few seconds a plane arrives with a carepackage which is dropped at a random position on the map. The carepackage contains a random amount of ammo or a repair kit for a tank to increase its health.

The tanks have a number of goals:

All goal scripts are heavily commented and can be found in bin/kotmogu/tank/goal.

By clicking on a tank you can selecting it. Selected tanks display their debug information (including the active path) on the screen.

By right clicking while holding the left shift while you have selected a tank, the tank will calculate a path to the clicked point and will navigate to there.

By holding the F9 key all graphs will be displayed on the screen.

In the simulation, there are currently 14 fuzzy variables:

Because of the big number of FLV's and the short amount of time I have to finish this project, I wont add the graphs for every FLV to this document. The graphs are created and can be found in bin/kotmogu/tank/common/fuzzy.inc at line 28.

In the think goal of the tanks I use these fuzzy variables to decide which action to take:

Due to my idea of building a whole simulation engine instead of just this one simulation, I've had to spend a lot of time working on this project. Because it was such a big project and the time was limited there are some things I've not had time for to implement, improve or fix.

I have, however, had lots of fun working on this project and I have learned loads of stuff about artificial intelligence in games. I've no encountered any big problems in this project. The biggest challenge has been to write a wrapper for the pawn abstract machine which in the end works perfectly and very fast.

A number of the following items are also annotated in the source code.

The source code and guides of the Pawn Language can be found on:
http://www.compuphase.com/pawn/pawn.htm

The rules of the Temple of Kotmogu can be found on:
http://us.battle.net/wow/en/game/pvp/battlegrounds/temple-of-kotmogu

Various models and sounds were derived from:
http://opengameart.org/

During research I've used the code of Programming Game AI by Example which can be found on:
https://github.com/wangchen/Programming-Game-AI-by-Example-src

A 3D simulation engine I've written for a school assignment.