A utility that recommends who to ask for a code review.

This preview features my local changes in the pre-commit gem.

A name inspired by the SNL character Bill Hader played: 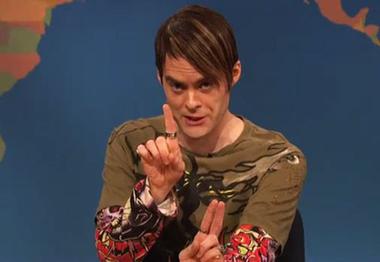 SNL Stefon always gave advice on the best places to go to in the city. Stefon the gem will do the same: he tells you who to go to for a code review (or send a PR to) based on whose code you changed most.

To get the top 4 people to send a code review to.

You can use the -l option to change the number of people Stefon's recommendations are limited to: Execute:

To get a detailed report of code that you changed, execute:

which is identical to stefon -f, to see something like:

The narrative of stefon's code

Stefon lives in the shell. We ask for suggestions by interacting with the CLI (using the trollop gem for getting cmd line options), the CLI gets an Editor to write a script for Stefon. The Editor has a team of Surveyors that look for certain changes in the codebase (AddedLines, DeletedFiles, etc.). To detect these changes, the Surveyors use GitUtils (a wrapper for cmd line git interface) and GritUtils (a wrapper for another gem called grit), and store scores in a SurveyorStor, which acts like a Hash. The Editor is responsible for assembling the team, telling them how detailed of a report he needs (--full-report option) and for how many users (--limit option), and combinning their reports, so that the CLI can print it out on the screen.

A utility that recommends who to ask for a code review.