Duality is a plugin based games development framework designed to be a minimal interface into which more specific or complex packages are "plugged in". Since Vorbis is used as Duality's primary audio compression mechanism, it has built in support for importing OGG Vorbis files. It does not provide any mechanism to load or save any other audio file formats.

ExtendedAudioImporter uses libsox to import audio files of various flavours. The formats exposed here have been confirmed working to some degree. Since libsox actually allows many more formats to be loaded, new formats will be exposed as and when they have been reasonably tested.

ExtendedAudioImporter can be installed via Duality Editor's package management dialog, or by cloning this GitHub project and building in Visual Studio. 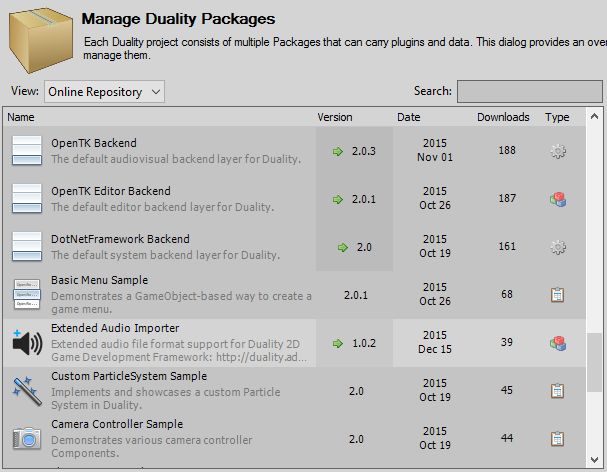 ExtendedAudioImporter can be installed via Duality Editor's built in package manager.

ExtendedAudioImporter is made up of the following parts:

ExtendedAudioImporter will pick the correct SoXWrapper for your platform at runtime.

The following dependencies must be gathered prior to building ExtendedAudioImporter manually:

Dependency folders should be renamed as follows (strip off version numbers):

Basic Visual Studio 2013 project files are included to compile the essentials. These were borrowed and adapted from libsox. Each project file has an x86 and x64 version to make compiling using a single configuration in C# easier (Any CPU).

All projects produce static libraries and are linked into the SoXWrapper project.

...are not currently supported. Contributions most welcome!