A switch for showing and hiding addresses that have been used has been added to the Receive screen.

From this release, Daedalus installers will be signed with IOHK’s organizational PGP key. Also, on the Daedalus download web page, a checksum will be published for each installer with instructions for verifying their signatures and checksums. This will enable users to verify the integrity of an installer so they can be sure that they are using the genuine, unmodified, software.

The size of the output application bundle built from the source has been reduced by a factor of 10 by not embedding any font, image or other static assets. This reduces the memory usage by the same factor, a change that will be noticeable for users running Daedalus on slower machines with a small amount of memory. 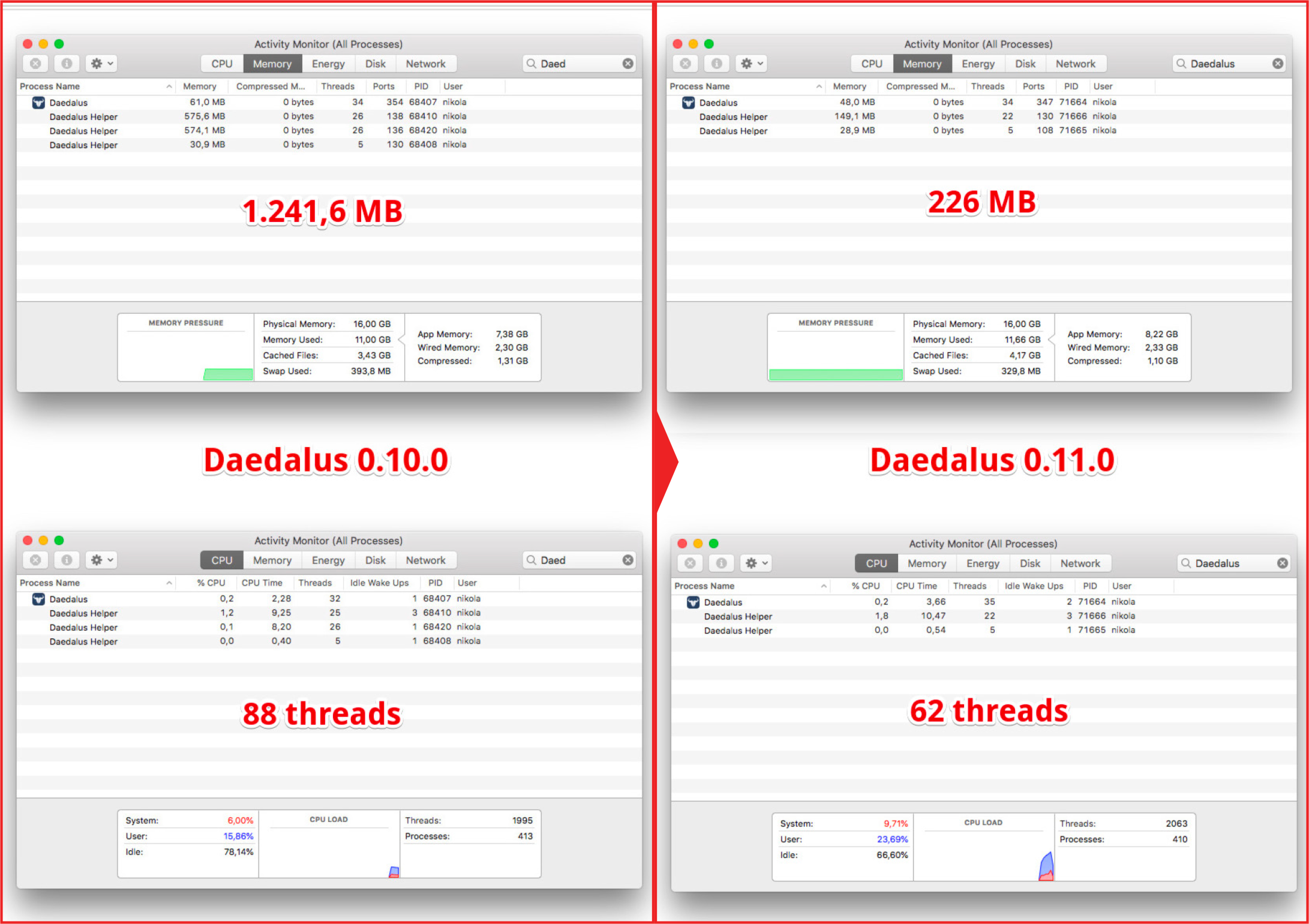 The font used in Daedalus has been changed to Google’s Noto Sans. This fixes a problem rendering kanji characters on Linux in preparation for the first Daedalus Linux release.

About dialog changed to overlay

The About dialog is no longer a standalone window and is now in an overlay on the user interface. This reduces the number of rendering processes Daedalus uses and reduces memory use.

The Ada redemption feature is rarely used because most people have already redeemed their Ada, so the icon has been removed from the main menu. It is now available from the system menu.

A subset of endpoints from the Cardano wallet API, used by cryptocurrency exchanges, was moved to the new Cardano REST API v1. The remaining endpoints will move from v0 to v1 in the next release. Cryptocurrency exchanges are encouraged to move to API v1 because the old API is now regarded as deprecated and will be removed in future versions (CBR-101).

The generic message returned from Cardano node endpoint calls when the charset was not specified is replaced with a more descriptive error message to help users of the API troubleshoot the problem.

Support for sending raw data on the network

It is now possible to send raw, CBOR serialized data to the network using the diffusion layer. Previously, the data had to be serialized before sending it to the network, which slowed things down.

The formal specification of a wallet for Cardano (or any UTXO-based cryptocurrency) is available here: https://cardanodocs.com/technical/formal-specification-for-a-cardano-wallet/.

Faster sending and receiving of blocks

Sending and receiving blocks on the network now works better. First, deserialization performance has been improved by optimizing memory use. Next, blocks are now downloaded concurrently without batching. Finally, block traversal is optimized by the introduction of 'forward links', which removes the need for header retrieval and serialization.

Block storage is now optimized by consolidating block and undo data in a single file. This change reduces disk use and improves performance when reading and writing blocks. In later Cardano versions, block storage will be improved even more, so this is only an interim solution.

Time error between user’s computer and the network

The endpoint (/api/settings/time/difference) for calculating the time difference between a user’s computer and Cardano network was returning an incorrect value in some cases. This was because the calculation was not properly handling the time needed to request the current time from NTP servers and to get the response. As a result, some Daedalus users were prevented from using their wallet because Daedalus cannot be used if there is a time difference of more than 15 seconds. This issue has been fixed.

A blank screen is shown instead of the user interface

Some graphics card drivers are rendering a white blank screen instead of the user interface.

Some QR code readers are unable to scan QR codes from paper wallet certificates because there is too much error correction data in printed QR codes. 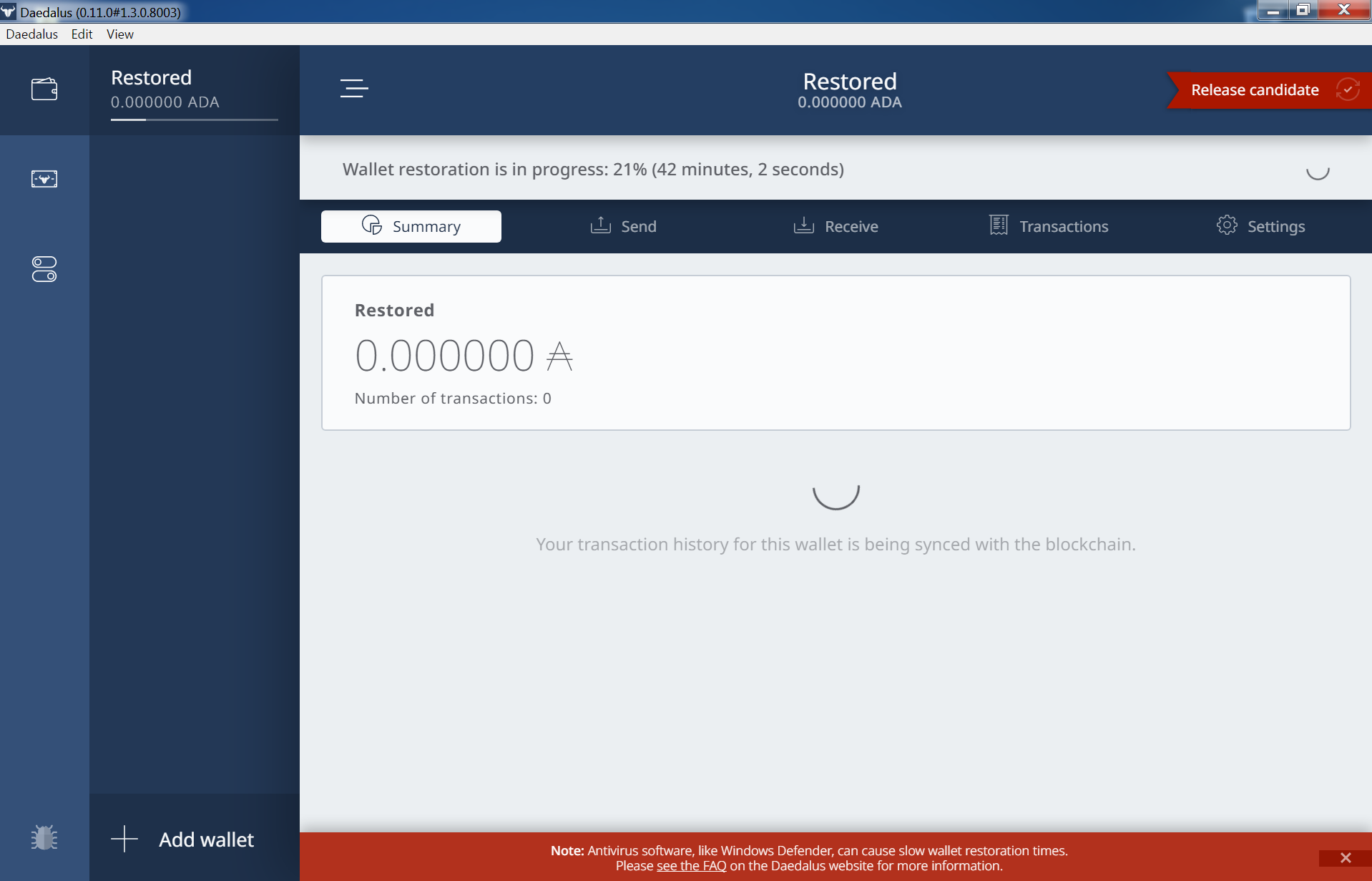 Installers are signed with IOHK's organisational PGP key with this fingerprint: D32587D4090FE461CAEE0FF4966E5CB9CBFAA9BA.