What is ADB backup/restore?

The Android operating system offers a backup/restore mechanism of installed packages through the ADB utility. By default, full backup of applications including the private files stored in /data is performed, but this behaviour can be customized by implementing a BackupAgent class. This way applications can feed the backup process with custom files and data. The backup file created is a simple compressed tar archive with some Android specific headers. Optional encryption is also possible.

So the danger is in a few words: an innocent-looking Android application can install new applications with extra permissions without the user's consent.

The Backup Manager can be exploited through simple reflection to inject the arbitrary additional APK:

The vulnerability resides in the backup mechanism of the Android operating system. Anyone using the adb tool for creating and restoring backups of their handsets might be affected. One could think that command line applications are used by geeks or programmers only, but not necessarily, there are Windows GUI applications which rely on the same technology behind the scenes when creating backups or restoring them. The malware might come from an innocent looking game without any suspicion as it claims to need no permissions at all. As soon as backup was created, the archive is "infected". The injected application can use any (non-system) permissions, for example starting automatically at boot or sending SMS messages.

In this repository you can find an application along with it's source code which can demonstrate the vulnerabilty. It was tested on Android 4.4.4 and Android 5.1.1. 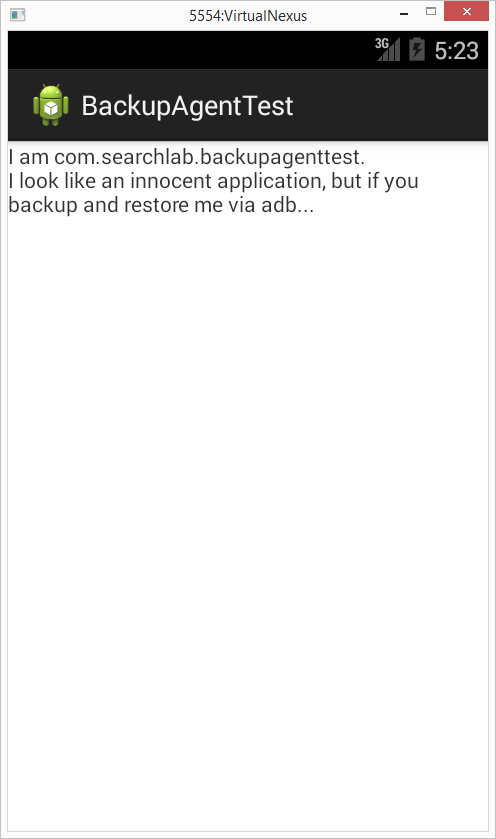 This application does not require any permissions.

Step 2: Use the following command to create a backup of this package

(You could create a full system backup as well, the exploit would be still successful.)

Step 3 (optional): If you want to examine the backup archive just created, use the ABE tool: 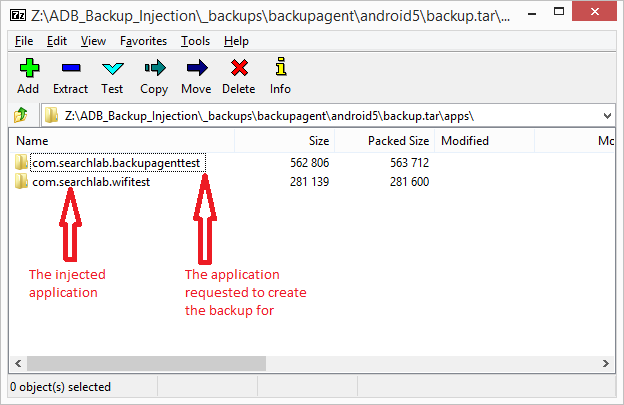 In the tar file you will find the injected second application (com.searchlab.wifitest).

Step 4: Use the following command to restore the archive:

Since the backup.ab file already contains the injected application, it will be restored (installed) as well. 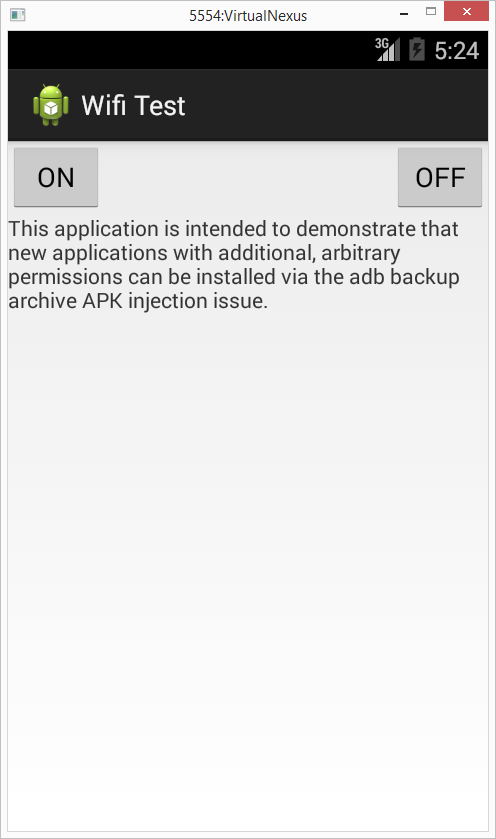 SEARCH-LAB Ltd. responsibly reported this threat to the Android security team. At first, Google did not acknowledge the issue being security relevant. Later they kept requesting to hold off publishing as they needed more time for further investigation, but as of today, July 8, 2015 the bug was still not addressed. The most important milestones of the issue are listed in the next lines:

2014-07-14: The vulnerability was disclosed to the Android Security Team

...Couple of additional emails in this thread, Google kept investigating the issue and requested holding off the publication

2014-10-15: Google answered that the issue did not get fixed in the L release and requested to hold off publishing it. (Got a promise about asking around for a mug)

...Few more ping-pong emails periodically without any new info (neither a mug)