A Rust-based A-life playground, for Linux (tested on Devuan Ceres) and Windows 10.

Here's roughly how the simulation works. There are 3 types of agents in the world:

These are spawned at a fixed rate by Emitters. Their lifespan is very short and their only purpose is to provide nourishment for the Minions. Minions can detect nearby Resources with their sensor, and detect the nearest Emitters at any distance.

These are the little rustoid critters.

The intriguing bit about all of this is that AI, body shape and brain are bred via artificial natural selection - for want of a better name. Practically all observed behaviour is emergent.

Eventually I plan to plug in some sort of gameplay and release as a free game. Strictly evening/weekend toy project: don't hold your breath.

You can interact with the simulation by shooting Resources at the minions. Gamepad supported.

This project started as a test bed for the Rust language and toolchain, GFX and box2d wrapper, and could have not existed without those.

Some rust-oids competing for territory and resources, and the player messing up with them! 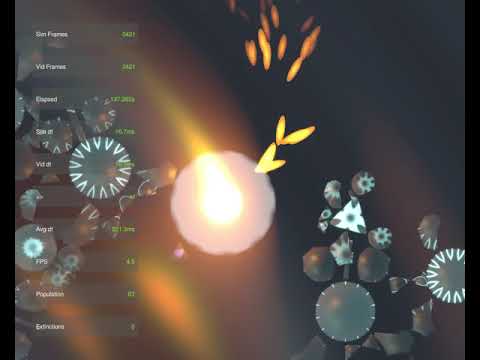 On Linux, aside from the full Rust toolchain, the following packages are required (I use apt install, adjust for your own distro):

cmake can be installed via https://scoop.sh/ typing scoop install cmake

Building Windows dependencies is a tedious yak shaving exercise. For convenience, I am redistributing parts of open source projects in the form of headers and prebuilt x64 static libs for Windows 10. Links to the source code are provided below as for licences:

Gamepad is supported (tested with DS4, in Windows via DS4Windows)

For convenience, I have added some FreeFont assets, which are used in the Conrod GUI. https://www.gnu.org/software/freefont/