Ever downloaded a program that didn't come with an installer? Stall is a command-line tool that can automagically install, or remove, your favorite Windows desktop apps.

After you've downloaded the binaries, open up CMD and run

The format of commands should be: stall -e program [-i icon] [options] folder

By default, the paths of program and icon are relative to the root folder. If you wish to override this behavior, prepend : to your path to make it relative to the current directory (or absolute).

Let's try installing an app in real life! As an example, ILSpy is one program that doesn't come with an installer. To install, download and unzip the binaries from their site, and run

which should install ILSpy.

If you want it to show up nicely in Control Panel, you could alternatively run

which shows up as 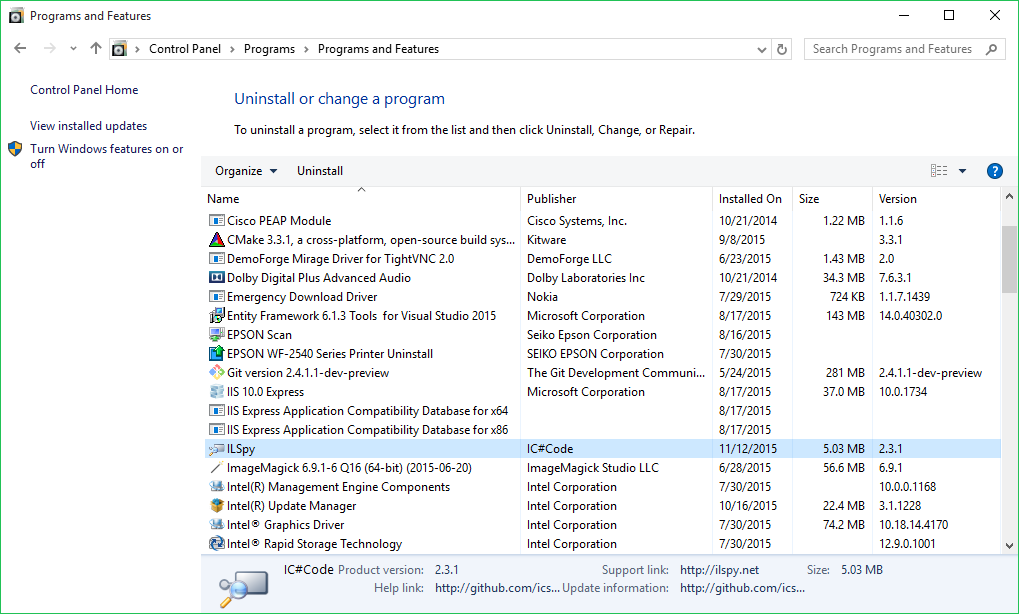 Have an app, or apps, installed that you'd like to remove? Running

Unfortunately, the names of the apps need to be the ones listed in the Control Panel, so this is less intuitive than it sounds.

This will prevent the apps from showing up in the Control Panel, but won't actually uninstall them. Be warned however, this cannot be undone.

Then open up Stall.sln in Visual Studio, toggle the configuration to Release, and build.

Alternatively, if you prefer a command-line interface, open up CMD and run

Once that's finished, the binaries should be in Stall/bin/Release. Follow the steps mentioned above and you'll have a fresh copy of Stall installed.

Stall is distributed under the BSD 2-clause license.

What's the difference between Stall and Squirrel?

In short, Squirrel is meant to be a framework for self-updating apps. Stall can install apps without having to modify the code of the app itself, but doesn't manage app updates.

If your app requires a newer version of .NET to be installed (e.g. runs on .NET 4.6 but targets Windows 7), then you should probably use Squirrel as Stall doesn't offer that kind of functionality.

How does Stall compare to Windows Installer or ClickOnce?

plus the points mentioned with Squirrel.

I followed the steps here, but Stall isn't in my PATH.

Usually, opening a new command prompt window should fix this.

What if my app icon is embedded in the .exe file?

How do I upgrade to a newer version of Stall?

Just follow the steps in Getting Started, but run this at the end:

The --overwrite flag tells Stall to overwrite any existing files during the installation process, if needed.